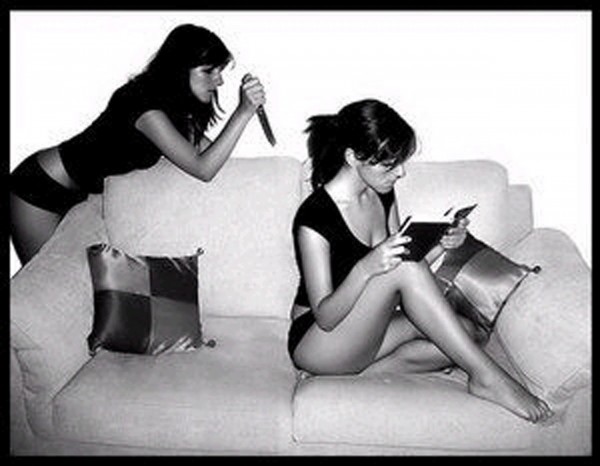 Today, a beautiful, smart, and sweet friend of mine asked me the following question, “How do you deal with a backstabbing best friend?” As I thought to myself, “Why would anyone stab her in the back?  She’s an amazing person,” I then realized that because she is an amazing person, she becomes a target for envy.
Self help books tell you all about how to “confront, listen, accept, and forgive”. In other words, “When your dear friend lies to you, badmouths you, and sticks her knife five inches into your back, you must smile, understand her, hug her, and forgive her . . . be even nicer than you were before so that her envious nature doesn’t get the best of her again.”
Whatever!
I say: when garbage starts to stink, throw it out!

What is the profile of a backstabber?
The backstabber is a coward; a non-confrontational person that loves to hate you and hates to love you. As this intelligent quote says, “Backstabbers are passive-aggressive. Confrontation to a backstabber is like sunlight to a vampire. So when they’re threatened, they lash out sneakily.”
The backstabber studies how you talk, dress, act, live . . . and tries to do the same. Of course, she fails at it miserably. When she realizes she can’t reach to your level, she tries bringing you down to hers. By saying bad things about others, the backstabber feels better about herself. The bigger the stab, the closer the friend. It’s all emotionally connected.

Why is backstabbing more common among women?
As I said, it’s all emotionally connected; women being the more emotional species. Men and women come from two different schools of thought. One guy can be angry at another. They can verbally attack each other for a bit (confrontation), followed by a fist fight (more confrontation), and all will be resolved. They will either get over it like nothing happened or go their separate ways. Why? Because men are simple. They have no time to scheme and hover around a “frenemy” like a vulture, waiting for the right moment to attack. They don’t have the energy for that like women do. Funny enough, men are insulted everyday for being dogs . . . but women forget to what degree they can be b****es.

Why do people backstab?
It’s simple: because they have low self-esteem, they are envious, vindictive, angry, passive aggressive . . . The list goes on. These negative personality traits are usually masked with a smiley face and a helpful, supportive attitude (always fake of course); because a dog knows it can’t mess with a lion. But, when the lion falls, that’s when its enemy attacks. Every person wants to shine above everyone else. Once in a while, someone shines brighter than them. A mature and confident person can accept this and learn from that person, whereas a lowlife backstabber will grow resentful and most importantly, envious.

Rule of Thumb: A backstabber is consumed by one emotion above all: envy.
You could be better-looking, smarter, and wealthier; you could have more friends or a more interesting life or a better job – maybe you take all the attention away from her. And for the crème de la crème, the man she likes, likes you. There is always something you have that she wants.

How to Identify and Deal with a Backstabbing “Friend”:

·         If she is making fun of your sense of style or your hairstyle or the way you chew gum or laugh, it means she is insecure, sad, and pathetic. In this case, feel sorry for her and return the favor by showing your sympathy to her in front of your common friends. You can then all form a pity parade in her honor and she will end up looking and feeling like that sad soul that she is.

·         On the other hand, if she is trying to ruin your image by spreading dirty, false rumors about you, confront the b****. Under no circumstance should you accept such a person in your life; her existence is merely a nuisance, and you need to put her where she belongs: in the garbage. Give her a piece of your mind in a smart, dignified, and classy way. Of course, being dignified doesn’t mean being naïve, so don’t hold back on being as sarcastic, hurtful, blunt, and mean as possible. Since a backstabber has so many character flaws that are obvious to everyone, call her out on them. It could be her big nose, her fat ass, or that guy she is in love with that tried getting your number several times. It could be that gorgeous pair of shoes you have that she couldn’t afford to buy. There is no limit to how mean you can be or how low you can go. Since a backstabber tries so hard to conceal her insecurities by badmouthing others, she will surprisingly be shocked that you are aware of her insecurities. By calling her out on them, you are giving her the biggest blow to her ego. After that, she is guaranteed to stare at the floor every time you walk past her.

How Can You Avoid Backstabbing Friends?
Choose your friends wisely! Always remember, it’s not the quantity of friends that matters, it’s the quality. Whether they are more or less privileged than you are, make sure they have enough substance, character, and self-confidence not to let it affect them (and vice versa).
Make honesty a priority. If anything bothers you about your friend, confront her on the spot – and vice versa.

How to Identify and Deal With a Backstabbing Coworker:

Backstabbing friends are inevitable. It may hurt at first, but once you remove these peasants from your life, you feel liberated. It’s happened with me three times already in the past year. I don’t even get surprised anymore, I get flattered. If you’ve been backstabbed, you should be flattered too that a person out there was so intimidated by you that she tried so hard to bring you down to her level. While she is the last thing on your mind, you are the main thing on hers. Always remember, the best revenge is continuing to do what pisses people off, regardless of their envious gossip. While you’re dancing for joy, she’s squirming with envy.

“True friends stab you in the front.” Oscar Wilde