Beer: A Taste of Liquid Gold 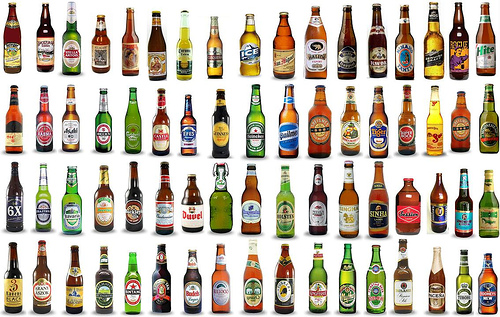 If all beers share these same ingredients what makes each one different?? The beer world is a vast one, there are literally hundreds of types of beers and styles to choose from and new brands keep sprouting up. Basically, I learned the difference of style is found by the amount of malt being used, the type, as well as the amount and method used when adding the hops. The strain of the years used to ferment the beer also applies. Enough of the technical lingo let’s talk Beer!

Ales: An ale yeast is called top fermenting because it gathers at the surface of the crew during the first few days then settles at the bottom. Ales are brewed in warm temperature so the yeast multiplies. Ales are usually higher in alcohol making them fuller and more complex.

Delicious Ale Example: Pale Ale – As in the English Bitters, there are varying styles of pale ales. They all share a pronounced hop flavor and aroma with low to medium maltiness. There is also a good deal of fruity esters. Among the types of pale ales are the English, the India (IPA), and the American. English have a dry character usually due the high sulfate content of the water. The American is usually amber in color and has a bit more maltiness flavor than the other two. When brewing pale ales, fresh, quality hops is a necessity.

Lagers: The lager yeast gathers at the surface then sinks to the bottom. Lager yeasts need cool temperatures for fermentation. Lagers are light in color and taste drier than ales. Lagers are usually found in the U.S. and have less alcohol levels.

Delicious Lager Example: Pilsner – Pilsner style beer originated in Plzen, Czechoslovakia in 1842. It was the very first light colored beer. Today, it is the world’s most popular style of beer. The original Pilsners’ defining elements were the extremely soft water that was pumped locally and the unique aromatic hops that were also grown nearby. Pilsners are malty sweet, and well hopped. Caramel flavors are often noticed accompanied by medium to high bitterness. Pilsners have a good amount of carbonation, they are clean and crisp.

Specialty Beers: Can be either ales or lagers or a mix of the two while adding other ingredients which keeps them from fitting into the traditional ale or lager styles.

Delicious Specialty Beer Example: Fruit/Vegetable Beer – Adding fruit to beer is a relatively new concept in America. However, in Belgium this has been done for centuries. Just about any beer can have fruit extracts or syrups added and they are readily available at homebrew supply shops. With fruit or vegetable beers, there’s no telling what you might find because the different recipes are so varied. 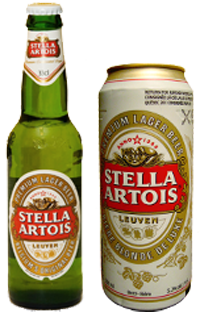 Stella Artois: A sophisticated lager that came from Leuven Belgium. Usually I don’t like beers that come in green bottles as I feel it makes the beer taste stale and bitter but on the contrary Stella Artois is my favorite beer. Heavy, delicious and I would say prestigious. 5.2% Alcohol by volume. 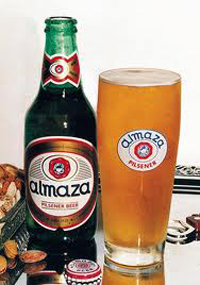 Almaza: Viva Lebanon! Almaza actually ties Stella for my favorite beer. Almaza is known for being the number Lebanese beer and its taste explains it all. There is the Almaza Pilsener, which is my favorite and the Almaza Pure Malt (6% alcohol by volume). Almaza beer also recently launched the Almaza light which is great for a mid day treat. 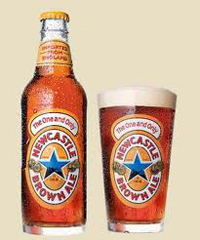 Newcastle: Heavy, dark and delicious. This English Brown ale is produced by Heineken but in my opinion tastes much better. Dark beers tend to be heavy and this one definitely is. I always say you can drink a Newcastle and skip a meal. A perfect beer to enjoy at your local pub. 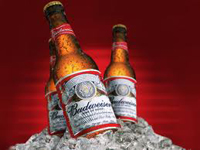 Budweiser/Bud Light: Although known as the King of Beers, Budweiser isn’t the most expensive nor the most prestigious beer around but it is refreshing, tasting and not too heavy. It has a good amont of hops and the perfect fizz which mesh together very well. 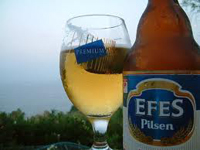 Efes Pilsen: A Turkish delight that is very good when served as a draft. It is smooth yet strong and can be enjoyed anytime day or night. 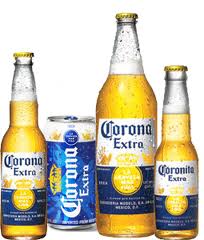 Corona/Corona Light: Perfect for hot summer days at the beach. Just like in their television ads, Corona beer is best served cold and near the sand. Light, golden and deliciously refreshing.

Asahi: Yum! I have gotten very used to drinking Asahi beer while enjoying a sushi dinner. Most Sushi places in the U.S. carry Asahi as it is from Tokyo Japan. It is a dry beer. The best of the Asahi group is Asahi Gold.

961 Beer: Another beer out of our very own Lebanon. 961 puts out a number of beers to choose from including Witbier, Porter, Red Ale and Lager, all equally delicious. The brew master’s select beer is the Lebanese Pale Ale. 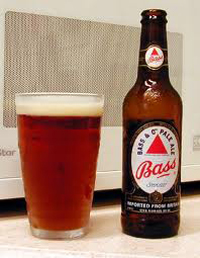 Bass: A Pale Ale founded in England. It was once the highest selling beer in the UK and their distinctive red triangle logo became the UK’s first registered trademark. Perfect for a black and tan (half Bass with half dark beer such as Guinness).

BNL beer drinkers what do you think? What type of beer is your favorite?