La Wlooo!!!…Hallelujah! The Storm Has Come! 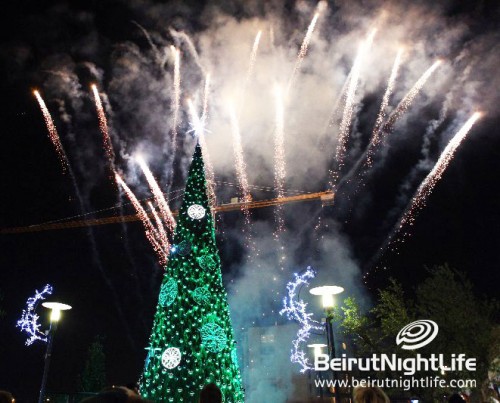 For the past month, almost every Lebanese person has complained at least once that there is no rain Christmas spirit. I have seen people sun tanning by the pool in November (global warming? Nah!) and heard others who made little lame jokes about attending a beach party this New Year’s eve, and most of these thoughts were triggered by the extended summer season that never seemed to end. After we all spent weeks longing for the holiday spirit to arrive, the Christmas lights were finally up on the streets and huge, beautifully lit Christmas trees sprung up in almost every district, planting warmth in people’s hearts.
I, for one, could not wait to go to the malls and observe the colorful, sparkling decoration and lights, but alas, my old and worn out tires did not get me very far. I had promised myself two months ago to get my car serviced before the holiday season, but my laziness got the best of me. Regardless, I decided that no matter what happens in this month of December, I will remain happy, festive, and bright – I also unfortunately decided that my “La Wlooo” will be a happier, more joyful column (for a limited time only of course so that I don’t vomit or kill myself).

I joyfully decided to go to the movie theater with Tiger and Pinkie. Upon entering, we were stopped by a handicapped beggar chewing gum salesman who insisted on making me a customer. Pinkie, who had a prior horrible experience (10 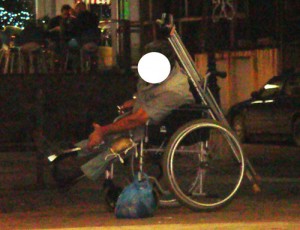 years ago) with this rude, ungrateful scoundrel, decided to seek revenge by giving him a 250 L.L. coin; of course I could not let her do this because I had promised myself to be joyful (not spiteful) this season so I proceeded to (generously) give him a 1000 L.L. bill because it was all the spare change I had. To my astonishment, Mr. Hobo threw the chewing gum in my face and started demanding that I pay him at least an additional 1000 L.L. for it. As I tried to keep my composure, I gently explained to him that I could easily buy the same Chiclets chewing gum from any store for only 250 L.L., but he would not stop shouting at me, jerking my arm, and throwing chewing gum at me. In my state of chewing gum attack shock, I turned into a little “lebanesy” airhead and all I could say was “yii, yii, yii, yii, yii, yii, yii, yii?!?!?” until Tiger and Pinkie pulled me away and scolded me for trying to reason with a crazy thief delusional man. Two hours and a movie later, I couldn’t believe my eyes when I saw the infamous 1000 L.L. bill resting on Tiger’s car, which was the Hobo’s way of telling me “Go f*** yourself!” as he chain smoked his cigarettes and watched us from a distance. Now who would’ve thunk it?!

A couple of days later, still feeling chirpy and warm, I decided to take a short drive down to the Kaslik shopping district to buy my friend a birthday gift while I enjoyed the lights and the overall feeling of Christmas. I had a cup of tea at a nearby café with a couple of friends who implored me to continue shopping by foot because the weather was still dry and cool – so I did just that. I was happy with my thick scarf and t-shirt, feeling that I had made the appropriate choice for the current weather, but as soon as I walked out of the shop, I was drenched with rain and cursing at my girlfriends for urging me to walk. Five minutes later, I was already sneezing in my car when I suddenly realized that I had forgotten my diamond bracelet at the boutique and had to return to claim it – but of course, it was too late (sigh). Well, at least someone stole got a free and beautiful Christmas gift. Getting stuck in hardcore traffic in the midst of a storm, while you’re soaking wet and reminiscing over a stolen bracelet is not the best way to end a day; but it’s still Christmas time and I owe it to myself to remain in the cheery spirit!

I woke up the next day to the sound of thunder and havoc; I felt like I was in the midst of a hurricane but it was only the

famous “4 day storm” that everyone had been looking forward to for days. One thing is for sure, the anticipation of rain is far more exciting that its arrival! Tiger was woken up to a phone call, asking him to move his car because an entire tree had fallen down, barricaded the road, and three more trees were expected to fall within hours (hein?!?!). He then received a second phone call from his panic-stricken friend who informed him that her car had been crushed by a billboard. Pinkie also informed me that her adventurous drive from Beirut to Jounieh was more like an arcade game of trying to escape the flying billboards, trees, and garbage. Of course the roads will remain like a warzone until “the next storm that shall cometh” to clean the mess that was created by this one – what? You don’t actually think that any action will be taken to clear up the mess, do you?
Although companies and billboard owners may fight over who will pay for the costs of the damaged billboards and the advertisements, I hope they see the bigger picture and learn that these so-called advertising mediums are in fact dangerous and in excess. 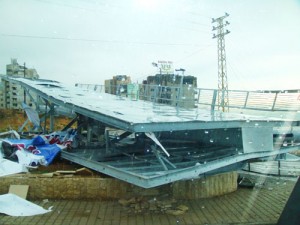 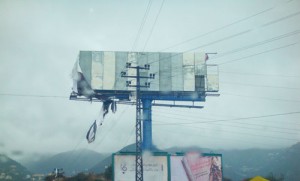 Speed radars must have been going crazy all weekend with the wind at 90 kmph (faster than the speed limits in most zones) while flights to Lebanon were cancelled as our relatives wait a couple more days to join us in the festive hustle and bustle of the Christmas season! Although the beautiful and luminous Christmas decorations were pulled away by the monstrous wind as Christmas trees sadly flew across Lebanese skies, I hope that the thousands of dollars spent on those decorations will be spent once more on lights and trees that will actually remain intact. I am strangely still thankful for the blessing of rain after those months of excessive heat that almost turned our Mediterranean climate into a Saharan one; and I know for a fact that our relatives, tourists, and Christmas lights will all be on Lebanese streets this time next week because despite all, there’s no better place to celebrate. 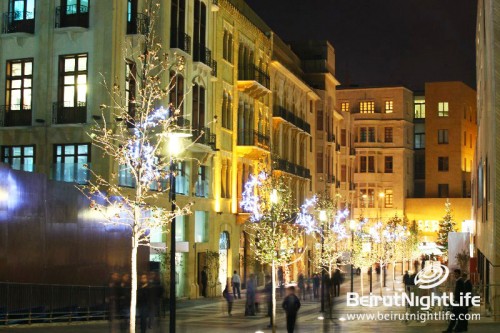 I can’t wait for all the holiday traffic on our humble Lebanese highway, I can’t wait for the heavy crowds at the malls while people rush to buy last minute gifts for their loved ones, and I can’t wait to get pushed and shoved in the heavily packed streets of Gemmayze while I listen to people drunkenly laughing and tourists speaking in strange languages, and watch people (like myself) trying to rush into a bar before it gets too crammed to breathe; and although we might all complain, we’ll all miss it after the festive month is over, because although we may all want to kill ourselves amid the chaos, there is no other time we feel more alive (or thankful for being alive)!

Enjoy this festive season and share the joy . . . starting now!

Ps. no matter who or what tries to piss you off, “remember it takes 42 muscles to frown, but only four to extend your middle finger and say ‘bite me’. ”