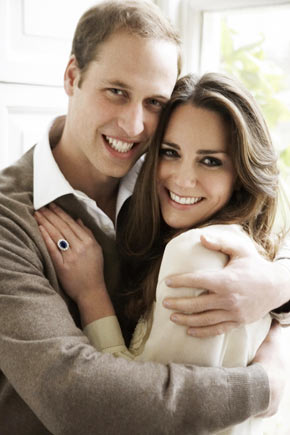 “I am very happy to have been asked to cover this historic moment that the whole world was waiting for. They are in their prime and brimming with happiness,” says Testino, the same photographer who took iconic pictures of Princess Diana shortly before her 1997 death. “I have never felt so much joy as when I see them together.”

In the couple’s official portraits taken Nov. 25 in St. James’s Palace, London, Kate — who will now be known as Catherine — puts her 18-carat sparkler on display. The platinum ring, which features an oval blue sapphire surrounded by 14 smaller white diamonds, is the same engagement ring that belonged to William’s late mother.

The pair’s April 29, 2011 nuptials should be the biggest royal event since Prince Charles married Diana in 1981.