La Wlooo!!!…A Building Collapses, Then a Bridge? Then a Country? 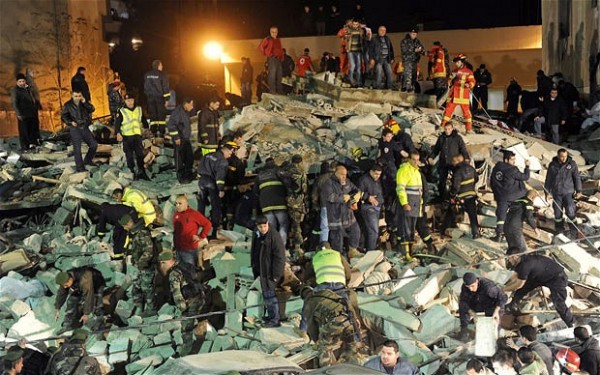 Disclaimer: The following content reflects my views and my views alone. It in no way represents the opinions of BeirutNightLife.com or any of its affiliates.

Just as I was beginning to love and enjoy Lebanon (on a superficial level alone, of course), I was struck back to reality with the collapse . . . of a building. To those of you who are unaware of what happened this past Sunday, a very old five-turned-six storey residential building in the Asharafieh neighborhood of Fassouh collapsed, resulting in the death of 27 people with 12 wounded survivors and possibly 4 to 9 left missing. Reports later on “confirmed” that there were 2 left missing, but later on claimed that there were no missing bodies left in the debris. Right. Let us dissect this matter even further. A reliable source of mine, who was present in one of the Ashrafieh hospitals that took in these victims, informed me that one of the wounded tenants mentioned that a pillar and a balcony had previously fallen right off this ancient building due to nearby construction works that must have shaken this dinosaur’s foundation.

Am I the only one that finds this absolutely ridiculous?

So, hypothetically speaking, let’s say you’re living in a building that literally crumbles for weeks, at what point exactly would it dawn on you that there is a serious problem? When it collapses? How did the tenants stay so calm and collected about this for weeks? Where is the municipality that was supposed to take action? Where is the GOVERNMENT that is supposed to demolish such old buildings that are a hazard to their tenants and surroundings? When will the Tenancy Law (issued in 1960) be modified in such a way that the money provided to building owners will be enough for maintenance fees?

In the case of this building, all the tenants were of very low income, so they expected to live in such poor conditions. They wouldn’t know any better. For a couple hundred bucks per month, they were all grateful to have a roof over their heads. As a matter of fact, they went on to construct yet another floor on this five-storey building, making it six storeys high. Wow. I will gladly blame the government for this unacceptable neglect. Where are the laws?!

Fact: According to MP Mohammad Kabbani, there are 20,000 other buildings around the country that are at risk of collapsing.

To further discuss this disgusting incident, with 4 to 9 tenants left missing (as reported by the Red Cross at 9 pm yesterday), why did the search stop? A photo was taken yesterday by Gino Raidy from Gino’s Blog, showing how bare the once-hectic site of the incident has become . . . after only 24 hours of the collapse. Is this the degree of apathy that our country has reached to? 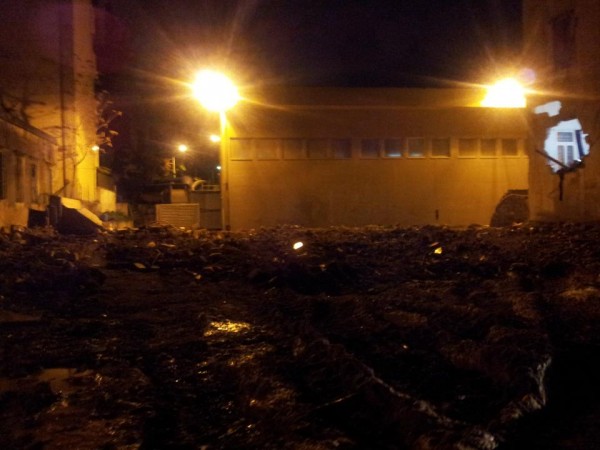 One “reasonable” explanation to this could be the following excerpt from Najib on blogbaladi.com:

“I overheard some people express their relief that a large number of residents were non-Lebanese in the building that collapsed. In fact, 10 Egyptians, 9 Sudanese and 2 Jordanians were reportedly living in that building.

When are we going to get rid of those sick mentalities?”

Now that’s the spirit! Welcome to “How to Be a Racist Peasant 101.” It’s 2012 and we still have people thinking this way. So, if they’re not Lebanese, they are not entitled to live. They are mere workers who clean our floors. They are our slaves. Who will care if they’re gone anyway, right? No they don’t have family in their countries that haven’t seen them in years – who depend on them for financial support.

So, what happened to the casualties? Each received a compensation of 20,000 USD. This is shameful; when a person’s life is worth less than a car.

Of course, the ignorant Lebanese society looked at the building’s collapse as a sign of warning and started asking questions, “Hmmm . . . I wonder if anything else might collapse.”

There have been discussions for the past few years that the Jal el Dib Bridge should be taken down because it has literally expired. For those of you who don’t know what bridge I’m referring to, it’s the one made of steel – because there’s literally no asphalt left. It’s the one on which you feel you’re having an epileptic seizure because (once again) there’s literally no asphalt left and you can feel every bolt, screw and nut used to construct this prehistoric bridge. Ironically enough, Edward Abou Jaoude, Chief of the Jal el Dib Municipality, denied rumors that the Jal el Dib Bridge will collapse.

Now, for the one million dollar question, why hasn’t this hazardous bridge been taken down yet? Because of disputes between various political parties and problems with the Jal el Dib Municipality OF COURSE! Why bother asking? The answer is always the same anyway! When oh when might they reach an agreement? I’ll go out on a limb here and say, when the bridge collapses and each casualty would be compensated with 20,000 USD. Amen. (Click here for full report) 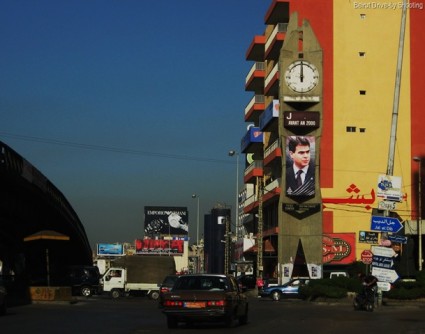 To make matters worse, any of you who were in Beirut during the past two weeks must have noticed how the Charles Helou Highway was closed down for repairs. This resulted in insane traffic for a few days and nights as it rained, rained and rained. Why was it closed down? Because the Charles Helou Bridge has a risk of collapsing as well. A huge pot hole in the asphalt presented a hazard to the bridge’s “sturdy” foundation, which is slowly deteriorating due to the poor weather conditions. One may assume that during the days that it was closed down, some maintenance was done . . . but no. 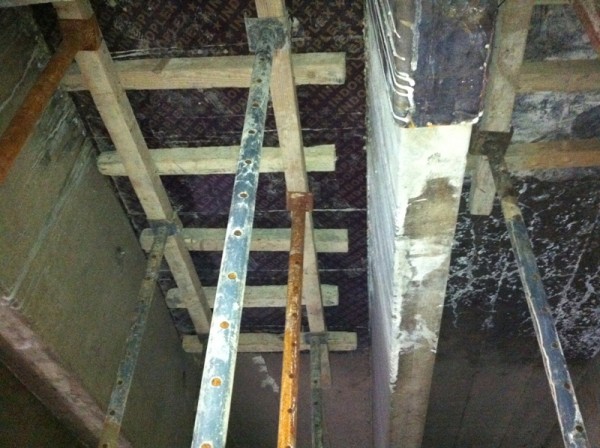 The "Sturdy" Wooden Foundation of the Charles Helou Bridge

For the cherry on top, after days of closing down the Charles Helou Bridge in order to cover up that pot hole with asphalt, the road is once again open . . . and the pot hole is still there – bigger than ever! So, what in heaven’s name happened there during the days they were supposed to be covering up that godforsaken hole? Apparently, the rain (the awful Hurricane Katrina) didn’t allow the maintenance team to finish their job, so they are waiting for the rain to stop. Assuming that’s true, why is the road open again?! I guess a roadblock, a detour and some traffic are much more unacceptable that a bridge collapsing, injuring and killing a few people. Once again, the Lebanese logic leaves me awestricken! (Click here for full report) 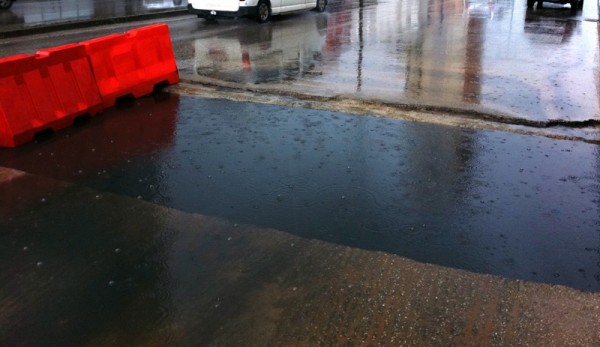 Seriously now, a few days of rain doesn’t qualify for a hurricane emergency. Nations have survived drastic hurricanes; how is it that we can’t get through a few days of mediocre rain without witnessing the entire country crumble?!

I’d like to end this with a message to the Lebanese government:

Assuming that you do know how to read, please pay attention to the following:
There are other countries in the world that could much better use your help; or better yet, tribes in the jungles of central Africa where you would feel right at home. You see, over there you have no laws to worry about. You can live happily like the peasants that you are. You wouldn’t have to worry about fixing roads, bridges or buildings since there are none. You would find yourselves happily communicating with wild animals, which you could definitely learn a thing or two from; like caring for your own species, living together in harmony, and the laws of hierarchy – basic things – all of which have been mastered, by animals, in the wild, yet seem so difficult to apply in Lebanon. 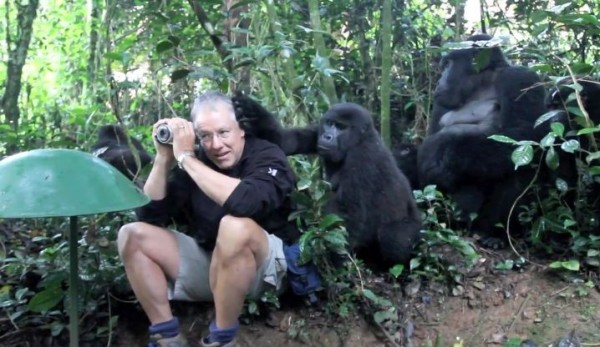 Back to how I started, just as I was beginning to love and enjoy Lebanon . . . for its beautiful new venues and developments that are reminiscent of the more civilized cities I’ve visited in the past years . . . I was struck back to reality as I remembered that a country’s beauty cannot possibly just be based on aesthetics when its core is rotten. Before we go on “developing” what could have once been a thriving nation, let’s focus on fixing its deteriorating, neglected infrastructure before all these projects collapse one after the other. Let’s start from the bottom and work our way up, the right way; instead of always finding shortcuts, the “a la Libanaise” way.

“The number one problem in our country is apathy, but who cares!”