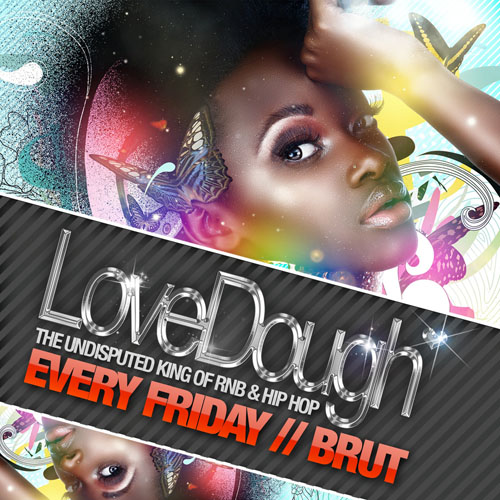 You know what time it is??
It’s LoveDough time again this Friday April 30th!
This week we’re flying in a new DJ from the UK, Jason Fakeerah!
Jason Fakeerah is one of the most respected DJs of the Urban club scene in the UK and has been cutting his teeth on various styles, from RnB & Hip Hop to UK Funky and Old Skool Gara…ge for the last ten years. He has worked alongside ALL of the major players in the UK, such as, Radio 1’s Trevor Nelson, Tim Westwood, Dreem Teem, Shortee Blitz, Steve Sutherland, plus artists: Wiley, Dizzee Rascal, Kano, Mis-Teeq, Ms Dynamite, Damage, Donaeo, Crazy Cousinz, Tinie Tempah, Shola Ama & Faith SFX and supported US superstars Xzibit, T.Pain, Jazzy Jeff, Mario and 112. In fact on one occasion after impressing none other than the legend that is Reverend Run (RUN DMC/Run’s house) with his skills, the RUN DMC front man jumped on the mic mid set!!
Jason is a also a member of the Atlantic/Warner Records Group which has allowed him to offer his accomplished DJ support to the likes of Jay Z, Sean Paul, Lupe Fiasco, T.I., Missy Elliot, Cassie, Estelle, Gym Class Heros and Craig David.
In 2009, Jason won the acclaimed ‘BEST URBAN CLUB DJ’ Award at the LBA’s and Won the ‘BEST DJ’ award in the Leeds Bar & Club Awards 2007/08.
Get yourselves down to Brut monot on Friday April 30th for the best wave of Hip Hop & RnB in town with DJ Jason Fakeerah!!
The cool, thrilling and exhilarating series of LoveDough are not to be missed!!