La Wlooo!!!…How to be a Sexy Lebanese Gym Beast 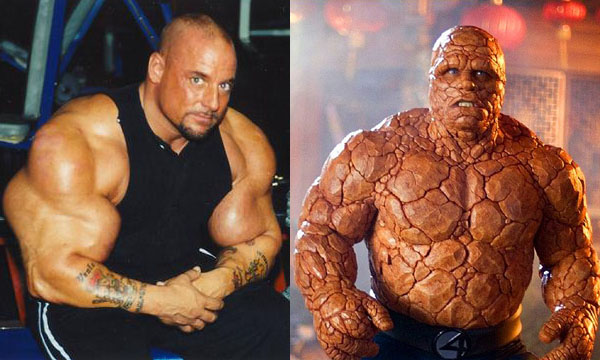 The Gym 'Thing' vs. The Fantastic Four 'Thing'

After leading a sedentary lifestyle for almost a year, I decided to hit the gym again. Although certain body parts of mine may have forgotten what it felt like to work out, my brain certainly didn’t forget how much I detested my last two wazwaz-infested gyms. Their odors, stares and mannerisms ruined my mood and my workout. I even fought with a zouzou once, who dared to drink right out of my water bottle and denied it when I caught him red-handed. After that incident, I was traumatized and decided to pick my next gym very wisely to avoid retards who finger other people’s belongings (bottles) because they’re too cheap to buy stuff (bottles) of their own. After updating my gym wardrobe and gear, I picked the perfect gym for me in terms of price, location, equipment, and (lack of) wazawiz. I made sure to check every single machine and inspect them for sweat residue and/or lingering onion-like odors. I was very pleased with the results – and thus began my gym adventures in planet Lebanon.

Despite my thorough inspection around the gym, there are apparently certain things one cannot avoid – no matter what gym they go to. It’s as though there’s a manual out there on “How to be a Gym Beast”. Assuming such a manual should exist, I’d say it would go a little like this:

Step #1: You must attack the gym every day for a couple of hours, focusing on one or two of your muscles. For example, your breasts and biceps – make sure your breasts are so big, to the extent that walking topless at the beach becomes offensive for anyone watching you. To make people even more uncomfortable, you should rub Vaseline or oil all over your chest and flex your pecs every few seconds. People may vomit, not because they’re disgusted, but because you’re a sexy panty-dropping beast.
After you’ve secured a pair of watermelons bigger than the radius of your head, congratulate yourself on completing the first 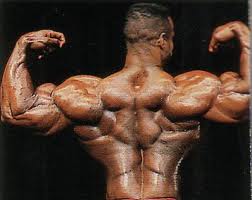 step of becoming inhuman. This is not enough. Your biceps should be large to the extent that your arms remain in a horizontal position at all times. The final result should seem as though you inserted your girlfriend’s D-cup breast implants into your arms, or like a giant bumblebee bit you . . . twice.
Moving on to your waistline, please make sure to have a V-shaped waist. While your upper-half may not fit through the door, your bottom half should be tiny. Make sure your girlfriend’s jeans are big on you, and continuously brag to her about how you’re two waist sizes smaller than she is. That ought to get you laid on the spot, you masculine man you! Of course, with all the sh** you’re injecting into your system; your wiener should be tiny too. That doesn’t matter though, simply inject some more chemicals into your system, like bull Viagra, and you should be able to pleasure your woman all night long. For bonus points, lift her with one bicep and allow her to bounce off your flexing pectorals for a few minutes. It’s every woman’s dream – isn’t that why you’re so pumped up after all?

Step #2: There’s no point in looking like a beast if you’re not going to smell and act like one. Make sure you exude an aroma of onions that lingers around you constantly the minute you lift a dumbbell. Yummy!
You should look and smell sweaty from the minute you walk into the gym till way after you walk out. This has nothing to do with your intense training; it’s because of all those fat burners you’ve been taking. If you notice the cleaning lady shadowing you while frantically spraying air freshener and wiping every surface you touch, you know you’re on the right track to 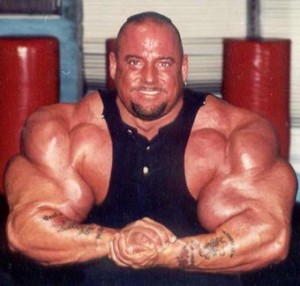 becoming a man-beast.
Walk like an ape; arms out, chest out. Frown, grunt, and always look like you’re about to release some gas. Notice how fellow gym-goers will dart out of your way as you approach them. It’s not because you’re stinky and filthy, it’s because they feel shamed by your godly presence. Keep grunting. Make sure it sounds like a cross between a wild boar and a gorilla. Imagine Pumba and King Kong fornicating and giving birth to a sexy beast. It would be you.
As you lift your weights, release sexual sounds, reminiscent of a beastly orgasm. To ensure this, if you can only lift 80 KGs, try lifting 180 instead. As your testicles explode, let out long, loud, obnoxious, agonized, tortured, sexual moans. Don’t forget to grunt simultaneously. Some man-beasts allow themselves to fart during this strenuous process. If that happens to you, notice that any girl around you will be looking at you with her mating call face (it’s a facial expression of horror and disgust).
Remember to sound like Tarzan every time you lift a kilo. It’s not annoying, distracting or unnecessary at all, especially if you keep doing it for 10 minutes nonstop. It’s very sexual. That way, the three mortified women in the corner can get a glimpse of what you’ll sound like when you’re suffocating them in bed.

Step #3: Despite your intense training, always allow for a 30-minute gap between each workout during which you can hit on chicks at the gym. The gym is a place to harass, irritate and pick up chicks. The machines are there just for show — instead of 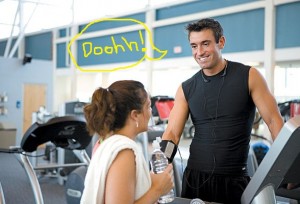 chairs and tables. If the gym were really a place for working out, you wouldn’t need to inject yourself with all those muscle-pumping chemicals. Instead, you’d actually lift a weight or two and perhaps work out a little. But, shrinking your wiener and turning into Shrek is a small price to pay if you want to waste hours of your life hitting on sexy gym girls, who look even better than they do at weddings. One way to do this is by constantly harassing her while she’s trying to work out by telling her how to properly do an exercise. It doesn’t matter that you don’t have a clue as to what you’re teaching her or that you have the wit, brains, and conversational skills of a 4 year old with Down syndrome, what matters is that she’s swooning over the intense odor of your armpits. Explain to her what exercises she needs to lift her gluteus maximus and enjoy as she pops her butt out for you to analyze it. At this very moment, you’ll know that Tarzan has met his Jane; Shrek has met his Fiona; King Kong has met his Ann . . . (grunt with delight)

The Only Step: Looking the part is crucial when going to the gym. Make sure you buy the tightest clothes so that a) breasts are popping out, and b) camel toe is exposed (a.k.a. frontal wedgie). Your hair must be perfectly coiffed. Do not pull it back from your face. Why should you? It’s not like you’re going to sweat or anything. Make sure to apply a light foundation, blush, 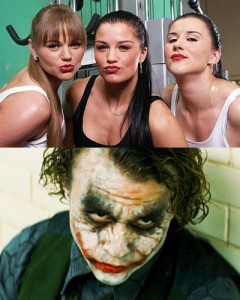 mascara, brow pencil, eye liner and shiny lip gloss for a natural look. Don’t worry about smudging your make up on your towel or looking like The Joker from Batman – you’re not going to sweat! Wear your most expensive watch, diamond earrings, bracelets, necklace(s), and any other item that insinuates you’re wealthy and unquestionably retarded.
Rule of thumb: Getting ready for a wedding and getting ready for the gym should require the same amount of time and effort.
Forget about headbands, towels and hair ties – the only two accessories you need are your phone and iPod. You will need these for those boring intervals of fake workouts, until you secure eye contact with one of the apes. To achieve this, make sure you look as dumb as possible, smiling and batting your lashes at every man-thing that grunts. While you’re on the treadmill, set the speed level to 2 or 3 max. Make sure that if you were walking any slower, you’d be walking backwards. To entertain yourself, watch some TV, listen to some music, or call up some of your clever friends for some intelligent conversation. You’ll know you’re doing it right when the girl next to you looks like she’s going to beat the b**** out of you. Don’t mind her; she’s not irritated by how stupid you are, she’s just jealous of your glorious, ‘unsweaty’ presence.
Chew gum at all times, with your mouth wide open because you’re so classy (hair, jewelry, makeup . . . La Classe) and because you never know when a guy might come and chat you up. If there are no available men, flirt with your trainer. Who cares if he looks like The Thing from The Fantastic Four. He’s giving your insecure character all the attention it needs.

Don’t pay any attention to losers like me who go to the gym strictly to work out and maintain a healthy lifestyle, while looking like a boring male coconut in gym attire, huffing and puffing to burn those calories – while enjoying it. Who does that?
And please pay no attention to haters like me who get irritated when dolled up b****es hog a machine for half an hour as they’re playing angry birds on their iPhone, or when ape-like creatures try chatting up antisocial girls like me to correct their workouts.
(No chimp, I correct your workouts — and I don’t want to know you.)
Long live physical hygiene!