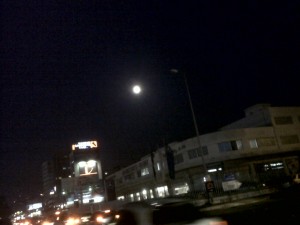 Lebanese and elsewhere in the world people observed what astrologer Richard Nolle called a “supermoon” — a new or full moon that appears brighter, fuller and closer than usual — tonight.

Supermoons occur every time a perigee — the point of the moon’s orbit at which it is closest to the Earth — and a syzygy (a full or new moon) are aligned, according to NASA. During some “supermoons,” however, the two do not perfectly coincide but come very close to each other.

Some believe that there is a link between supermoons and natural disasters. For example, it has been speculated that the March 11 Touhoku earthquake and tsunami in Japan was connected to the supermoon. There is, however, no conclusive evidence to link supermoons to any natural disasters, according to Discover Magazine.