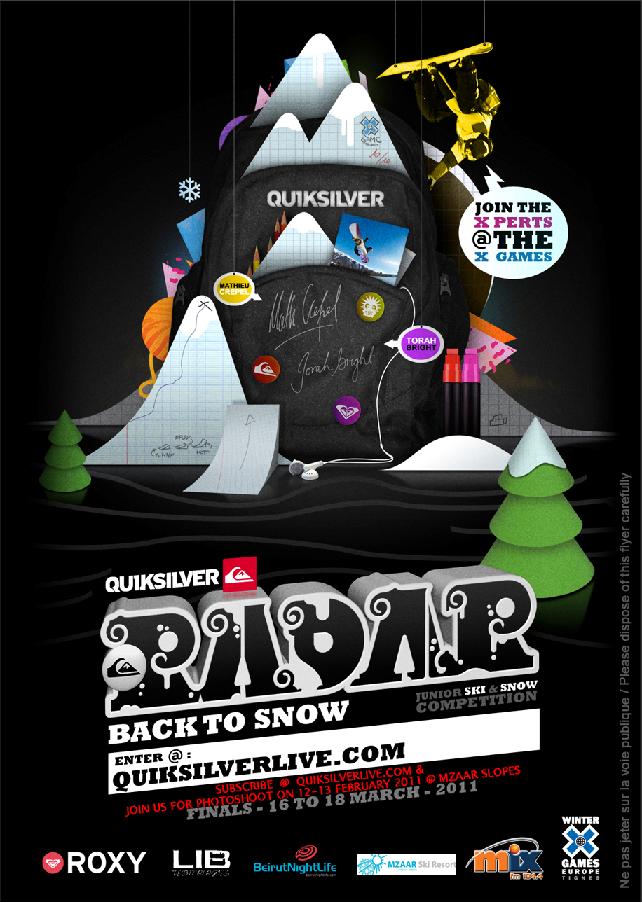 To unearth these future champions, Quiksilver and Roxy have set up a wide contest open to all young riders between 8 and 14 years of age. It is open to both girls and boys, who snowboard or ski freestyle.

The goal? To bring the young new talents into the prestigious Quiksilver team, with a renewable one-year contract. The finalists will also win VIP access to the Winter X Games Europe. Held in Tignes, this is the ultimate event of freestyle skiing and snowboarding. They also win an invitation to a summer training camp.

The rookies motivated by this challenge will have to go through three stages of selection:

Around 150 of the riders will be chosen on the basis of their uploaded files, photos, videos of their best tricks and a short biography, which must all be uploaded to www.quiksilverlive.com. Registrations will close on the 3rd week of January.

15 European stations are accommodating our ‘Happy Riding Day’ rounds at which the 150 pre-selected candidates will participate. During the Happy Riding Day, the kids must impress the judges and the godfathers of their sport with their tricks but also with their personality. Each one will feature in a video, which will be submitted to an internet vote and also to the stars of Team Quiksilver and Roxy. Three of them will be selected by spectators and fifteen by the Quiksilver pros.

The final of the Quiksilver & Roxy Radar will run alongside the Winter X Games Europe (16-18 March) in Tignes.

The 18 finalists will fight it out at an ultimate jam session under the watchful eyes of Mathieu Crépel, double Snowboard World Champion and Torah Bright, Olympic Snowboard Champion, among other high profile riders.

All will be invited to be VIP guests of Quiksilver and Roxy during the Winter X Games Europe along with their chosen coach but only the winning Super finalists will receive their trophy from the hands of their idols, and the dream prize of one year’s sponsorship from Team Quiksilver or Roxy, and participation at a summer camp.