A new form of urban art is popping up in cities throughout the world. Urban Projection Mapping, as it is loosely known, is the art of creating video displays that make buildings come alive in light, color and motion. Armed with powerful technology, a handful of enterprising video artists create vivid, visually arresting video displays that are projected on urban architecture. These videos tell stories, form abstract imagery and in some cases, sell products.

Apply before November 1st become a finalist on November 5th get $300 as an incentive attend workshops by international experts in 3D mapping watch the light, sound and visual performances december 23rd to 31st, 2010 project your animation on a facade building in martyrs’ square vote for the best animation win 4000$… 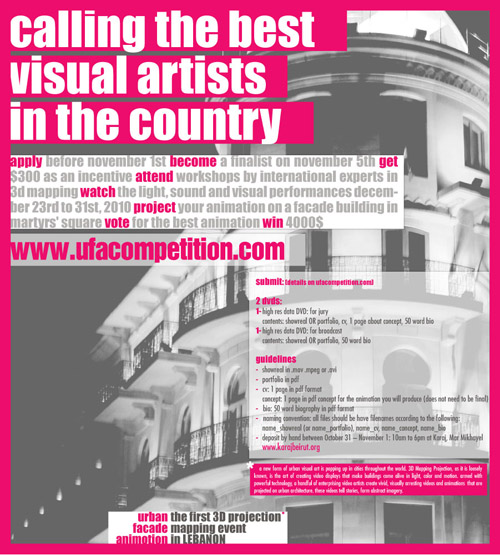 Time Scale
the 3D mapping event will take place during the last weeks of December which usually sees a convergence of religious holidays.

Location
Place des Martyrs – previously Place des Canons was the centre of pre-war Downtown Beirut coated by all the most prestigious building of the time.

Topics and Spirit
The script has been written to expose historic continuity and celebrate patriotic values of Lebanon.