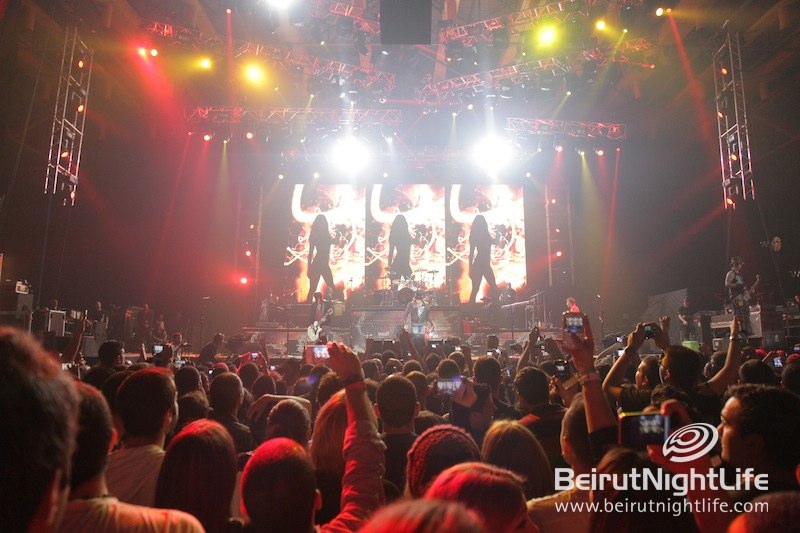 JK58 presented, in partnership with NRJ and MTV Lebanon, true legends of rock Guns N’ Roses in a massive concert in Lebanon at the Forum De Beyrouth on Saturday March 30. For those that couldn’t attend, we’re sorry to say you missed something historic and extraordinary! The concert was of epic proportions and gave the audience exactly what they were looking for – a real rock concert by the band that has been setting a flawless example for rock stars everywhere for almost 30 years.

Before the legends took to the stage, two opening acts from Lebanon wowed audiences with their talent. The Wanton Bishops opened the event with three of their original hit songs including “Smith and Wesson”, “Oh Wee” and “Sleep with the Lights On” as well as a cover. Shortly afterwards Near Surface took over the stage for an awesome and energetic performance of their hits, including the widely popular “Now You’re Here”. 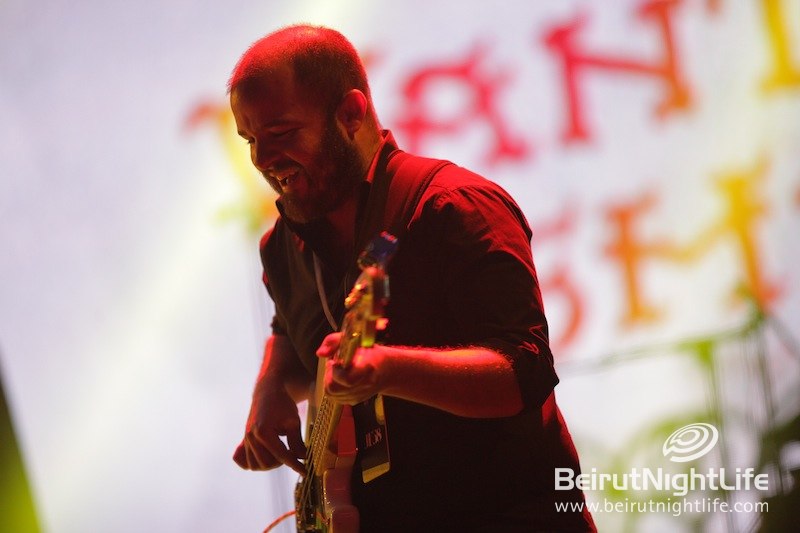 After these were over, and as technicians began to bring on the Guns N’ Roses instruments, screams of unsurpassed excitement anticipation could be heard from the audience who could hardly contain themselves! These sounds of excitement could be heard through the sound check and as the instruments were tested.

And then the moment finally arrived when, one by one, the band members of the one and only Guns N’ Roses started popping up on stage, one by one – Axel Rose being the last. In his trademark cowboy hat, the one original member still left in the band appeared and began to belt out song after song in his characteristic shrill voice, only matched by the thrilled shouts of the crowd. Almost 30 years with the band, and Axl Rose has definitely still got it, with infinite amounts of energy and a voice that still has the same power and emotion as ever. 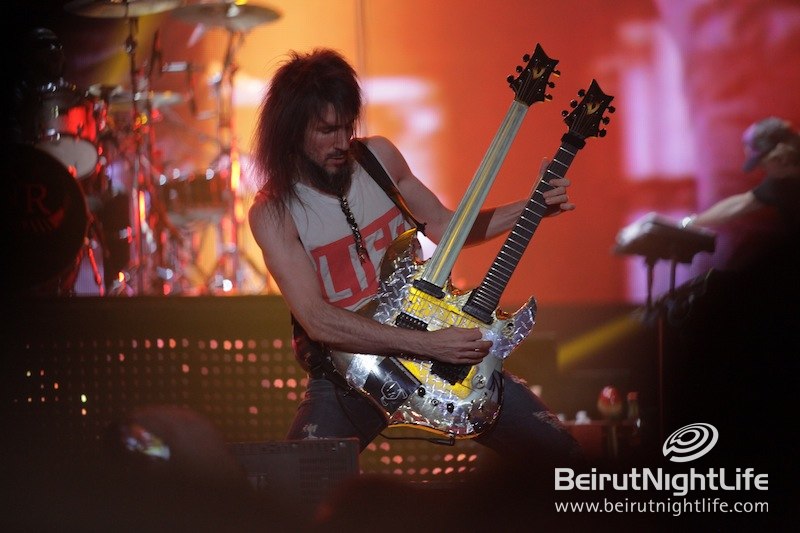 In his ripped jeans, sunglasses and leather jacket, Axl jumped around the stage and threw the mic stand around in true rock star style while singing epic GNR hits like Welcome to the Jungle, Live and Let Die, Better, Sweet Child of Mine, November Rain, Don’t Cry, Knocking on Heaven’s Door, and Paradise City. Fans really got an amazing and rich experience, with the band singing almost 30 songs during their 3 hours on stage.

During the concert Axl Rose stopped to introduce the other members of the band, at which point huge cheers came from the audience for each of the members, who included keyboardist Dizzy Reed, lead guitarists DJ Ashba and Ron “Bumblefoot” Thal, lead and rhythm guitarist Richard Fortus, bassist Tommy Stinson, drummer Frank Ferrer and keyboardist Chris Pitman.

The guitar players and bassists also maneuvered all over the stage, climbing on various parts of the set while playing, especially during their impressive solos during and in between songs, and even shaking hands with some of the spectators in the front rows. Their interaction with the crowd was really incredible and the band’s energy became one with that of the listeners. 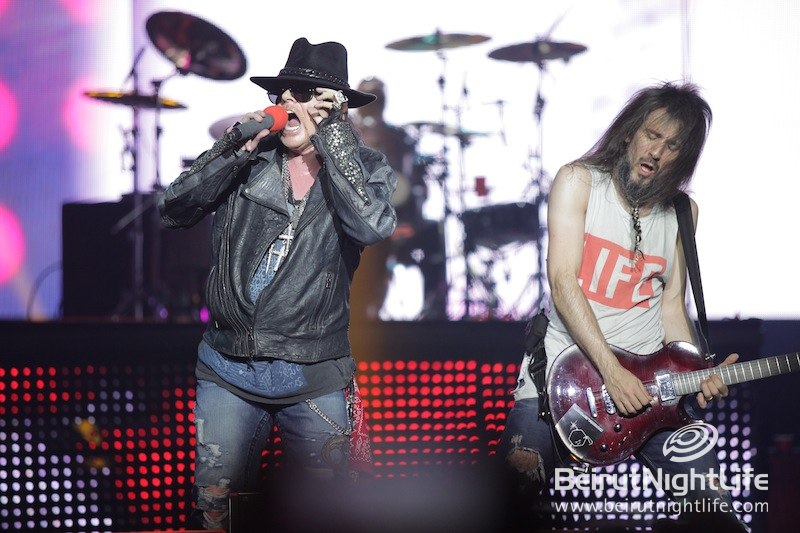 Visually, the concert was stunning too. The graphics on the LED screens in the background featured amazing images that ranged from dolphins, Chinese symbols, explosions, roses and of course, hot women. Laser beams and great lighting beamed up through the venue and created an atmosphere perfect for a rock concert.

The diverse crowd included people of all ages, from the young who had always heard about the legends and wanted to see them in person, to the older crowd who grew up with GNR hits as the soundtrack to their young lives and wanted to relive those moments. Wide-ranging people with all kinds of fashion choices and hair styles could be seen, all coming together to celebrate the music of one of the greatest bands of the last few decades. Everyone collectively went wild when they heard their favorite songs being played, with many in the crowd jumping, head banging, dancing and just enjoying some of the best ever rock music. 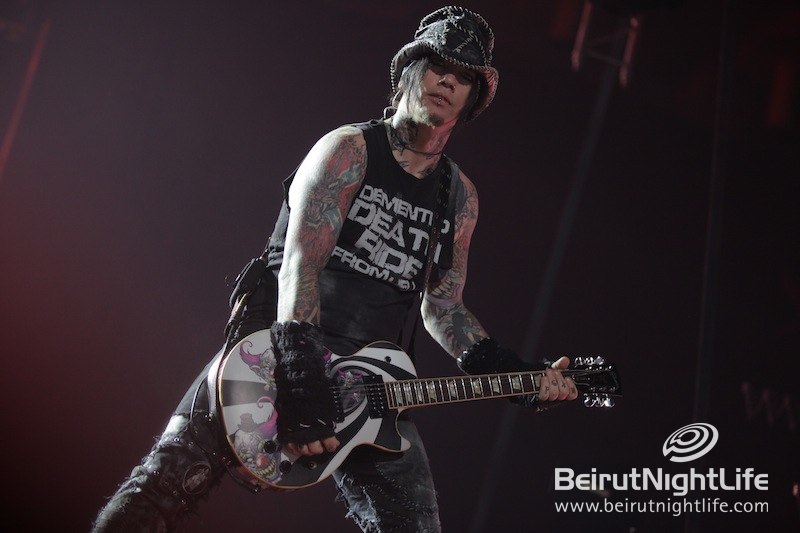 Axl got the audience to do some of the singing too, not only encouraging them to sing along to popular records (not that they needed any encouragement) but also when he announced that it was drummer Frank Ferrer’s birthday and had everyone in the venue sing happy birthday to Frank.

The crowd got a sweet and unexpected surprise when Guns N’ Roses covered Pink Floyd’s Another Brick in the Wall, with Axl on the Piano. This musical wonder went strait into GNR megahit November Rain, and the audience could hardly handle their excitement for such a combination. After this the band paused their tunes for a few moments and played a rock version of the Lebanese National Anthem before sending the crowd into a frenzie with Don’t Cry. Many held up their hands and did a wave to the slow and beautiful melody. 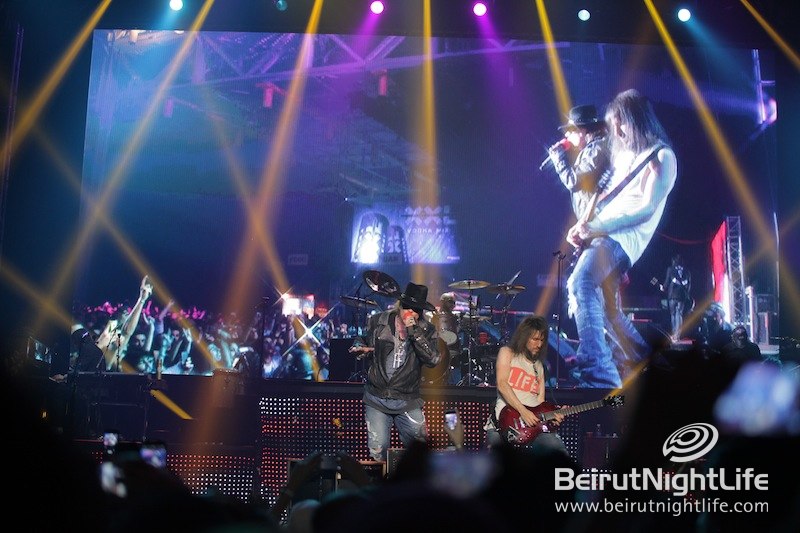 Just when we thought the concert ended, the band came back out to perform some more for the audience who just couldn’t get enough. The last song was possibly the greatest and most energetic performances of all, Paradise City. It all ended with a bang when a gigantic cloud of red confetti and smoke was thrown into the air, covering the venue in an amazing red glow. The legendary and incredibly talented Guns N’ Roses took a bow, guitar picks were thrown into the audience,  and Axel thanked everyone from coming out, wished Lebanon a Happy Easter and told them to stay away from the “popo”.

What an amazing night spent with talents that can never be equaled. We the Beirutnightlife.com team had the time of our lives making history with Guns N’ Roses and the real rock fans of the country. We hope you did too!