The World’s Largest Serving of Hommos

“Come and fight for your bite, you know you’re right!” was the slogan for the event — part of a simmering war over regional cuisine between Lebanon and Israel, which have had tense political relations for decades. 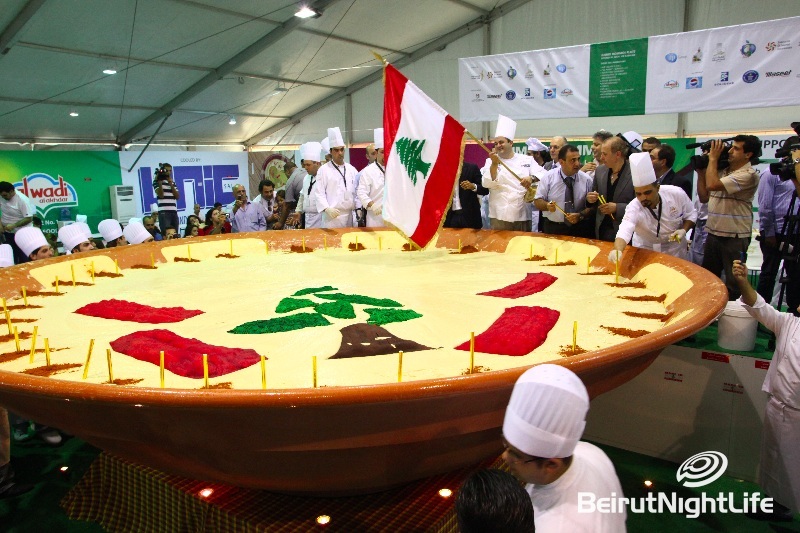 “Lebanon is trying to win a battle against Israel by registering this new Guinness World Record and telling the whole world that hummus is a Lebanese product, its part of our traditions,” said Fady Jreissati, vice president of operations at International Fairs and Promotions group, the event’s organizer.

Hummus — made from mashed chickpeas, sesame paste, olive oil, lemon juice, salt and garlic — has been eaten in the Middle East for centuries. Its exact origin is unknown, though it’s generally seen as an Arab dish.
But it is also immensely popular in Israel — served in everyday meals and at many restaurants — and its popularity is growing around the globe.

The issue of food copyright was raised last year by the head of Lebanon’s Association of Lebanese Industrialists, Fadi Abboud, when he announced plans to sue Israel to stop it from marketing hummus and other regional dishes as Israeli.

But to do that, Lebanon must formally register the product as Lebanese. The association is still in the process of collecting documents and proof supporting its claim for that purpose.
Lebanese industrialists cite, as an example, the lawsuit over feta cheese in which a European Union court ruled in 2002 the cheese must be made with Greek sheep and goats milk to bear the name feta. That ruling is only valid for products sold in the EU.

erve to remind the world that hummus is not Israeli.

“If we don’t tell Israel that enough is enough, and we don’t remind the world that it’s not true that hummus is an Israeli traditional dish, they (Israelis) will keep on marketing it as their own,” he said Saturday.
Some 300 chefs were involved in preparing Saturday’s massive ceramic plate of hummus in a huge tent set up in downtown Beirut. The white-uniformed chefs used 2,976 pounds (1,350 kilograms) of mashed chickpeas, 106 gallons (400 liters) of lemon juice and 57 pounds (26 kilograms) of salt to make the dish, weighing 4,532 pounds (2,056 kilograms).

It was not clear what the former Israeli record was, and organizers gave conflicting reports on when it was made.

But chefs and visitors broke into cheers and applause when a representative from the Guinness Book of World Records presented Abboud with a certificate verifying Lebanon had broken the previous record. The plate was then decorated with the red, green and white Lebanese flag.