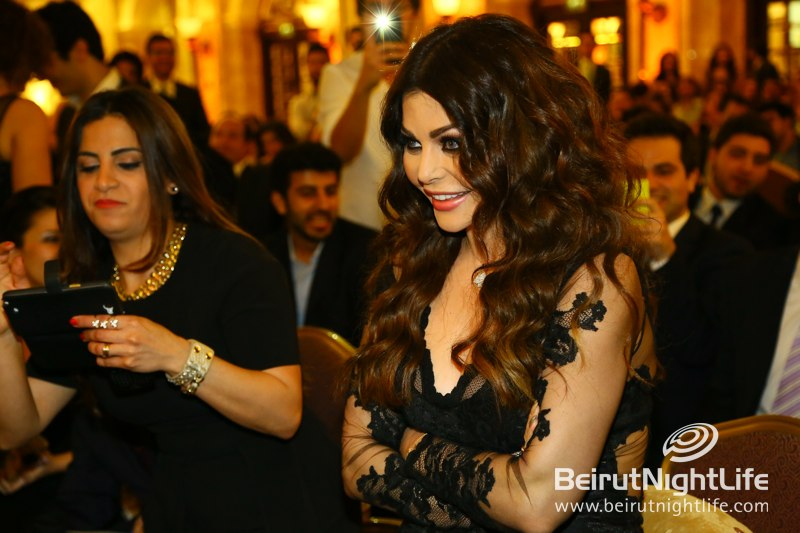 During a grand evening hosted by Lebanese television personality, Pierrette Katrib, at Phoenicia Hotel, the Online Collaborative revealed who the Lebanese online community considers to be most engaging among celebrities, diplomats, bloggers, tweeps and brands across 33 categories.

The award ceremony was attended by H.E. Tom Fletcher, British Ambassador to Lebanon and H.E. Alistair Burt, British Minister to the Middle East as well as Minister Ziad Baroud. Celebrity Haifa Wehbi surprised her followers on social media by attending the event.

This awards ceremony came as a culmination of the three preceding phases of the Social Media Awards – Online Nominations, Judging Panel Finalists Selection and Voting Phase, whereby the final decision was based 50 percent on the online community’s vote and 50 percent on the vote of the panel judges. Following over 100,000 votes by the online community over a period of a month and intense and creative campaigning by all finalists the award winners were revealed in a surprise-filled evening accompanied by performances from Lebanon’s most socially active performing artists, Poly, Adonis and Hiba Kadri.

“When we decided to undertake the challenge of this large-scale event, our aim was to empower the users of social media in Lebanon.” said Mohammad Hijazi, Chief Collaborator and Founder of the Online Collaborative. “Online Collaborative, in general, aims to promote the proper use of technology and social media to Lebanese society through courses, workshops seminars, conferences another events. Through the SMAs we wanted to promote the users of social media who are investing their time and energy on meaningful content across different social media channels and shed light on their achievements to ‘offline’ society.”

The halls were filled with over 600 bloggers, journalists, online activists and representatives of digital initiatives and agencies in Lebanon who eagerly awaited to see who the online community had chosen as its best. Among the most long awaited reveals was the category of Blogger of the Year and Most Engaging Person on Twitter on the community side, while on the Business side Lebanese brands awaited the reveal of the Most Interactive Business on Twitter. And whilst Minister of Telecom Nicolas Sehnaoui, also an SMA judge, was in Silicon Valley accompanying another Lebanese blogger who won the Ministry’s contest, he greeted the public with a video message in the spirit of this digital occasion, encouraging online engagement and presenting the Most Engaging Diplomat on Twitter Diplomat Category.

The organizers also awarded the finalist who has created the most creative campaign to encourage voting for his nomination. “We were blown away by the dedication and passion with which our finalists starting campaigning for the win, from bloggers creating videos, crowd-sourced slogans and street art to brands giving away tickets to their most loyal fans in celebration of their social presence”, said Darine Sabbagh, Marketing Collaborator at the Online Collaborative, “This is why we felt that such campaigning efforts, that have supported the awards and further highlighted its key message together Online Collaborative’s mission in promoting social media’s force in changing the world around us, deserved a special highlight during the event.”

As the Strategic Partner for the event, Fida Chaaban Editor in Chief of RAGMAG commented that “The Social Media Awards ceremony was a spectacular showcase of Lebanon’s best and brightest of social media. RAGMAG Magazine applauds the loyalty that the online community has shown the Online Collaborative in this much needed endeavour, and we were especially pleased with the results of some of the biggest categories. Having long championed the individuals and companies active in this sphere, the SMA was a refreshing acknowledgement of online mastery and engagement. We look forward to continuing our relationship with the Online Collaborative as they lead Lebanon’s business community forward on the web.”

The Social Media Awards Beirut 2013 was launched as the first in the series of annual events which will become a staple in the calendar of Beirut’s digital society concluded Hijazi.

Newer Post Roberto Cavalli to launch the Aperitivo at Cavalli Caffè Beirut
Older PostBeauty is in the Eye of the Beholder: Vote for “Meals For Schools”