Serj Tankian: A Wonderful Performance at the Rock Festival 2011 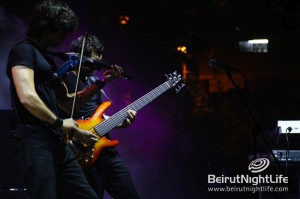 Serj Tankian the lead vocalist of System of a Down wowed his Lebanese fans during the Rock Festival 2011.  The Armenian-American singer-songwriter can confidently add composer, multi-instrumentalist, playwright, record producer, poet and political activist to his list of achievements… He took center stage at the grand Roman Amphitheater in Zouk Mikael with the Lebanese National Symphony Orchestra and performed a a unique and enchanting musical experience for Lebanon.

A touching moment during the evening was when Serj performed an Armenian song with his father – a remembrance they used to sing together when his was a child.

The event was organized by 2U2C.