The streets of Beirut turned Green Yellow and Blue yesterday, as a moving Brazilian flag was moving through the streets of the B-City. The fans of the Brazilian National Soccer Team invaded the streets after the Seleção succeeded in defeating Chile 3-0 in the World Cup games held in South Africa. Brazil went through to make to the quarter finals to meet the flying Dutch team in a much anticipated game. 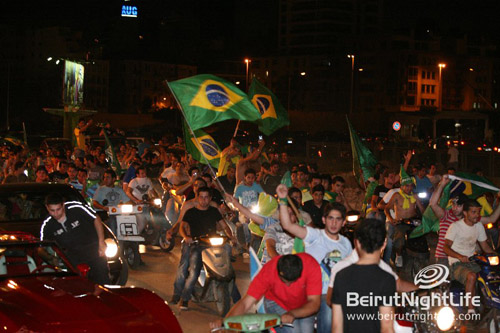 Fans of the Seleção went drove through the streets with flags, vuvuzellas, horns, and gathered to light up fireworks. The fans turned the beautiful capitol of Lebanon into Rio De Janeiro till the early hours of the morning dancing Samba on the tunes of Waka Waka.