NRJ Music Tour 2011: A Night That Goes Down In Concert History

Swarms of men, women and children ranging from ages 10 to 50 gathered in one place to revel in music. The Beirut New Waterfront was the meeting point of over 12 international artists and 25,000 individuals who came to enjoy the NRJ Music Tour 2011. Host Keith Thompson gave a brief synopsis about last year’s NRJ Music Tour then assured us we were in for a treat! The NRJ Music Tour 2011 was about to go down. Guaranteed to be bigger and better then ever! The evening of pure entertainment commenced. Our DJ for the night NRJ’s loved Mini-B started the night off with a couple tracks introducing two opening acts. Nancy, along with her four female back up dancers, took the stage. Soon after sexy Sofia Marikh followed brining along with her four male dancers. The audience began to warm up as the NRJ Music Tour 2011 was finally underway. 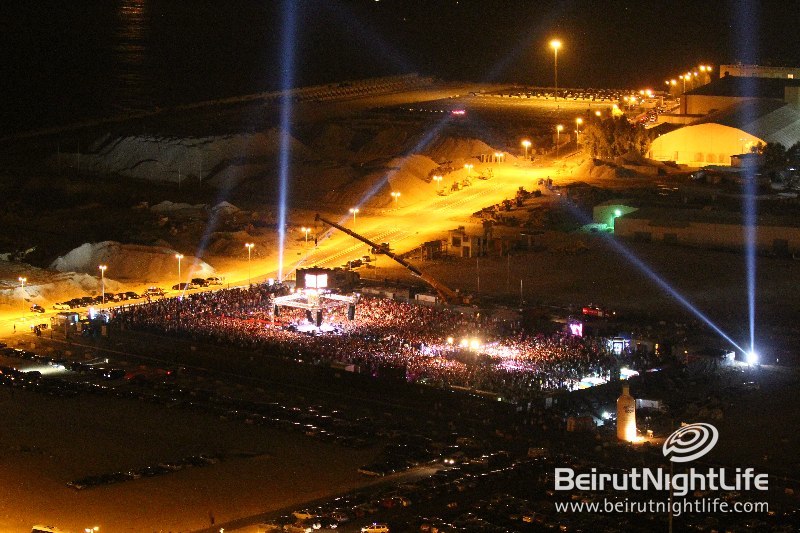 Fire breathers lit up the stage in between the next set to assure the audience was entertained while waiting for the next performer. A favorite among the ladies, traveling all the way from Romania, Dony hit the stage along side his sexy female dancers. The naughty Romanian explained to the crowd his needs singing, “I wanna scream, I wanna dance, I wanna hot girl”. He kept the sexy vibe going with songs, “Sexy thing” and “Nasty Dream”. 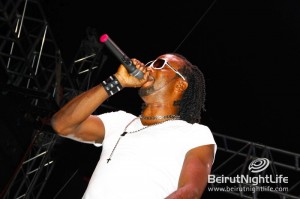 Mr. Dreadlocks himself Eddy Wata quickly came onto the stage. His rasta style energized the audience, making them move with his hit “I wanna dance”. Hundreds and thousands of glow sticks were tossed into the air. Soon the audience was part of the show. Eddy’s island feel continued with “I love my people” and “Lyke the way”.

My personal favorite firecracker Luciana powerfully stepped onto the platform and walked down the red carpet onto the stage showing love to her fans. Luciana is a pro! Touring the world makes her no stranger to the stage and it shows. Her first song had the crowd chanting, “I’m so hot!” Luciana and her fans “live to shock it shock it” so needless to say they raged to “I like that”.  Luciana humbly said “shukran” to Lebanon and wished us all a fabulous night.

Bashy coming in from London town ran up onstage and brought his DJ CJ Beats along with him. Bashy had the spectators dropping down low and coming back up again. He interacted with his fans walking out into the audience for his last song “Addicted to you”. 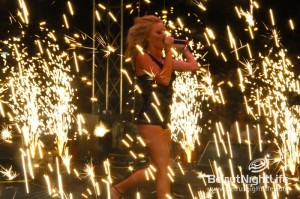 Emii came out dedicating her first song to the fans of Beirut. The sultry redheaded singer explained it was her first time in Lebanon and she is “Loving it!” She stated that it just might be her most favorite place she has traveled to. Emii opened with her hit “Mr. Romeo”. I must say her voice sounds very strong and soulful in person.

The tattooed bad boy with a boyish charm Chimpmunk came up rapping tongue twisters only a pro could recite. “Making it look easy now” with his song “Diamond Rings”. He continued his set with “Look for me”. One crazed fan couldn’t contain himself from making his way towards the singer, but security caught him in his attempt to rush onto the stage. Chipmunk then unpretentiously allowed fans to join him onstage for his last song “Champion”

Arash the Iranian-Swedish gave us a nice change of pace when he sang in his native tongue. He invited his guest vocalist to accompany him onstage to sing the beautiful hit single “Broken angel”. Positive vibes were sent out into the audience via Arash.

Keith Thompson charged onto the stage although this time not to announce a performer. The MC himself performed his own songs. He sang sending out the message “people united will never be defeated” followed by Lebanon’s anthem “Beirut is on fire”. The place was about to be set ablaze so Keith cooled down the hot crowd with champagne showers.

Drop dead sexy Alexandra Stan said “Bon Soir” to beautiful Beirut. Fireworks went off in the sky, adding to the excitement and the sea of people made noise for “Mr. Saxobeat”! Her delicious song “Lollipop” was dedicated to all the hot guys and girls enjoying the NRJ Music Tour 2011. Her live saxophone player added a special touch to the live show. Alexandra concluded her set with a jam she wrote especially for summer “Get back” (The single which reached number 1 on the NRJ Lebanon Top 20 Chart last week).

Multi-talented hip-hop act from Los Angeles CA, Iyaz, said “what up” to Beirut then delivered his smash hit “Solo”. He later dedicated “Pretty girls” to all ladies in the building. And his closing tune had everyone singing, “Shorty is like a melody in my head”. 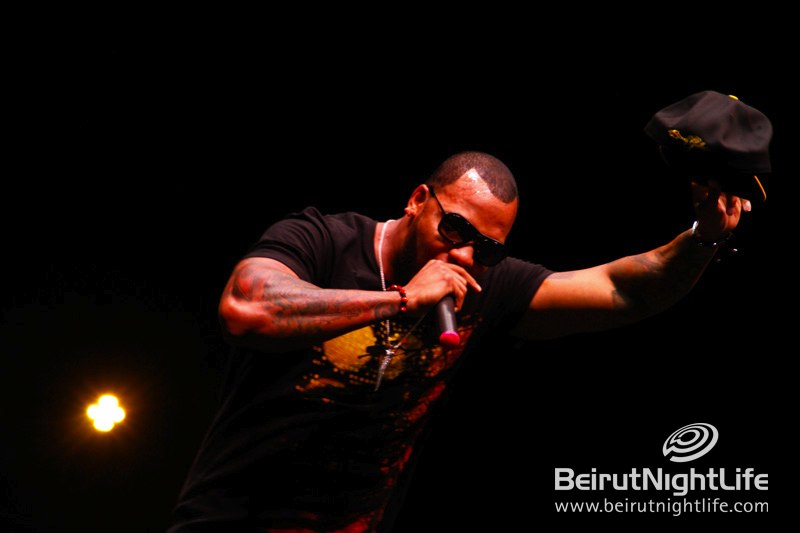 Next up was by far the most superlative performance of the night. Superstar from the dirty south, Flo Rida, killed it! Fans chanted his name when he hit them with his first single “Right Round”. He romanced ladies handing out long stem roses while performing “Where them girls at?” Then switched up his style from romantic to naughty having “shorty’s shaking their a**es” to “Get Low”. At this point it seemed as if the entire audience was on the stage. All hands were up and all mouths were mimicking “Oh hot damn this is my jam”. Not a person in the place wanted Flo’s set to end but at least he sent us off with a “Good Feeling”.

The third Romaian to hit the stage and the last star of the night brought on music that made the guests high. Everyone knew the words to Inna’s “The Sun is Up”. Her sweet baby doll voice echoed through the stands. Inna had concert goers feeling the music higher taking them to touch the sky singing the lyrics to “Déjà vu”. She concluded her energetic set with “Amazing” then gave her fans another dose of their favorite Inna single with her encore of “The Sun is Up”.

NRJ had a feeling no one would want to leave after such an extrodinary night of entertainment, so they supplied their own resident DJ’s “Bob” and “Base”  after the show to spin for the non-stop partyers and night owls of Lebanon.

The NRJ Music Tour 2011 was a spectacle of stars, music, and entertainment. Here’s to next year!!


Check out what some of the performers said about the NRJ Music Tour 2011!