From Lebanon, to Hollywood and back to Beirut, Lebanese artist Michel Fadel is a performer we are all proud to call Lebanese. Growing up in an artistic family, Michel Fadel seemed destined for musical success. After achieving a Master’s degree at the Higher Institute of Music, along with playing many live performances, traveling to Hollywood, winning prizes for his music, staring on the hit television show “Star Academy” as well as collaborating with huge artists such as Nancy Ajram, Julia Boutros and more, Michel has fully developed his life as a true artist and a one of kind musician. 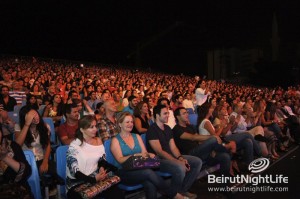 Smiles hit the faces of every concertgoer, at the Beirut Souks as part of the Beirut Holidays events, as Michel Fadel took the stage to perform his mind-blowing act, Michel Fadel Aal Lebnene. The very talented Lebanese Philharmonic Orchestra accompanied Michel for this one night only concert event. As a special treat Michel Fadel invited Pedro Eustache, the world’s best Fluto and Duduk Player, to join him on stage for the show as well as a number of guest musicians and vocalists. Another talent was also introduced to the full house at Beirut Souks, was the very talented violinist Dana Dabbous, who had her touch on the show.

Music fans, of all ages, came from all over Lebanon to catch this spectacular concert event. BeirutNightLife.com was there to capture the great moments at the Michel Fadel Aal Lebnene concert event…