Lebanon retains fatherhood of Hommos and aims at Falafel!!

Lebanese chefs, scored yet another victory in the super-sized food rivalry between Lebanon and Israel. Lebanon reclaimed the fatherhood of Hommos after breaking the record for the largest hummus bowl in the world on Saturday May 8, 2010 at the Kafaat University of Ain Saade. 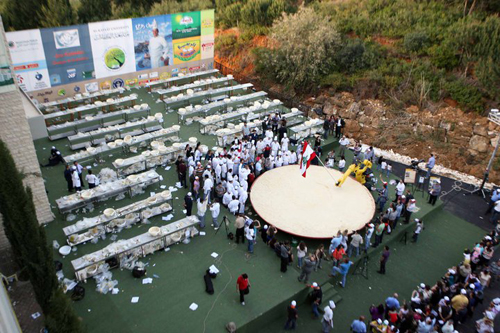 Chef Ramzi once again lead a team of 70 apprentices and students of the Kafaat culinary school to reclaim the record and defend the Lebanese origin of hummus.

An adjudicator from Guinness World Records present on both days to evaluate the records and announced the results at 6 pm on May 9, announcing the record to Lebanon.

With retaining the fatherhood of hommos, the chefs are preparing a 5 ton falafel paste to make more than 130,000 piece of falafel.