Lebanon- A Pool of Flags 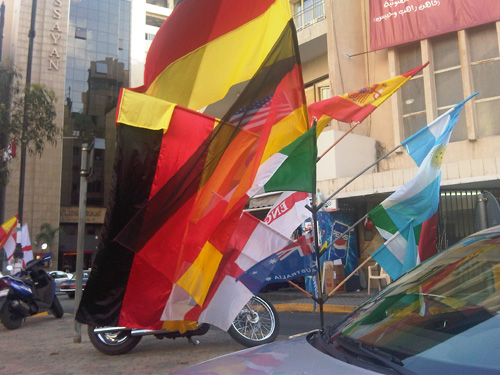 It is that time again. With the beginning of the world cup approaching, Lebanon is once again turning into the world’s biggest stadium, and Beirut, its capital, is already submerged in a sea of flags. For an outsider, the amount of German, Brazilian, Italian, Argentinean, Spanish and French flags fluttering from cars, hanging from balconies and spanning whole streets can seem a little startling, but the fact that the Lebanese soccer team has not even qualified for the competition has never been considered a reason for the Lebanese not to participate in the event: people simply bestow their fanatic support on one of the other nations’ teams. 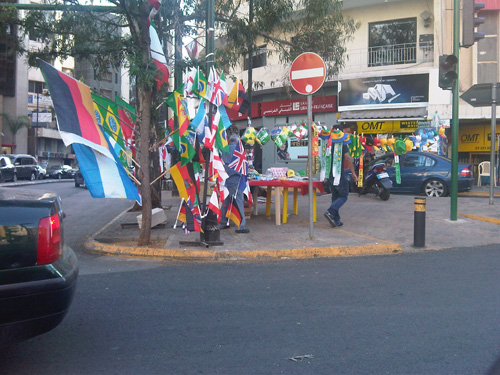 Judging by impressions, the German team has by far the most supporters, closely followed by Brazil. According to Ayman, a student from Hamra that has decorated his Seat Leon with no less than three German flags, this is simply due to merit. “Lebanese love football, and the Germans are the best team,” he claimed. “They have the best technique, the best spirit and they never give up.” If asked about the fact that Germany has not won the title in quite a while, he was adamant that this was mostly due to foul play: “They have been cheated, like last time against the Italians. I mean, two goals in the last two minutes, come on,” he said, with a knowing glance.

In Bourj Hammoud, the traditionally Armenian quarter in Beirut’s east, enthusiasm for Germany and Brazil ran so high as to come into conflict with the authorities: in the beginning of May, one could still admire the massive German and Brazilian flags the youth of the neighborhood had put up to span one of the biggest streets in the neighborhood, but they have since been taken down by the municipality. 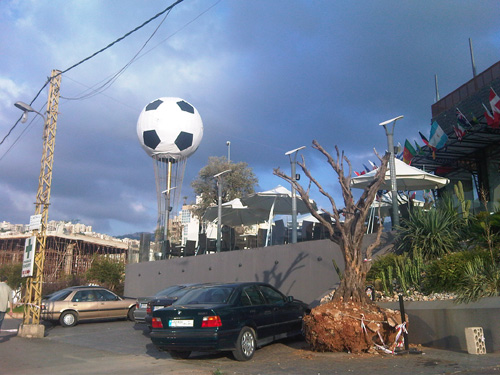 “Some of the young men got a bit carried away,” Joseph, a shopkeeper who also sells flags in Bourj Hammoud, admitted. “Now the municipality told them to stick to decorating their cars and balconies.”

In Haret Hreik,  the municipal authorities do not seem to be a problem. While there are fewer flags in the area on the whole, a number of streets sport huge German flags blowing like sails above the bustling crowds. But turn a corner, and you suddenly find yourself in a Brazilian stronghold, where Abbas, the 23-year old owner of a mobile phone shop, has rallied the neighbors around the goal of creating a strong opposition to the ‘Germans’. When he couldn’t find a Brazilian flag big enough for his taste, he got the kids together to sow 26 smaller ones into a massive composite flag that now flies above the alley, in addition to spending more than a week painting a ten-meter standard that hangs from a building just behind it.

“This street has always been with Brazil,” he enthusiastically explained. “I grew up here, and I cannot remember a time when I was not supporting Brazil. When the matches start, we put up a huge screen and a projector, and the Brazil fans from all over Haret Hreik come to our street to watch. And if we win, we all go over to the German’s street and make a lot of noise. Of course, they do the same when the Germans win.” 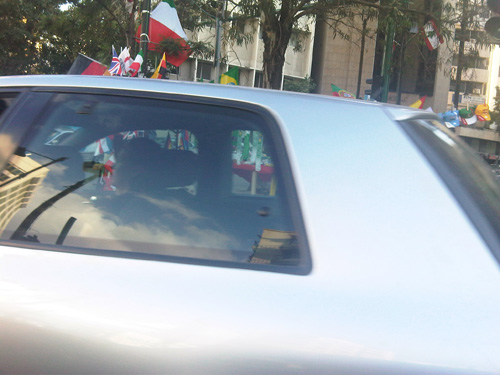 Abbas also explained that the street had been the center of betting for Brazil in past world cups, but added rather evasively that for some reason, betting didn’t take place in Haret Hreik anymore. “But we still have a lot of fun; I think it is going to be a very good world cup.” The Brazil-only policy is strictly enforced in his street. When one boy joked that he wanted to put up a German flag, Abbas told him exactly where he could put that in rather graphic terms.

Less successful teams like North Korea or the USA stand almost no chance, and most vendors don’t even sell their flags, although one said that South African flags had seen a rise in demand. For some Lebanese, the fact that they cannot support their own team is a cause for regret. “It’s a big shame, but I have no choice but to choose another team if I don’t want to be isolated from a global sports event,” Joe Khachan, an Italy supporter said. “And I couldn’t choose Germany; their supporters here in Lebanon are a bunch of wazwaz. Of course, I’m not speaking about the German people themselves,” he hastened to add, smiling at his German girlfriend.

Whoever ends up winning the world cup, the Lebanese will be sure to make the most out of this competition. Because even if their team is not playing, the Lebanese simply refuse to feel left out.