Jennifer Cardini at the Basement Beirut 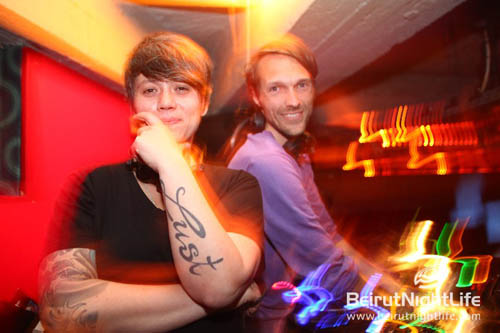 She has the best characteristics to ignite a party, she is “zee” french female who is not afraid to play hard music. Jennifer Cardini was at the Basement Beirut were she played some amazing sets.

Don’t tell her that she’s the priestess of minimal techno, or that her example has paved the way for the wave of French female DJ’s, you may well exasperate her. Jennifer Cardini is too natural and sincere to appreciate these compliments of caricature. She’s a musical aficionado for whom only one thing counts: playing the right track at the right time. And like all the greats she knows how to enhance the meaning of records with those which have the come before and those to follow.She’s been imposing her tomboy style behind the European decks for over ten years now.
Originally from the south of France, she witnessed the birth of techno in France. She lived the first raves intensely, at a time when with one photocopied flyer you could travel tens of kilometres to hear Jeff Mills or Laurent Garnier. She soon tried the decks out for herself one memorable night in Nice in 1994. Detroit was the mecca of the era and Jennifer’s deep atmospheres and refined melodic textures distinguished her sound even then. Like all deejays she’s known the downside of unpaid gigs and nights spent ‘on some unknown train station’s bench’.
But during those ecstatic and chaotic rave years she learnt how to take a reputable but undansable record and get everyone dancing… She met Miss Kittin and Sex Toy with whom she started producing and launched the Pussy Killers duo, with their brand of avant-garde electro-punk. This is the blueprint for the band of girls of the Pulp club, Fany, Chloe… who were to breathe new life into Parisian clubbing at the end of the 90’s.
By 1998, Jennifer Cardini was living in Paris and became resident deejay at the Automatik parties at the Rex club. She plays there monthly whilst honouring her other residencies at the Pulp (Lust, sucessor to the Underpressure parties of 2002/2004), the Nouveau Casino (Correspondant) and the Nitsa in Barcelona. It’s at around this time that she connects to the new German sound, being one of the first deejays to play this melancholy, sexy, stripped-down elegance over French dancefloor sounds marked by deep house and French-touch disco. With these ever-sensual mixes she supports the labels Playhouse, Sender, Kompakt, Klang, Erzat Audio, B. Pitch Control and Gigolo, when they were just starting out. To follow are Closer Music, Ellen Allien, Superpitcher and so many more new producers of the Cologne new-wave, Berlin and Frankfurt, without forgetting the techno of The Hacker, the new-wave of Siouxsie & the Banshees and Joy Division, Serge Gainsbourg’s pop and the late Elliott Smith. ‘I don’t understand people who get stuck in one style’.She appreciates small intimate connoisseur venues as well as the most prestigious international clubs, appearing regularly at the Tresor, WMF and Maria Am Ufer in Berlin, the Weetamix in Geneva, the Womb in Tokyo and the Click Clu in Hamburg.
Without forgetting the major festivals such as Germany’s Fusion, and the Sonar and Primavera festivals in Spain. In parallel she’s got into music production, collaborating with the Frenchman Laurent Hô for Damien Lazarus’ Crosstown Rebels label, or with the Henry Goes Dirty duo for an updated version of Amoureux Solitaires, to be released on the Kill the DJ label (of the parties by the same name).
The deep voice of Jennifer Cardini, already sampled on Me & Madonna by Black Strobe, give unexpected character to this naively frivolous hit produced by Jacno and the young Lio.After Electroniculture (UCMG 2001) and Flash (UCMG 2002), a vignette of the electro-minimal scene in gestation, Lust is Jennifer Cardini’s third compilation. Without a doubt it’s the most personal. But also the most accomplished, where she affirms the dramatic intensity of her style. She brings surprising power to some occasionally dark tracks.
Jennifer Cardini likes to consider this new compilation as a snapshot from her eccentric flightcase where no one track is simply deep, techno or electro, but reinvents its own style beyond fashion, as she does every time she takes the decks.