HOME TO A NEW KIND OF WILDLIFE

Until a few years ago, the closest thing Gemmayzeh got to nightlife was Qahwet Ale’zez, the elegant many-windowed café that is a favorite for backgammon players, and Le Chef, the Lebanese diner at the other end of Rue Gouraud, Gemmayzeh’s main drag. The neighborhood’s charming, Ottoman-era buildings played host to nothing wilder than the occasional dinner-party. 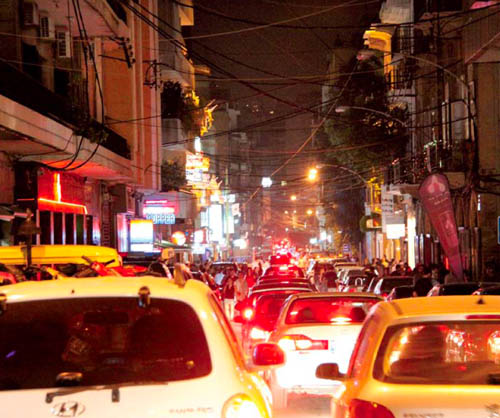 As the Monot phenomenon began to peter out, however, Beirut’s party people looked elsewhere for their nighttime entertainment. Nearby Rue Gouraud proved to be the solution. By the end of 2005, an astonishing array of bars and pubs sprang up, seemingly out of nowhere.

Four years on, Gemmayzeh’s renaissance shows no sign of dissipating. In spite of complaints about noise levels from residents of the quarter, as well as a government crack-down on opening hours, the revelers continue to return. New establishments are constantly opening their doors. The fun and frivolity is even beginning to seep into neighboring areas, with nearby Mar Mikael the latest spot to see an influx of hip night-spots.

On weekend nights, and many week-nights too, Rue Gouraud draws to a standstill as party-goers flood the street with their cars. Pounding beats waft up from stereo systems as the vehicles progress inch by inch to their destination for the night.

In a Darwinian struggle to survive amid the thicket of venues, Gemmayzeh’s bar-owners have adopted innovative measures to stand out from the crowd. An astonishing array of options is open to the consumer. From smoky bars hosting live jazz musicians, to chi-chi salons with designer furniture, to easy-going dives with a clientele that like nothing more than dancing on the bar, Gemmayzeh caters to a very wide palette.

Gemmayzeh’s bars also strive to innovate in the realm of the cocktail. Any cocktail-lovers should head straight for this quarter: Its bar-tenders continually battle against one another to come up with the most innovative combination of ingredients to throw into the shaker.

This competitive spirit isn’t confined to the establishments – it also extends into the clientele. Gemmayzeh is a place to see and be seen. Those who cross the threshold want to look their best, and are prepared to go to considerable lengths to achieve their aim.

It isn’t an area for the scruffy or the sartorially unaware. The revelers who throng Rue Gouraud put time and effort into constructing their image, and it shows. Whether dripping with Louis Vuitton logos, or sporting an asymmetric haircut and concept specs, the attendees of Gemmayzeh are a forced to be reckoned with. Of course, it’s the women who make the most daring moves. Gemmayzeh is a place where hemlines have risen so high that they’re practically non-existent. Immaculately-preened girls totter in vertiginous heels, wearing the tiniest of hot-pants with plunging backless tops. The area has become a law unto its own. As Gemmayzeh is increasingly consumed by night-spots, the party people who flock there have developed their own rules, their own codes and, especially, their own dress-sense. Although it’s the epitome of a certain side of Beirut life, Gemmayzeh is like no-where else in Beirut.