La Fete de la Musique, an annual global celebration of music, arts, and life in the vibrant urban cities of the mainly Francophone countries. 110 cities in the world participate in this free-of-charge extravaganza of arts and musical performances.

Beirut’s version of the Fete de la Musique has become a landmark event that showcases the best of Lebanese underground artists in the city’s central district and neighboring areas such as Hamra. 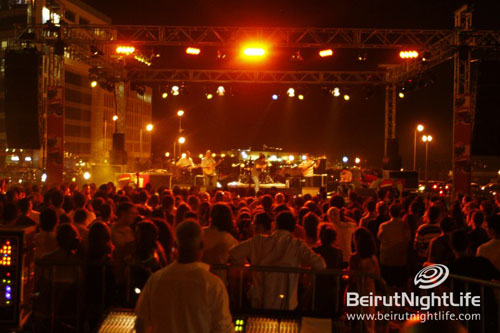 The spectrum of musical genres was divided among some 13 stages scattered across Beirut. From public gardens, to ancient Churches, Beirut Souks, the abandoned Dome cinema, and even public libraries, all of these platforms welcomed the thousands of visitors that swelled the streets of Down Town Beirut and Hamra.

Allow me to begin by saying that each and every single person who was at the Dome in Down-Town Beirut on Monday 21st of June 2010, starting 9:00PM is a privileged person. Why? Because this is the last time the Dome will host the Basement’s magnificent lineups of DJs and VJs before its demolition.

Thousands of people flocked to the abandoned cinema theater to witness this leg of the Fete. Young people who otherwise would not be able to go into the Basement-proper, fathers carrying their newborn children, senior citizens looking at what has become of their childhood screening room, and of course the Basement regulars who know all too well what to expect from the Basement at the Dome.

After live and DJ sets of Deep House, Dubstep, and Techno by Vanclode Jandame, Dirty Diana, Index/left and Dansz, the man behind the Basement movement, Jade, transformed the crowd into a sea of hands and energy with his Tech-House set that featured all-time favorites from Faithless and the Prodigy, as well as his own hits such as “Ekhlaa” to which those familiar with Jade song with as they jumped up and down in excitement.

Another international DJ, this time from France, Debruit took the night into a Breakbeat session that Lebanese clubbers were not quite accustomed to, but grew fond of very rapidly. Then, the second half of the Basement duo, Diamond Setter, continued the Tech-House Jade had kicked off, though with his bassier trademark sets.

Then, it was the star DJ of the night, DJ Namito. This tech-house legendary producer from Berlin is a phenomenal DJ with hits such as “City of Gods” and “Zizou” who has also made a name for himself as big has his DJing persona in the human rights activism circles.

Alias and Purple wrapped up the Tech-House marathon and gave the decks away to Psychogenesis’ psychedelic beats, which ended the night (or rather morning) with a fast-paced, trip-inducing set.

Offwhite, Labo Strongsky, VJ Mosig and M.Visuals translated the music’s magic into moving pictures. From issues in brain-boosting technology, to exploring the insides of a computer, to flowers morphing into bullets and USB plugs as children chewed on what looked like pills while city landscapes transformed into galloping horses, or enchanting patterns that eventually found their way into explaining evolution, with different degrees of man’s evolution getting into a fight, that ultimately metamorphosed into an elaborate mathematical equation complete with limits and infinities. And that’s just a brief part of the VJing journey clubbers were taken on.