Fashion Show by Bras for a Cause

With more than a hundred creative entries submitted from across the Middle East and other parts of the world, Bras for a Cause Middle East  proved that designing for a cause never goes out of style. 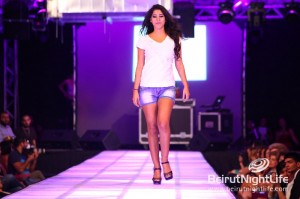 A fundraising fashion show was held at the Beirut Souks to support breast cancer awareness as well as local and international organizations. The event started off with a speech from the organizers, ONE WIG STAND and Fustany.com, explaining the cause, followed by a live performance by Black Honey, followed by Lazzy Lung. DJ Dimix then hit the decks to launch the fashion show.

Established designers showed off their tremendous support for this campaign by designing original bra and t-shirt designs within the “Designer Piece”Category that was actualized by the designers themselves and were auctioned during the runway show.
Bras for a Cause is supported by sponsors: Ford, Promod, Coca-Cola, Galeries Lafayette, Zeynep Hanif Jewelery, Beirut Souks/Solidere, Estee Lauder, K-Lynn Lingerie, The Fashion Network, Voices for Charity, Crown Outlets, London Models, Ksara, Soha, Aennis Eunis and Dinz Clothing.