The second day of the 2013 Emirates Airlines Dubai Jazz Festival blasted through, with the Jazz Garden welcoming keyboardist, composer and producer Nicholas Cole, followed by seasoned composer, musical director and producer Chuck Loeb who was quite friendly with the crowd.

Once again, people come together in the central arena for the main act. At 10:30pm, light rays dawned upon us and thunder roared. Thankfully, the weather was not getting worse; those were the opening effects of 3 Doors Down, starting their Dubai concert with “Time Of My Life”, their favorite song as we discovered earlier that day during our one-on-one with Brad (lead vocalist), Chris (guitar) and Todd (bass). 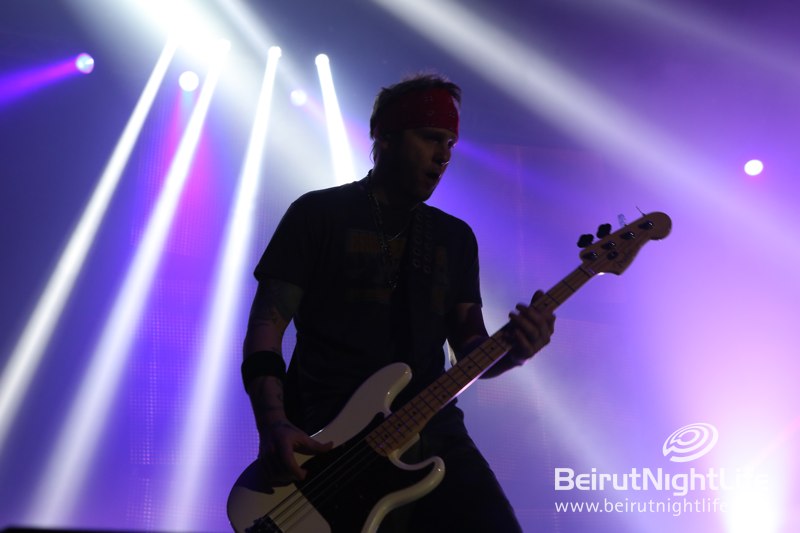 “It’s Not My Time” followed, but it was time for us fans to sing the lyrics out loud.

After “Be Like That”, Brad thanked fans for having the band, and for having them back.  They then performed “Same Road”, and calmed the pace with “Away From The Sun” and “Let Me Go”, two songs that registers high on the emotional rock scale. But we were far from letting 3 Doors Down go…

“Thank you so much. So, like I was saying, I never thought we’d make it this far. Never thought we’d be playing for so long that we’d make a greatest hits album,” said Brad before singing “Goodbye”, “Loser” and “There’s A Life”, repeating his signature “Thank you my friends,” after each song.

“I challenge you my friends, in the next day, or the next month, to find an opportunity to be one light for someone else,” pleaded Brad upon performing “One Light”.

The concert picked up further with “Let Me Be Myself” and “Here Without You” to which the crowd echoed, and peaked with the band’s first single: “Kryptonite”, driving fans wild.

The second day of the Jazz Festival witnessed a better vocal performance than the previous night, but fans seemed to still lack some enthusiasm, perhaps due to the cold weather.

The first weekend of this musical celebration was off to a good start, and Chillout Productions sure did deliver a strong lineup. We are looking forward to next weekend, with Deep Purple and The Script taking the stage live.