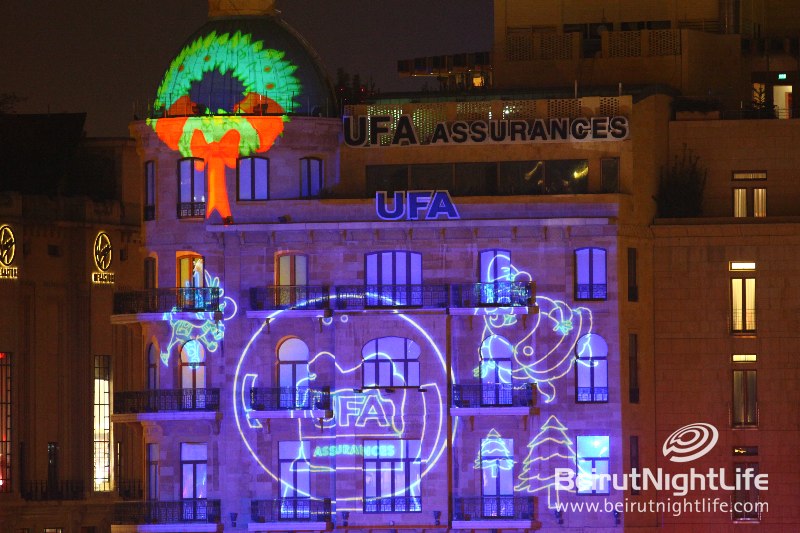 UFA Assurances has turned Downtown Martyrs’ Square into an art hub this season. The first of its kind event and artistic initiative, the 3D projection mapping on the walls of the UFA building is a head turner. The event also features special commissioned showpieces as well as a competition of 15 of the best animators in Lebanon.

Made possible thanks to the inspirational support and generosity of UFA Assurances, the UFA 3D Mapping Event is an urban art experience, a first of its kind in Lebanon and the Middle East!  3D mapping is a new form of urban art popping up in cities throughout the world. This art of creating video displays make buildings come alive in light, color and motion.

Urban Facade Animation is a non-profit urban art experience that aims to celebrate the history of Lebanon, celebrate Martyrs’ Square and most of all celebrate the creative talent of Lebanese artists, designers and animators.

Featuring special shows “Law Hakouni 3an Beirut” (Hugo Raybaudo, Owen Carson, Nomadic Dream), “Colors of an old Beirut”, and large scale animations from the 15 best animators and visual artists in Lebanon. The vote will constitute a combination of public vote and jury vote.

Public can vote on www.ufa3dmappingevent.com for the winner of $4000 granted by UFA Assurances. Winner to be announced mid-January 2011