There are musical experiences that years after years have proven to you to be just:

Musical experiences that seem the same as all the ones before; years after years!!!

Be Ready to be musically REVITALIZED

Be Ready for a heavenly, celestial & Epic music that will induce in you an altered state of consciousness……..

Be Ready to leave the everyday world behind you and enter into a communal place that is sacred
&
Prepare yourself for the DJs/Producers who can hold a crowd of thousands of clubbers:

through their : Uptempo, uplifting and euphorically energetic Sounds that will make you just want to dance throughout the night. 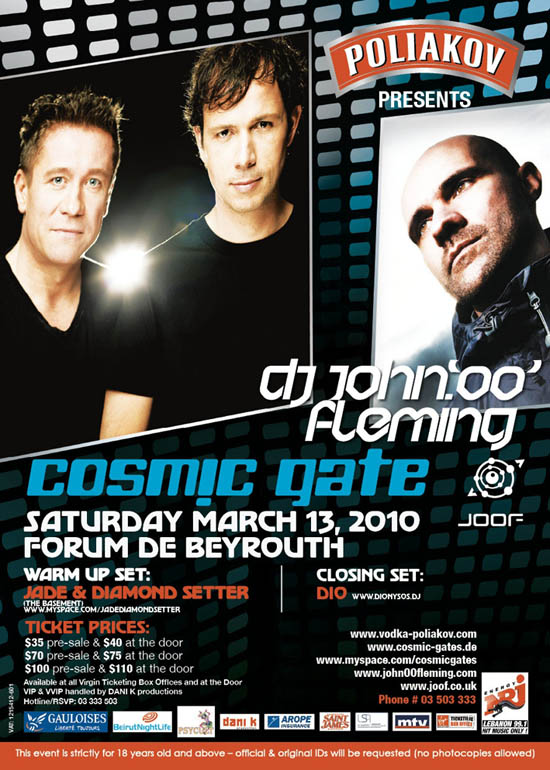 One of the dance music industry’s most revered personality & a member of the pioneering group of DJs who were part of the 1980’s rave revolution: A True Legend

ONE OF THE DANCE MUSIC INDUSTRY’S MOST REVERED PERSONALITY & A MEMBER OF THE PIONEERING GROUP OF DJs WHO WERE PART OF THE 1980’s RAVE REVOLUTION: A TRUE LEGEND

and this Past Summer’s biggest Clubbing Events: Above & Beyond Live – the 2009 Edition & Ferry Corsten’s Twice In A Blue Moon –The Experience

Over 10 boundary-pushing years, Nic Chagall and Bossi have evolved Cosmic Gate into one of the most creative and highly-sought-after electronic music acts in the world.

Revered uber-producers, their musical acumen has seen them become long-term favorites of the trance’s Big 5 DJs with their 4 hugely-received albums transporting anthems like ‘Body of Conflict’, ,Not Enough Time’, ‘I Feel Wonderful’, ‘Analog Feel’, or the classics ‘Exploration of Space’ and Fire Wire to the dance-floor.

As DJs, their kinetic, blood-pumping live performances are seen by hundreds of thousands of club and festival goers annually.

Playing a 100 nights every year, it’s this ever-visible club presence that saw them reach their highest position to-date on the DJ Mag Top 100, landing as highest climbers at No.19 in 2009.

In 2009 Nic and Bossi released their fourth studio album ‘Sign of the Times’, which contains 11 floor-monsters.

In 2010 Cosmic Gate are set to release the 4th volume through Tiësto’s Black Hole label.

> Tiësto (About the smash single ‘Not Enough Time): “a great and solid vocal trancer that touches all your musical senses!”

> Armin Van Buuren: “The new Cosmic Gate album is one of the most anticipated releases of this year. They are on the forefront of the dance music sound of the moment… Bring on 2009!”

John 00 Fleming is one of few artists that has maintained underground respect whilst enjoying commercial success during a career spanning almost a quarter of a century.

John has sold 10 million records, with singles on over 100 mix compilations and has remixed a cross section of elite artists whilst DJing across a global playing field.

A member of the pioneering group of DJs who were part of the 1980’s rave revolution, John has gone on to have 10 mix compilations and 5 singles in the UK Top 40 charts on labels including Virgin, EMI and Warner Music.

A pioneering producer and DJ, John 00 Fleming has led his own sonic movement, respected by artists across the globe from Moby and Muse to Jean Michel Jarre.

John is quite simply a much-loved DJ.

John is consistently rewarded by the rock solid support he gets from his dedicated fan base who follow him around the world and line his wall with gold discs, earned by the sheer hard work John has put in over two decades.

He simply has a passion for what he does.

In collaboration with: Dani K Productions

Newer Post How to Behave in Nightclubs
Older PostRap Up