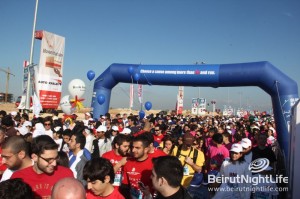 The 9th edition of the BLOM Beirut Marathon was a success for yet another year as over 30,000 Lebanese people and prominent figures from all over the country participated to run for a cause. The races were as follows: The 42k race, the 42k race on a wheelchair, the 10k fun run, the 10,000m race, the 10,000m race on a wheelchair, the 5k youth run and the 1k run with mom.

As Mr. Zeid Khyameh, the General Director of the Ministry of youth and sport, said during a press conference held at Mike Sport on the Dora Highway, “the Beirut Marathon Association has created a sports culture and has made Beirut, in addition to being a hub for literature, arts, and culture, a sporting destination for athletes from the region and the world.” Mr. Khyameh also spoke of the campaign slogan saying: “the invitation to ‘take it to the street’ to run and compete is the antidote to invitations to take conflict to the street. The invitation to take it to the street and run means that we are all Beirut, we are all Lebanon.”

It is this feeling of unity that we hope to achieve one day in Lebanon; and not only for one day.