Beirut is getting ready to host the musical event of the year as Signature Productions is launching the Beirut Music Conference– BMC for the first time in Lebanon from the July 14th until the 18th of July, 2010. So Beirut, lets get ready to compete with Miami, its Beirut VS Miami, lets show the world why the B-City is the and one of the most glamorous tourist destinations (The Observer Magazine and the New York Times)

The DJ Line Up announced will include: 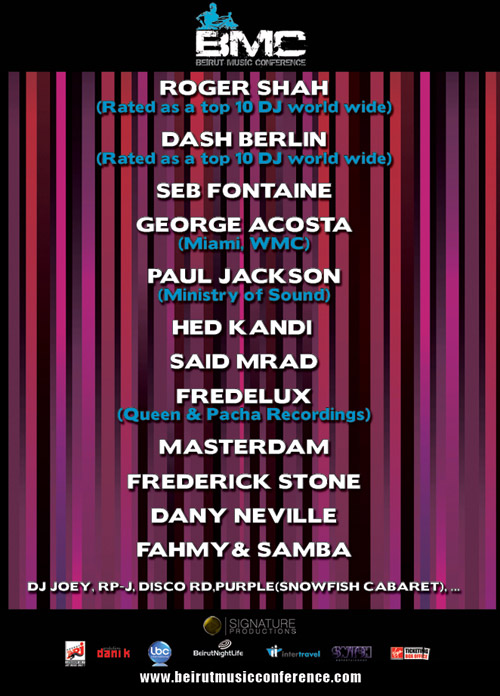 The schedule announced will include:

In 2010, and for the first time in the Middle-East, one week will showcase the most exclusive and notorious line up of local, regional and international DJs providing Lebanese nightlife trendsetters with a memorable partying experience.

After Miami, the BMC will hit the dance floor with an exotic heat wave that will blow the minds of music lovers, dance fans and industry professionals.

Standing up to its reputation as the best Party City in the world The Observer Magazine and the New York Times), Beirut had brought you back in 2009 legendary names such as Snoop Dog, Pussycat Dolls, Paris Hilton, Carl Cox, Paul Van Dyke, David Guetta, Tiesto, Armin Van Buren to name a few. This summer, get ready to experience the hottest parties ever… Lebanon will make musical history by setting the new international summer party standard, placing it firmly as the jet set party circuit stop of 2010!

For more information about BMC, please log on to: www.beirutmusicconference.com 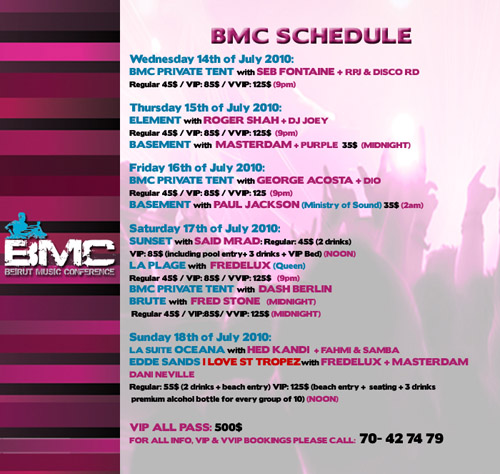