It is Saturday night and the Porsche drivers turning into Monot Street don’t notice the shelled-out villa on the corner. Chunks are missing as if it has been consumed by leprosy and patches of exposed brickwork stand out like scabs. The drivers join a queue of Mercedes and BMWs revving and hooting their way towards the bars and clubs, passing shops with bullet riddled shutters. Seven years ago Monot Street was nothing. Today, it is the hub of Beirut’s nightlife – the biggest party scene in the Middle East and one that its devotees rank higher than that of New York or London.

It is Saturday night and the Porsche drivers turning into Monot Street don’t notice the shelled-out villa on the corner. Chunks are missing as if it has been consumed by leprosy and patches of exposed brickwork stand out like scabs. The drivers join a queue of Mercedes and BMWs revving and hooting their way towards the bars and clubs, passing shops with bullet riddled shutters. Seven years ago Monot Street was nothing. Today, it is the hub of Beirut’s nightlife – the biggest party scene in the Middle East and one that its devotees rank higher than that of New York or London. 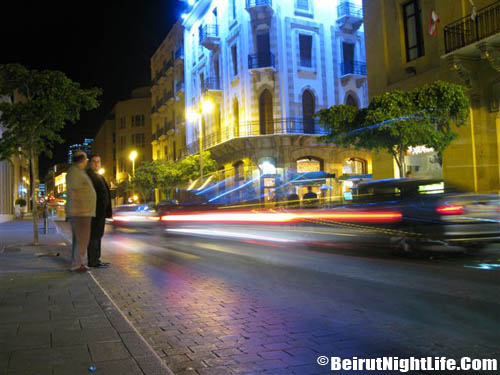 A row of 911s is already parked outside Crystal, the largest club in Lebanon, where doormen are sifting out undesirables hoping to slip into its retro-chic white interior. Those beautiful enough to get in – appearance is the only criterion – will find no dance floor, but lines of tables where the remains of dinner, an essential part of having a good time, have just been cleared away. The furniture now serves as podiums for young men dressed in designer shirts and jeans who are hacking at the air in time to the chart music, when not on their mobile phones. They have taken the same precise care over their hair and stubble as an Englishman does his lawn. The women, their long dark hair freshly blown into shapely oil slicks running down their backs, are dressed in brief skirts or artery-restricting jeans. Some have clambered up onto the bar, others hang around waiting for attention with artificially enlarged pouts. A handful are so overly made up they resemble transvestites. The velvet people are smoking with such determination they will be sending oncologists to an early grave.

There is intense competition between bars and clubs in Beirut which open and close within months as the whims of revellers change. Crystal has managed to keep their attention since it opened seven months ago with a gimmick exploiting the vanity of some of its clientele. Whenever someone buys a US$3,000, nine-litre bottle of Moët & Chandon, the music stops, a spotlight is beamed onto them and an anthem is played as two waiters carry over their order. “It freezes the club for a whole 45 seconds,” gloats the 27-year-old owner, Dani Khairalla. “What I’m selling is self-satisfaction. It’s all about showing off.” In a final homage to their customers’ public display of excess, the club inscribes their names on a board by the door. “It’s all about the cars and the women. But it’s a very small percentage of the population.”

Nevertheless, over 100 such bottles have been sold since the club started – all to Lebanese men. One wonders with the dire state of the economy – the national debt stood at $31bn at the end of 2002 – how on earth people can afford such gross indulgence. Some of them, it would seem, can’t. “They pay it off in instalments,” hisses one regular. “The waiter told me.”

Many of those out tonight weren’t born when Beirut was cool the last time around. In the 1960s the capital was part of a Mediterranean circuit travelled by rich westerners which included the French Riviera and Alexandria, earning a reputation as the Switzerland of the Middle East. Now, however, Beirut is best known for its brutal civil war which strangled the city from 1975 to 1990 and its notorious hostage-taking.  But even a war couldn’t stop Beirutis partying. “The nightlife just went underground to avoid the bombs, “We just used to put the music on louder, so we couldn’t hear them.” 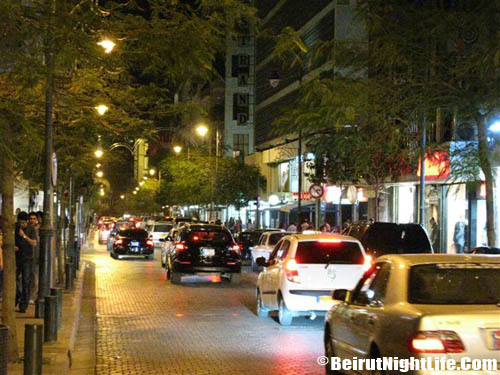 Pacifico was the first nightspot to open in Monot Street, in 1997, introducing the mojito to Beirut. It has since been joined by a rash of smart, stylish designer bars. Lila Braun, with its white walls and black leather seats, has a distinct metropolitan coolness. As well as a satisfyingly long cocktail list (the bar staff were trained in Germany as no one here had a clue how to make them), it serves finger food such as dried figs baked in halloumi and dates filled with goats cheese. Red, a lounge bar with moody red walls and white leather banquettes, also attracts a good proportion of the cheerful in-crowd. But most striking is Centrale, a 10-minute walk from Monot Street. A former villa, its war-stained walls have been conserved behind metal grilles. On the ground floor is an attractive restaurant. But it is the bar which forms the roof that you really want to see. Cylindrical with black walls, it resembles a sort of futuristic fuselage. Glass windows in the metal flooring enable you to see the diners below. When the fancy takes the barman, the roof slides open exposing the night’s starry rash. You could happily spend the whole evening there. Indeed, you could spend a particularly happy evening in most places here.

The atmosphere in the bars and clubs, none of which has a entry fee, is distinctly playful as most young, middle-class Beirutis know each other. Muslims and Christians now have one thing in common – a singular determination to have a good time. With no dinner-party culture, they hit town with gusto. Many don’t bother with shorts and order their drink – usually vodka or whisky – by the bottle. And places stay open as long as people are buying.

Some start their evening at one of the many pavement restaurants downtown, a 10-minute walk from Monot Street. (Not that anyone walks here – even the seafront McDonald’s has valet parking.) The area is a pedestrianised grid of neo-classical sandstone buildings, their Ottoman and colonial influences restored almost to the point of sterility after the war by a private company part-owned by the prime minister. It is pleasant enough, but there is little sense of being in the Middle East. A handful of solitary, bored-looking armed soldiers stand on guard, no doubt wondering what’s for tea. You’d have trouble finding even a fag end on the ground and there are no hawkers. One senses that the riff-raff are kept firmly at arm’s length. For, in a city which goes out to see and be seen, this is where they come to buy their outfits to ensure they are turning the right heads. Aishti, Beirut’s answer to Harvey Nicks, sells as many expensive designer brands you could shake a crocodile Prada handbag at (US$6,555 and only one left).

The weekend starts early here. It is Thursday evening at Zinc, a bar in a French colonial villa which was taken and retaken so many times during the war it was called the Bitch of Beirut. The lights are low, the walls a lugubrious red and the music is at such a volume it prevents casual conversation. The evening has slipped into the early hours of Friday morning and Sam has to be up in a few hours for work – if he gets to bed at all. “This is the best nightlife you will ever find, and I’ve been all over – New York, London, Milan and Paris,” he says, ordering a round of champagne and tequila slammers. “This place was part of no man’s land during the war, but the only casualties now are the ones who are getting trampled on because they are too drunk. I usually spend up to $150 a night. We’re shrewd business people, but when it comes to having a good time, money is the last thing on our minds. The war was so long, we feel the need to make up for lost time. I go by one expression in life – work as if you are going to live for ever and party as if you are going to die tomorrow.” But there is another reason why young Beirutis hit the bars with such zeal. “People don’t live together until they are married and so live at home,” explains one reveller. “The women are not allowed to sleep over at their boyfriend’s house, so when they go out, sure they have fun. Maybe they go and get laid. But there’s a curfew. Everyone has to be home at 4am.”

It is Friday night in BO18, an underground nightclub in an area that was once a refugee camp. Downstairs, in the funereal gloom, the floor is covered in small low tables made of smoked brown plastic which are lit from the inside. On top of each is a framed black and white photograph of a dead jazz musician, flanked by a single red rose and a candle. The tables are surrounded by stout wooden boxes. Lift up the heavy lid and you have a seat, complete with coffin-esque red plush cushion and backrest. Shut it again and you have your very own podium.

The manager flicks a switch and the black roof slowly parts until wide open, like a mother spaceship opening its doors to release a smaller craft. The music floods out into the weak light of a new day. Not that anyone here has finished with the old one. This is one of the most popular clubs in Beirut, yet it is 2.30am and virtually empty. “It hasn’t started yet,” the waiter says. “They come after they’ve finished in the bars.”