Armand de Brignac (Ace of Spades) launched in Lebanon at the Eau de Vie, Intercontinental Phoenicia Hotel, welcoming a select group of esteemed guests to come witness the reasons why Armand de Brignac is so special! 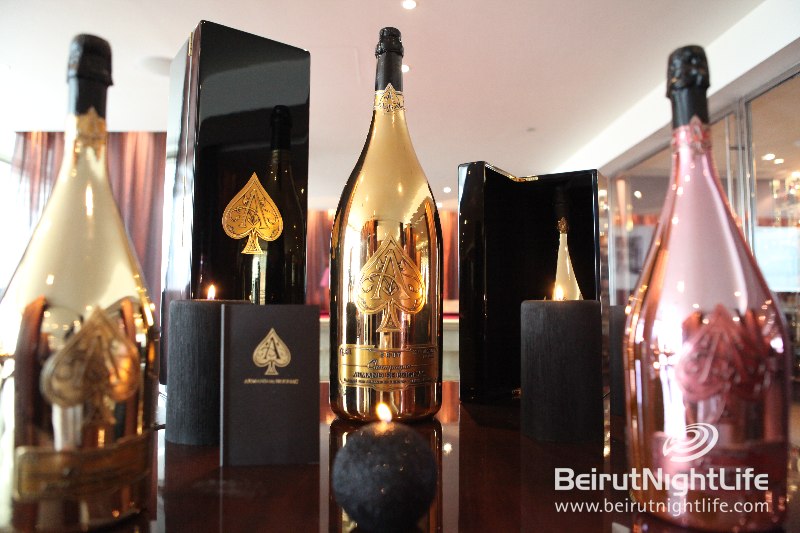 Armand de Brignac is No. 1 on the Fine Champagne Magazine list of the 100 Best Champagne in 2010 and one of the most celebrated, the best and highest priced (around $400 in Lebanon) Champagne in the World.  “…A fine, smooth and creamy champagne with underlying power and great mineral freshness. Classic, restrained and energetic in style, it has everything a truly great champagne can offer.  Armand de Brignac’s flashy golden bottle is eye-catching in the true meaning of the expression.  It is always rewarding when the content of the bottle matches its price and reputation,” explains the Fine Champagne Magazine.

Everything in Armand de Brignac Champagne speaks of quality, even its bottle. The eye catching opaque metallic gold bottle with the Ace of Spade label made of real pewter, polished and applied by hand. The bottle looks stunning in its lavish black velvet lined black lacquer box.

Recently this month, an interesting piece of news to share with our readers,  a bottle of Armand de Brignac (Ace of Spades) known as “Nebuchadnezzer” (15 ltr) became the most expensive bottle of champagne (£80,000) sold in London.

The bottle in question, according to deluxe-lifestyle.com, takes six months to make being hand crafted by eight champagne glass artisans. The Mega bottle of champagne was an opportunity to celebrate the inauguration of a new members’ club in London. The drink was put on the bill of an European businessman remained anonymous.