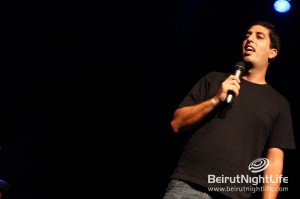 Australian comedic genius Anthony Salame went all out in Hamra last week by bringing his hilarious show live to the Babel Theater on October 20 and 21.

Australia’s king of urban comedy began performing  in 2005 and has steadily built an army of fans with his cheeky dialogue, clever observations and energetic performances.

The show featured Stand up Comedian George Tarabay from ” Lebnanese E7 ” and an Opening Set by MC Zeinedin who performed Lebanese Hip Hop at its most advanced and raw form.

The venue was packed two nights in a row, as the audience laughed for hours at Saleme’s much-loved sketches, and side-splitting material.