Anjar, 58 km from Beirut, is completely different from any other archaeological experience you will have in Lebanon. At other historical sites in the country, different epochs and civilisations are superimposed one on top of each other. Anjar is exclusively one period, the Umayyad.

Lebanon’s other sites were founded a millennia ago, but Anjar is a relative new-comer, going back to the early 8th Century AD. Unlike Tyre and Byblos, which claim continuous habitation since the day they were founded, Anjar flourished for only a few decades. Other than a beautiful Umayyad mosque in Baalbeck, we have few remnants left from this important period of Arab history. 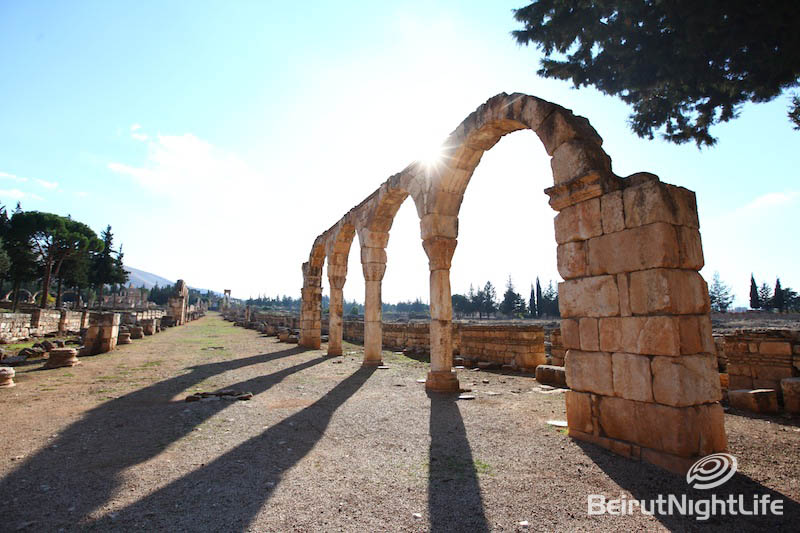 Anjar also stands unique as the only historic example of an inland commercial center. The city benefited from its strategic position on intersecting trade routes leading to Damascus, Homs, Baalbeck and to the South. This almost perfect quadrilateral of ruins lies in the midst of some of the richest agricultural land in Lebanon. It is only a short distance from gushing springs and one of the important sources of the Litani River. Today’s name,”Anjar” comes from the Arabic Ain Gerrah, “the source of Gerrah”, the name of an ancient stronghold founded in the era prior to Hellenistic times. Anjar has a special beauty. The city’s slender columns and fragile arches stand in contrast to the massive bulk of the nearby Anti-Lebanon mountains – an eerie background for Anjar’s extensive ruins and the memories of its short but energetic moment in history.