On June the 9th, the legendary band for their latest album tour, and music lovers in Lebanon made sure they had this Wednesday night freed up for the massive event. Placebo, undoubtedly one of the most successful rock band of our times, rocked Forum De Beyrouth.

The night began at 8:00 PM sharp, with your Lebanese rock band the Kordz performing the opening act. The Kordz proved again they were up to the international scene playing the best of their tracks such as ‘The Last Call”, “The End”, “Save Us” and a lot more, setting the crowds in the right direction before Placebo hit the stage. 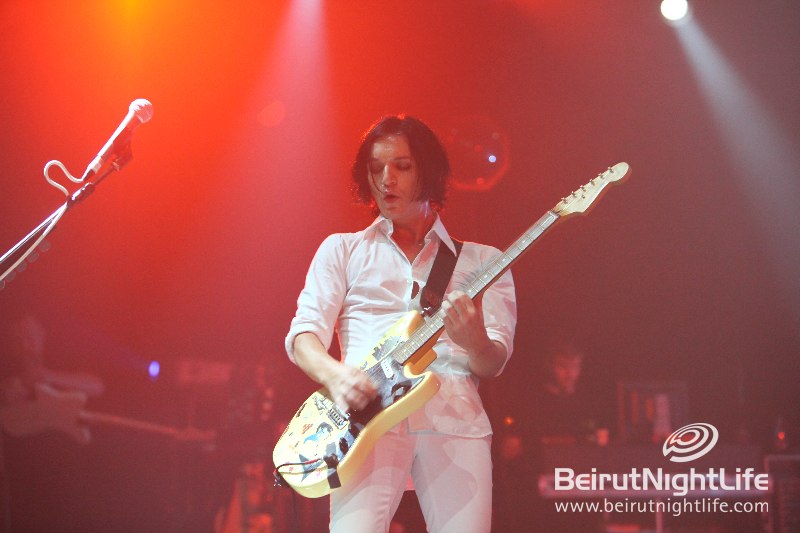 At around 9:00 PM, Brian Molko, Stefen Oldsal and Steve Forrest stormed the stage and kicked-off an intense 2 hours of Placebo’s latest songs and greatest hits. Clad in white, Brian and Stefen seamlessly merged song after song, changing their guitars after each performance. Steve chose to remain bare-chested, revealing his intricate tattoos on his torso and arms as he furiously led the band’s tempo up, down, high and low.

Helping the trio were 2 bassists and a woman who took command of the many synthesizers and an electric violin.

Fans in the golden cage, standing area and seated areas all recited the lyrics with Brian, hands in the air, heads bobbing and feet stomping. Song after song, revelers were taken on a trip by the lights and sounds emanating from the LED-lit stage.

After a brief intercession, Placebo got back on stage, much to the delight of the thousands of fans. The band continued strong with classic songs from their older albums. Then, at around 11:00 PM, Steven threw his drumsticks to the crowd and Placebo took a bow to thundering cheers, applause and thousand of mobile phones and cameras capturing every second of the rock magic.

The songs played included, “For what it’s Worth”, “Ashtray Heart”, “Battle for the Sun”, “Speak in Tongues”, “Breathe Underwater”, “the Never-Ending Why”, and a lot more.

The alternative rock band is renowned for varying their style of music, with every album showcasing a different aspect of human nature. From raw, minimalistic instrumentals in the beginning, to slower more melodic tunes later, Placebo have recently begun experimenting with less traditional sound production tools, such as synthesizers.

As Brian described it will be, “it was a  Loud Energetic Passionate Performance, it was a Rock Show not a Magic Show”. NRJ has brought the rock band of the decade to Lebanon, and Lebanese rockers had a fantastic night with the unique band.