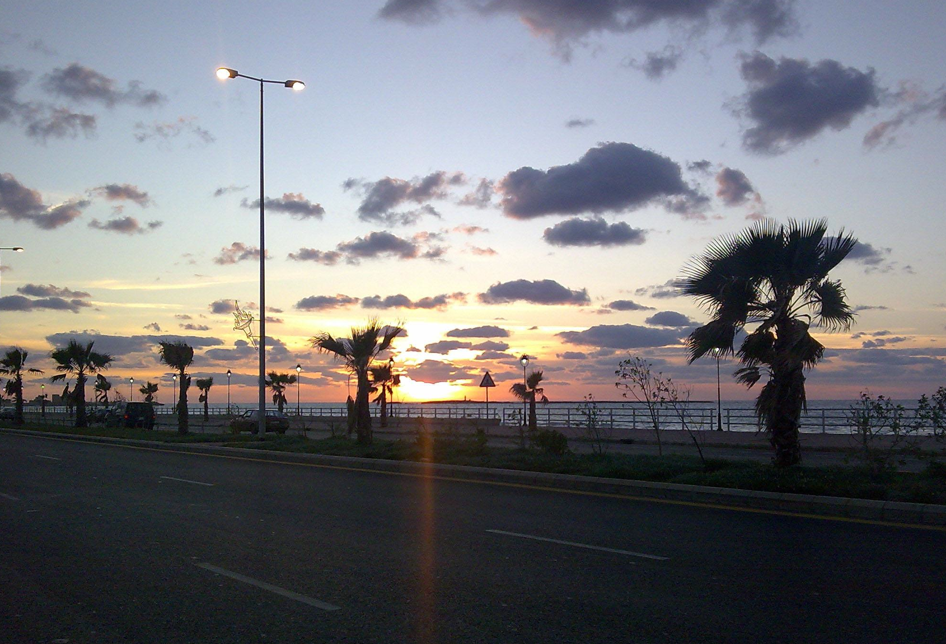 The entrance to Sidon from the north is on a wide divided highway lined with palm trees. As you approach, the landmark Crusader Sea Castle and modern port installations are immediately visible, explains lebanon.com. The busy main street is full of small shops of every kind, including patisseries, whose oriental delicacies are stacked in little pyramids.

Sidon is famous for a variety of local sweets which you can watch being made in the old souk or in shops on the main street. 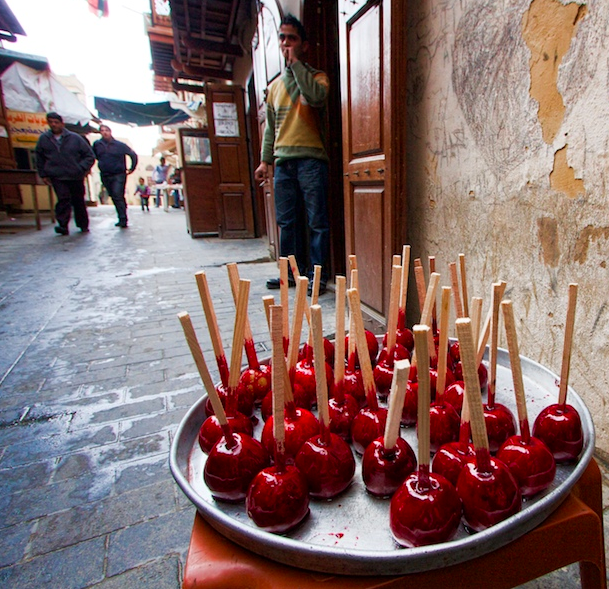 The particular specialty of Sidon is known as “senioura,” a delicious crumbly cookie.

A growing city with a modern seaport, Sidon is the South’s commercial and financial center. In prewar days it was a terminal and a refinery for Tapline, and now its huge storage tanks are used for the import and local distribution of fuel. The commercial port, the third largest in Lebanon, accommodates small freighters. Sidon is also the seat of government for South Lebanon.

The old section of modern Sidon developed at the end of the Crusader period. Here the visitor will enjoy wandering along the sea front to the Crusader Sea Castle, and looking around the old souks, “khans” (caravansaries) and other medieval remnants.

Is a fortress built by the Crusaders in the early 13th century on a small island connected to the mainland by a causeway. A climb to the top leads to the roof where there is a good view of the port and the old part of the city.
Today the castle consists primarily of two towers connected by a wall. In the outer walls Roman columns were used as horizontal reinforcements, a feature often seen in fortifications built on or near former Roman sites. The west tower is the better preserved of the two.

Old prints of the fortress show it to be one of great beauty, but little remains of the embellishments that once decorated its ramparts. After the fall of Acre to the Mamlukes all the sea castles were destroyed to prevent the Crusaders from re-establishing footholds on the coast.

On the waterfront next to the castle offers good food and refreshment. Situated in a restored medieval building, the Resthouse is set in a landscaped seaside terrace.
The interior has vaulted ceilings and medieval decor. There is also a fine patio with a fountain. Open from noon until 4 PM and from 7 PM -12 PM.

3 – The Souks
Between the Sea Castle and the Castle of
St. Louis stretches the old town. Not far from the Sea Castle is the picturesque vaulted souk of Sidon, where workmen still ply their trades.
On the edge of the souk is a traditional coffee house where male clientele meet to smoke the narguileh (water pipe) and drink Turkish coffee. Fishermen sell their latest catch at the market near the port not far from the souk’s entrance. 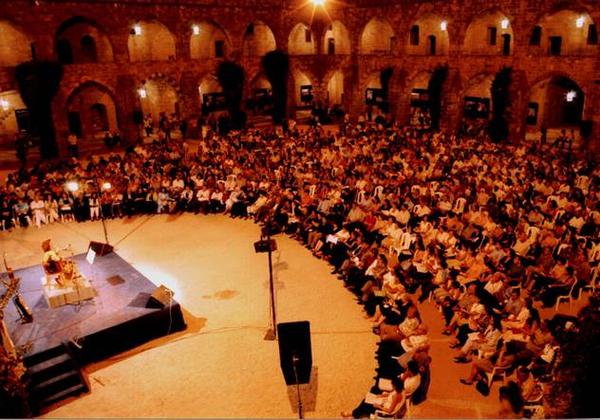 4 – Khan El Franj
The Khan El Franj is one of the many khans or caravansaries built by Fakhreddine II for merchants and goods. This is a typical khan with a large rectangular courtyard and a central fountain surrounded by covered galleries.
The center of economic activity for the city in the 19th century, the khan also housed the French consulate. Today it is being renovated to serve as Sidon’s cultural center.

South of the souk on the way to the Castle of St. Louis, is the Great Mosque, formerly the Church of St. John of the Hospitalers. The four walls of this rectangular building (recently restored to their natural beauty) date to the 13th century.

Originally a fortress-like Crusader compound with its own chapel, it is still an imposing structure, especially viewed from the seaside.

The Castle of St. Louis was erected on the emplacement of a Fatimid fortress during the Crusade led by French King Louis IX, popularly known as St. Louis.
Built in the mid-13th century, the present state of the castle makes it easy to observe various stages of the restoration carried out in the Mamluke era, particularly work done in the 17th century by Emir Fakhreddine II. At the foot of the hill are a dozen or so Roman columns scattered on the ground.

7 – Murex Hill
To the south of the citadel is a mound of debris called Murex Hill. This artificial hill (100 meters long and 50 meters high) was formed by the accumulation of refuse from the purple dye factories of Phoenician times. Mosaic tiling found at the top of the mound suggests that Roman buildings were erected there. The hill today is covered by houses and buildings as well as a cemetery.
Broken murex shells can still be seen on the lower part of the hill, but because of extensive construction, it is increasingly inaccessible to the public.

8 – Old Ports
The ancient Egyptian Port, so called because it faced south towards Egypt, is located opposite the Castle of St. Louis and Murex Hill. An active harbor in Phoenician times, it has silted up over the centuries. Today the north channel harbor is used only for local fishing boats because Fakhreddine filled it in during the 17th century to deny entry to the Turkish fleet. What remains of this harbor goes back to the Roman era. 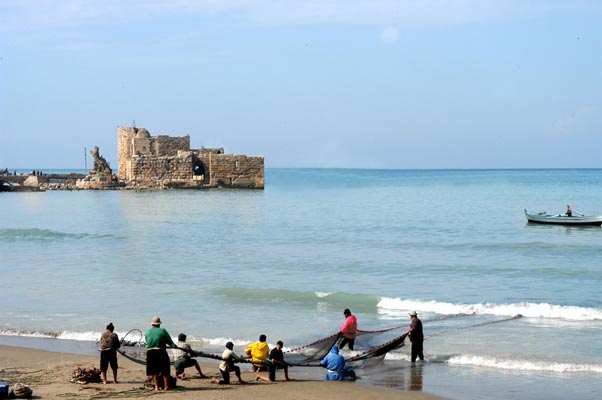 9- The Necropoli of Sidon

The three main necropoli of Sidon lie beyond the ancient city limits and were in use until the late Roman and early Christian eras. These are the necropolis of Magharat Abloun, the royal necropolis of Ayaa below the present village of Helalie, and the necropolis of Ain el Helwe to the southeast. Located in what are now residential areas, no excavations are in progress at any of these sites.
South of the city an ancient cemetery known as Dekerman was used until this century. It is also an archaeological site, with an extensive collection of objects, mostly sarcophagi and tombs in situ, as well as fragments, inscriptions and sculptures.
A number of circular Chalcolithic (4000 B.C.) foundations can also be seen here.

10- The Temple of Eshmoun
At the right of the bridge on the Awali River just before reaching Sidon, is a spot known as “Bustan el Sheikh,” site of the Temple of Eshmoun. This important monument goes back to the Persian period (6th century B.C.) when Sidon was at its zenith.
As the god of healing, Eshmoun was identified with Asklepios, the Greek god of medical arts. Each Phoenician city state had its own gods, and Eshmoun was one of the favorite of Sidon during its golden age, the 6th and the 5th centuries B.C. Additions were made to the temple in subsequent eras and it remained a sacred shrine and place of pilgrimage well into the first centuries A.D.

Have you been? Any special feature of this place that you can share with us?