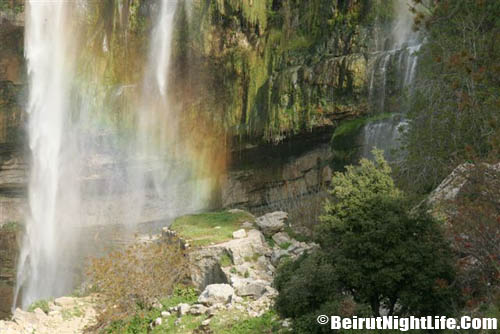 Jezzine, considered one of the main tourism attractions in Southern Lebanon with its spectacular landscape and its 40m high waterfalls. The town is located on the slopes of Tumat Niha and is the center of pine forests, vineyards and orchards making it a precious natural jewel on the borders of Lebanon.

Jezzine is a historical town, where an ancient sarcophagus, Crusader remains as well as ruins of an mosque. Jezzine is known for a number of historical monuments including The Saint Antoine Convent, belonging to the Antoine order (1774), The Serail (1898) and The Farid Serhal Palace, a monumental building in the oriental style where an impressive collection of valuable antiquities is found.

Jezzine is the center of the Caza, where several public administrations, banks, hotels, restaurants and amusement centers are found. The town is famous for its traditional cutlery and daggers. The tourist can also visit the fish farms, which are important to the economic cycle of Jezzine’.

The cuisine is another success story in Jezzine restaurants. The tradition began over a hundred years ago with a few simple riverside cafes. There you can enjoy the traditional Lebanese mezze as it is served nowhere else. To add to the sense of timelessness, delicious mountain bread is baked before your eyes and a man in the Lebanese traditional outfit serving the fresh coffee.

Most villages of Jezzine area are considered to be summer resorts. Five kilometers from Jezzine lay Bkassin, a lovely quiet village. From there, continue to Binwati, 7 km from Jezzine, and Nabi Misha is notable for its fine stone work. In the village of Mashmushe, which was the first seat of the Maronite bishopric in the area, you can visit the beautiful 18th century monastery.

On the main Jezzine -Sidon road are the villages of Homsiye and Rum. Three kilometers west of Rum lay Anan, an old Byzantine settlement, famous for its artificial lake, fed by the Litani River through a 16 km long tunnel. West of Anan is a small Crusader fort, known as Abi al Hasan Citadel located on an 80m high promontory.

Kfarhuna, Aramta, Rihan, Ayshie and al-Jarmak. West of Aramta is the villages of Mallikh, Lwayze and Jernaya, it’s like a treasure box filled with jewels made by the beautiful nature in Lebanon.