Waking up in your own time after a long week at work and looking forward to a smooth day that doesn’t need much planning? Only some twenty–five minutes away fromBeirutwith straightforward road signs, Deir El Qamar makes for a charming week-end get-away, with its breathtaking mountain views, its homey restaurants, and romantic architecture. Once arrived, it is simple to park on the main roads, and have a relaxing wander around town, most parts of which are easily accessible by foot.

You can start off with what visitors and locals sometimes describe as the best man’ouche in the country, man’ouchet ‘beit el eter’, made with zaatar baladeh! As one of our rare towns that have preserved a quaint old style, you can set to go where your heart takes you by following meandering alleyways. They will lead you to small period Lebanese stone homes with bountiful gardens, sudden picturesque views, and authentic coffee places, restaurants, or crafts shops. 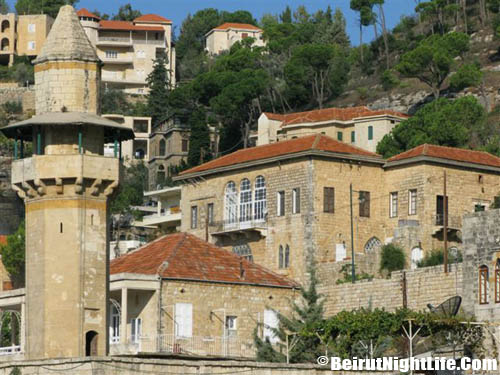 You can begin your promenade at the Dany Chamoun square, previously known as ‘Midane’, where equestrian competitions were held in the 16th century. Have a sip of fresh cool spring water here from the 19th century fountain sourced from the Shalout. Delve into a bit of history all around the square: You will find sites to pop in and out of such as the Palace of the Emir Younes Maan, the Kaisaryyeh built by Emile Fakhreddine II, theBazMuseum, the Kharj, theEmirFakreddineIIPalace, and several other historical landmarks. You can have a coffee break at ‘Al Midan’ on the square. Notice that even the Municipality or theFrenchCulturalCenter are located in Palaces worth visiting. Deir El Qamar, the number one touristic town inLebanon, has a very rich historical heritage.

Also, spiral up the little hills to look down on the town and take a memorable shot of red roofs and green surroundings. The Deir El Qamar festival attracts visitors with entertaining programs. Many activities have been establishing themselves such as horseback riding, quad, ‘petanque’ tournaments with other towns, or beautiful walks. Stay late to dine in old Deir El Qamar’s alleyways with itsmany restaurants underneath the palaces.

Until the end of the 18th century, Lebanese Governors resided in Deir El Qamar. Today, several trendy boutique hotels are being built, to welcome the many visitors fromLebanon and around the world.

You can find easy directions on how to get there from Beirut on several websites, for example on Deirelqamar.com :

1. Via the south bound coastal highway. Turn right at Damour where sign reads DeirElQamar and Beiteddine – Distance from Beirut 37 Kms.