Super Bowl: Beyonce and Destiny’s Child amaze the world with sexy routine for half time show 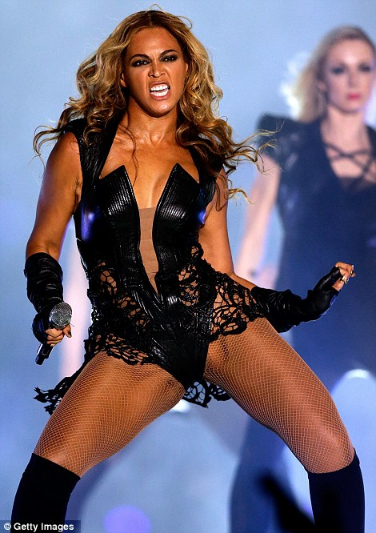 It was without doubt the best Super Bowl half time show ever.

It had everything from fireworks to actual fire and most importantly – Beyonce.

She opened her relatively short set with the first few lines of Love On Top before singing a medley of her most popular songs including Crazy In Love and End Of Time.

In a leather leotard, she tore off her jacket and threw it into the crowd. Which is definitely the best souvenir of all time.

The mum-of-one actually looked hotter than the fire surrounding her, electrifying 70,000 fans in the stadium and more than 100 million telly viewers.

The tight costume revealed her incredibly toned stomach and cleavage courtesy of a plunging open v-neck.

Beyonce has facedheavy criticism for miming at President Obama’s inauguration but her critics will have been choking on humble pie after this show.

Proving there’s nobody else who can do it better, she belted out pitch-perfect vocals in the center of the sold-out stadium.

And as if the cheers weren’t already deafening enough, after finishing a snippet of Baby Boy the stage opened up and the finale was unveiled.

The trio reeled off everyone’s favourite tunes Bootylicious and Independent Women but the best was yet to come, amazingly.

It was of course, when the DC girls performed Single Ladies – complete with a full routine.

Bey capped off all of the excitement with Halo and telling the world: “Thank you so much, god bless y’all.”

Shortly after the set, the stadium went into a complete blackout – perhaps the Superdome’s owners hadn’t paid their electricity Bills, Bills, Bills.

If anyone was doubting whether or not to stay up into the early hours and watch a sport more complicated than advanced level sudoku – this made it worthwhile.

No, Beyonce. THANK YOU.

The hilarious and amazing faces of Beyonce during her incredible Super Bowl performance, picture special

During an official press conference for the Super Bowl XLVII earlier in the week, Beyonce confessed that yes, she did in fact lip-sync Star Spangled Banner in front of the Prez and hundreds of millions of viewers.

But not before proving exactly why she’s so highly-rated. Beyonce belted out an impromptu rendition of the exact same song – LIVE .

The room of media, photographers and sponsors were left completely stunned when she finished by thanking everyone in the room before asking, “Any questions?”

“I am a perfectionist,” she explained when asked about the lip-sync scandal, saying that she chose to use “a backing track” due to a lack of sound check and the pressure surrounding the event.

“I’m very proud of my performance,” she added.

“I will absolutely be singing live,” she said of the Super Bowl performance. “I am well-rehearsed. This is what I was born to do.”

Bring on The Mrs Carter Show!