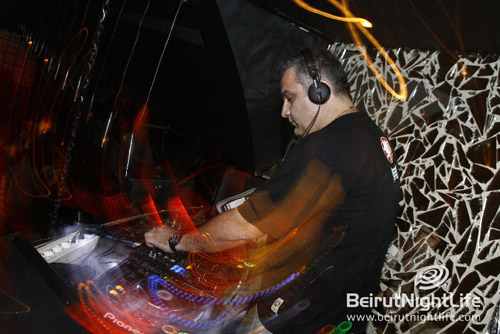 Said Mrad hit the decks at L-Club in one of his world wide successful gigs. Clubbers at L-Club enjoyed the oriental beats of the renowned DJ and danced on the newest releases till the early hours of morning.

SAID MRAD is a music lover,born in lebanon,and his career in the music scenes dates back to 1990 when he first started as DJ,playing in the most famous nightclubs around lebanon such as JET SET,OPERA,and GOTHA.Through the years,he acquired an admirable sense for music,and became well known as “one of the best djs in the middle east”.

Since his success in Europe ,the 2 companies lunched his album worldwide and he has been touring the globe since 2002.

He played in several famous clubs in europe such as,”MILLENIUM in MARSEILLE”,”BUDHA-BAR,BARIO LATINO,NIRVANA LOUNGE in PARIS, COLONIAL in THESSALONIKI-GREECE,PRIVATE BEACH in IBIZA,GURU-BAR in AYIA NAPA,LITTLE BUDDHA-BAR in SHARM EL SHEIKH,as well as the most famous clubs in DUBAI,EGYPT,JORDAN and CYPRUSS.