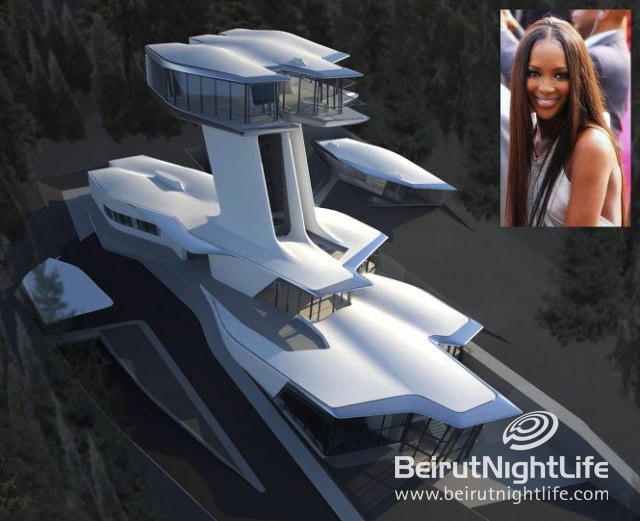 Supermodel Naomi Campbell is a lucky girl in many ways, and the fact that her Russian billionaire boyfriend Vladislav Doronin, real estate entrepreneur aka the Donald Trump of Russia, is reportedly building a new home for her is just another cherry on the cake! Miss Campbell is being treated to a futuristic mansion that looks like a docked spaceship in Moscow’s A-List suburban area Rublyovka, designed by accomplished architect Zaha Hadid who is famous for the opera house in Guangzhou, Roca Gallery, and the Aquatics Center in London amongst many others.

The extraordinary 2,650 square meter home is named Capital Hill Residence, and centers around two 22-meter-high towers that resemble the mechanical alien invaders from the War of the Worlds.

Using a mixture of modern technologies and organic form, the eco-style abode appears as a cluster of shiny pods nestled amidst a private surrounding of mature pine and birch trees, located on the north-face hillside in Barvikha.

The lower quarters of the dwelling enjoys the cozy naturalistic feeling of merging with the hillside, whilst the upper sections float higher than the treetops to offer dynamic views across the forest.

The design aesthetic of this space-age dwelling was influenced by the legendary work of Antonio Gaudi, who is known for his rejection of straight lines in his architecture, and who prolifically used glass and wood for interior decoration.

The inner part of the house is planned in Eco-style. The creator was roused by the work of unbelievable Barcelona draftsman Antonio Gaudi, who did not affirm straight lines and would give anything to utilize wood and glass within inner part embellishment. The inside is as advanced as the outside, with immense glass boards, smooth bends all over and to great degree tall top sides. It appears as though it might be an instrument to take over the universe, both on the outer surface and the inner part.