Lady Gaga Spanked in a Bathtub 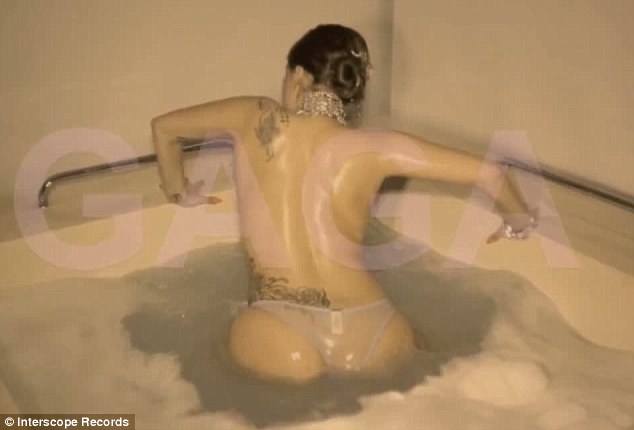 The first trailer for her new song Cake saw Lady Gaga being spanked in a bathtub, so it was only a sign of things to come.

In the second trailer for the track, the New Yorker is seen writhing around in butter cream cake mixture and sucking it off her fingers.

Covered in all that mess, it isn’t surprising the singer needs a good bath, so the cameras follow her into the bathroom for a soaking.

In the 20 second clip, Gaga is seen rolling around in the mixture while wearing pale pink underwear and high heels, sometimes picking up some of eat suggestively.

At one point, she sits up and rubs her backside in the sticky mess.

She then strips down to just a G-string as she gets in the bath to wash it off – while having a good old dance in the water.

In a fleeting shot, Gaga is seen bending over in the bath as she spanked by a brunette, as another woman looks on.

Then in another sepia shot, the singer is seen attempting ‘twerking’, a popular dance in hip-hop culture, in a skimpy T-shirt, G-string and heels in a rehearsal studio.

As she shimmies and shakes, she admires her own backside in a mirror.

The single is expected to be on Gaga’s forthcoming album Artpop, which is scheduled for release in early 2013.