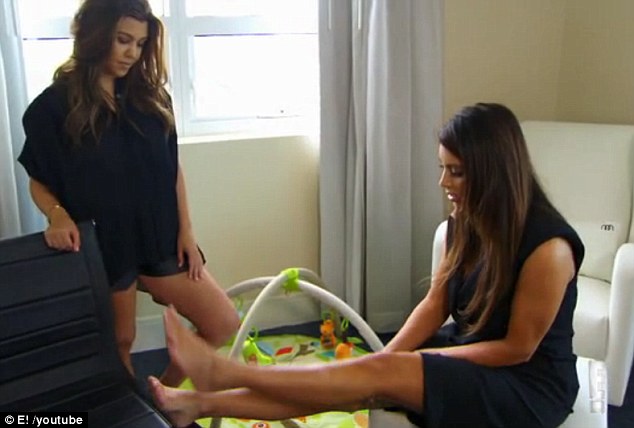 When Kim Kardashian’s psoriasis failed to clear up after using numerous lotion and potions, the reality star turned to her sister Kourtney for help.

And in a new outrageous episode of the pair’s reality show, Kourtney & Kim Take Miami, the duo reveal their home remedy for the 32-year-old’s skin condition.

In a promotional clip for this Sunday’s show, Kim is seen yelping as Kourtney squirts breast milk directly from her chest and onto her sister’s leg.

The reality star, who is currently pregnant with her first child with rapper Kanye West, is seen screeching as Kourtney leans over her to drip the milk on her psoriasis spots.

Kim had used mother-of-two Kourtney’s breast milk before after reading online that it could help clear up the lesions on her legs.

However, she wasn’t quite expecting it to come this time, as she puts it, ‘fresh off the boob.’

At the beginning of the clip, the pair are seen in their Miami house, where Kim is musing over her psoriasis spots.

‘These spots have been, like, really continuous… for like six months they haven’t gone away…so the fact that they’re white is a good sign,’ she says. ‘So I just want to keep on trying it.’

Obliging Kourtney immediately comes to the rescue, telling Kim to lean back and relax.

It is then when Kourtney takes one of her breasts out of her bra and squirts the milk over Kim’s legs.

‘Are you serious? I don’t want to do this. Never mind!’ Kim yelps. ‘Are you really going to do this? Ew! Ew! That is so disgusting that you can just squeeze that and have it come out.’

Kim then instructs Kourtney to rub it into her leg.

Breast milk is said to be a known natural healing aid for psoriasis.

Some medical practitioners advise pregnant women to bathe their own nipples in freshly expressed milk when they suffer from the condition whilst breast-feeding.

While Kourtney shared on purpose, Kim did not do the same with her big sister’s secrets in another episode of the show.

In a clip from a new episode Kourtney & Kim Take Miami, obtained by Radaronline, Kourtney complains to her sister Kim, that Scott is being an absentee father who would rather hang out with his “buddies” than with her and their two young children.

For reasons that are not explained, Kim types the conversation down and accidentally emails it to Scott.

An angry Scott confronts the mother of her ‘I’m the most hands-on father.’