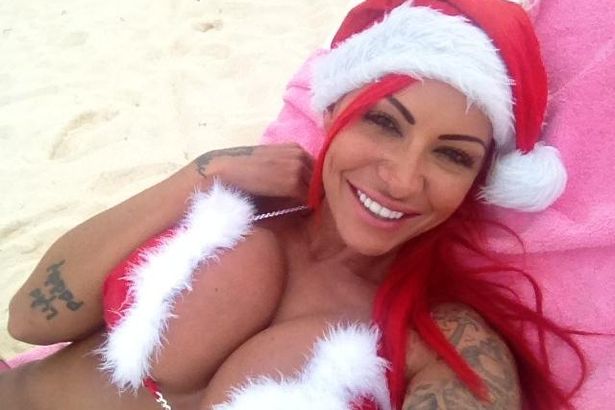 She celebrated her birthday on the weekend by posting dozens of bikini snaps while sunning herself on the beach in Barbados.

And while Jodie Marsh hasn’t shown any signs of slowing down when it comes to taking photos of her boobs, she turned into a wildlife superhero last night.

Someone probably managed to wrestle her camera phone out of her hands before Jodie helped rescue baby turtles on the exotic island.

The model turned bodybuilder uploaded this video between various nearly-naked pics with the caption: ‘Oh yes! Here’s a better video of me helping to rescue baby turtles on the beach in Barbados last night.’

She added: ‘Collecting baby turtles while they hatch. Most amazing experience ever!’

Jodie confessed that she’s a bit sad being alone and keeping herself occupied by changing swimwear and modelling the revealing costumes to her fans on Twitter.

She wrote: ‘Amusing myself cos I’m all alone in Barbados :-(‘

Before explaining: ‘This one [bikini] changes colour but you can’t see it too well in pics. Goes from pink to coral to gold x’

We’re beginning to wonder if Jodie Marsh actually has any proper clothes.

Although to be fair she is in a very hot place (Barbados), on the beach and as it’s Christmas AND the anniversary of her birth, it’s only right she wears her birthday suit –  she was born in a bikini.

And that is exactly what she’s doing. While the rest of us shiver, battle through adverse weather conditions and worry about how we’re ever going to get enough taxis into town on New Years Eve (and get drunk), Jodie’s doing bog all.

Yes, we are insanely jealous.