The Jeita Grotto is a compound of interconnected karstic limestone caves in Lebanon located 18 kilometres north of Beirut in the Valley of Nahr al-Kalb. The complex consists of two separate caves.

The lower cave was inhabited in prehistoric times, it was rediscovered in 1836 by Reverend William Thomson; it can only be visited by boat since it channels an underground river which provides fresh drinking water for the inhabitants of Beirut.

The upper cave was discovered in 1958 by Lebanese speleologists, it is located 60 metres above the lower cave and has been accommodated with an access tunnel and a series of walkways to enable tourists visit it safely without disturbing the natural landscape. The upper cave houses the world’s largest stalactite and is made of a series of chambers the largest of which has a maximum height of 120 metres.

The Jeita Grotto which is managed by the German, Beirut based private firm MAPAS is a candidate in the New 7 Wonders of Nature competition.[4] 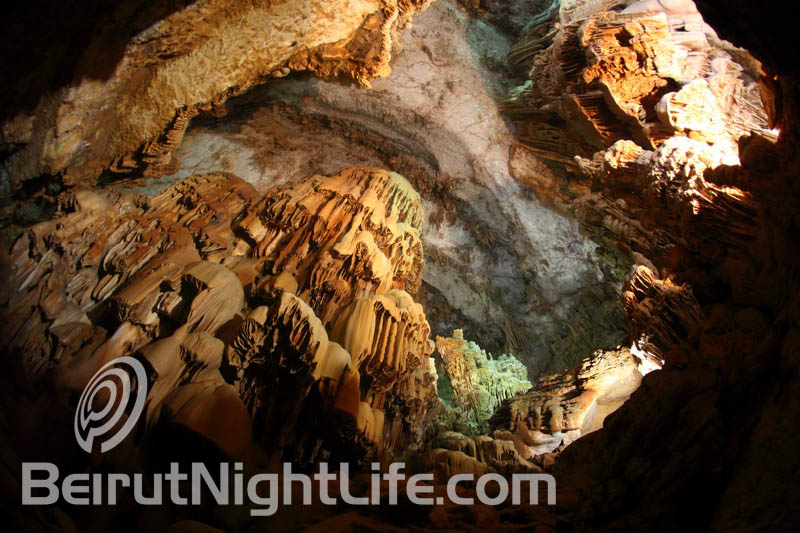 History
The modern discovery of the underground river of Jeita in 1836 is credited to Reverend William Thomson (an American missionary) who ventured some 50 metres  into the cave. Reaching the underground river, he fired a shot from his gun and the resulting echoes convinced him that he had found a cavern of major importance.
In 1873 W.J. Maxwell and H.G. Huxley, engineers with the Beirut Water Company, and their friend Reverend Daniel Bliss, president of the Syrian Protestant College (later the American University of Beirut) explored these caverns. In two expeditions carried out in 1873 and 1874 they penetrated 1,060 metres (3,500 ft) into the grotto which is the principal source of the Nahr el-Kalb that supplies Beirut with water. They were impeded by “Hell’s Rapids” torrents which break onto razor sharp rocks. Dr. Bliss, Mr. Maxwell and the other engineers recorded their names and the year on “Maxwell’s Column”, a great limestone pillar some 625 metres (2,050 ft) from the entrance. About 200 metres (660 ft) further on, in the so-called “Pantheon”, they wrote their names and details of the expedition on paper, sealed it in a bottle and placed it on top of a stalagmite. The lime-impregnated water has since covered the bottle with a thin white film, permanently fixing it to the stone.
Between 1892 and 1940 further expeditions were carried out by English, American and French explorers. Their expeditions brought them to a depth of 1,750 metres.
Since the 1940s, Lebanese explorers, notably the members of the Speleo-Club of Lebanon founded in 1951 by the first Lebanese speleologist Lionel Ghorra, have pushed even deeper into the Jeita grotto. Their expeditions revealed a great underground system which is now known to an overall length of nearly 9 kilometres.

In 1958 the lower caverns were opened to the public, meanwhile exploration was still underway mainly by the Lebanese Caving Club which led to the discovery of the elevated dry branch of the grotto later referred to as the upper galleries.

In 1962, the Spéléo Club contributed to a study of the upper galleries aiming to provide a tunnel course which was to be dug for touristic development purposes; this tunnel was begun in 1968.

In 1969, a concert with electronic music by the French composer Francois Bayle was held in the cave to celebrate the inauguration of the upper galleries. This event was organized by the Lebanese artist and sculptor Ghassan Klink.Other cultural events have taken place in this unusual surrounding, including a concert by the world acknowledged German composer Karlheinz Stockhausen in November 1969.

The caverns closed to the public due to the Lebanese civil war in 1978[7] both tunnels leading to the lower and upper galleries were used to store munitions, the outside buildings for military purposes. The caves reopened in 1995 and remain one of the country’s key natural attractions.

Upper cave
The Jeita upper cave has an overall length of 2,130 metres of which only 750 metres are accessible to visitors via a specially conceived walkway; access to the remainder of the cave was restricted to prevent ecological damage which may occur due to the flocking tourists. The upper cave contains a great concentration of a variety of crystallized formations such as stalactites, stalagmites, columns, mushrooms, ponds, curtains and draperies.The upper gallery is famous for its formations, lit by an effective lighting system. It is entered through a 117 metres  long concrete tunnel. The part accessible by visitors has three huge chambers. The first is called White Chamber, the second Red Chamber, due to the color of the formations. White dripstones are pure calcite without defilement, the red color is given by iron oxide (rust) in small amounts. In Lebanon iron oxide has a red color instead of the brown beige color which is common in northern countries. The reason is a different chemical reaction caused by the high temperature which produces a different kind of iron oxide. The White Chamber is medium sized, but has the most impressive formations of the cave. The Red Chamber is up to 106 metres  high, and 30 metres  to 50 metres  wide. The third chamber is the biggest of all three chambers and has a height of more than 120 metres. The longest stalactite in the world is located in Jeita’s White Chamber; it measures 8.2 metres long

Lower cave
The lower gallery which has an overall length of 6,200 metres  is located 60 metres  below the upper gallery. It is traversed by a smooth underwater river and a lake. The river is broken up by several small cataracts and rapids. The lower cave’s “Thompson’s Cavern”, is a massive hall with impressive speleothems such as the Eagle Obelisk stalagmite. Other halls in the lower gallery include the Pantheon, Grand Chaos and Shangri-laVisitors are transported in the lower gallery by electric boats for a distance of 500 metres  In winter the lower level is closed, when the water level is too high.

Other awards and certificates include:

* 2000 Certificate of Recognition from “Sukleen”-Lebanon for its sorting and recycling campaign.
* 2000 Appreciation from the Arab Musical Association”.
* 1998 “Best Tourism Project” from the Lebanese Ministry of Tourism.
* 1997 International Environmental Award from the German Travel Association (DRV).[25]