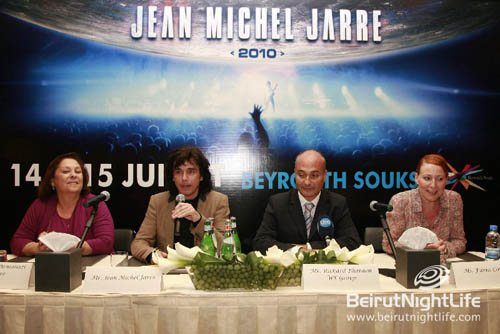 Jean Michel Jarre wished to pay tribute to this legendary, literary giant in giving the title of « 2010 » to his world tour which debuted six months ago to full houses in the United Kingdom, Norway, Finland, Sweden, Holland, Poland…and to audiences of all generations. One word welcomed him on the road: Pioneer.

Today, Jean Michel Jarre is synonymous with Myth. Oxygene, Equinoxe, Magnetic Fields, but also Deserted Palace or Zoolook imposed a visionary genre of music of which we can find influences of amongst many artists, from Air to Daft Punk, Moby or The Chemical Brothers.

His concerts are also part of the Jarre myth. Those who have had the opportunity to witness these exceptional events that have marked his career, from China to Houston, London Docklands to the Great Pyramids of Egypt…will forever remember these extraordinary events.

To partake in this incredible experience, Jarre has decided to revisit his « all-in-one-show » concept, by integrating the very latest technology in sound, light and special effects for an outstanding result.

A unique opportunity to live, or relive, an extraordinary moment.

Jean Michel Jarre first came to international fame in 1977 with his number one hit album, « OXYGENE » which went on to sell over 18 million copies worldwide.

An extraordinary destiny, that of Jean Michel Jarre’s, following in the path of another, that of his father, Maurice Jarre, composer of some of the most famous and popular soundtracks of legendary Hollywood films
(Doctor Zivago, Laurence of Arabia…) : two musicians, two celebrities, father and son, renowned worldwide for their individual, singular talent.

Jean Michel Jarre, a pioneer in his field, has largely contributed to the fastest growing musical revolution of the 20th century, electronic music : conceiving music in terms of sounds rather than only in terms of notes, and thus allowing the composer to become his own craftsman.

Having followed formal studies of harmony and counterpoint at the Conservatoire de Paris, he was inspired to reinvent music at its core, with his own singular vision, deploying the technology and tools of his epoch. This pioneering approach gave birth to worldwide hit albums such as “OXYGENE”, “EQUINOXE”, MAGNETIC FIELDS”, “ZOOLOOK”, “RENDEZ-VOUS”, “WAITING FOR COUSTEAU”….over 80 million albums sold to date.

Following through with his revolution in music, he also conceived a brand-new genre and format of concerts ; breaking away from the traditional theatre and arena context, Jarre brought his music and vision outdoors to the masses. Often free and open-to-all, these state-of-the-art concert-spectaculars showcase the natural or urban environment in which they are performed – a truly singular sonic and visual “land-art” event, conceived and performed on a unique scale for a one-off experience.

They take place in exceptional settings, marking extra-ordinary contexts: From post-Mao’s Red China to that of today, from Texas in collaboration with NASA and the tragedy of Challenger, to the concert welcoming His Holiness Pope John-Paul II to the city of Lyon in France during, historically, one of the country’s most vicious waves of terrorism and coinciding with fatal predictions delivered by Nostradamus, from the
saga of the Docklands with players such as HRH Diana Princess of Wales, colourful tycoon and media mogul Robert Maxwell, not withstanding the atrocious weather conditions…

From Poland for Solidarnosc at the initiative of Nobel Peace Laureate, Lech Walesa, to Paris for the environmental statement voiced by Jarre in the name of Jacques-Yves Cousteau, to the Great Pyramids of Egypt welcoming the New Millennium, to the absolute record live audience of 3.5 million in Moscow, and his ongoing engagement to the United Nations via UNESCO as Ambassador and spokesperson for Environment and Education….the well-travelled path of this visionary musician and humanitarian is certainly most unique : an exceptional log-book retracing his and our epoch on so many levels.

2009-2010 sees Jarre booked for his first ever world tour. Over 100 dates where he offers a rare opportunity to share his talent live – to date, the European arenas played to full-house, have revealed a most cross-over audience : young amateurs of techno-electro, white-collar professionals, the high-tech & audiophile 40-somethings, the original Oxygene generation…and women of all ages who nurture an ongoing crush for the suave Frenchman.

But if Jarre’s music is so universal, it is also because it is in a timeless class of its own, created by a man who has always followed his own vision and expression far from the passing trends, driven by an immense curiosity for the world and universe in which we evolve : the wonders & sounds of nature, the awareness of preserving our planet, the politics and sociology of our times, the rich variety of culture and people across the continents, the fantastic evolution of technology in our living generation, how music is truly a universal language whatever the age, gender, culture or class…These themes that have always driven Jarre, and that are the foundations of his successful and ongoing singular career.