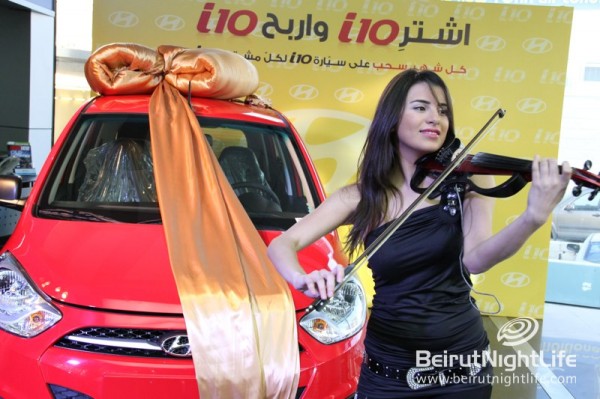 To celebrate the launching of its new 2012 Hyundai i10 promotional campaign, Century Motor Company S.A.L. held its first i10 give-away ceremony in its Zalka showroom, with guests from the media and Hyundai’s customers.

The promotional campaign offers one free i10 car each month throughout 2012. Every i10 buyer will have their name entered into the draw during the month during which the car is purchased. As a prize, the winner will either receive yet another i10 or refund it and receive a cash price of the car’s value.

The ceremony began with live entertainment, performed by the violinist Vanessa, followed by two radio station road shows and a cocktail reception. The draw took place under the supervision of the Lebanese National Lottery Association. The lucky winner was Quality Price, a company that specializes in the distribution of medical and pharmaceutical products. Mr. Walid Rasamny, Chairman of the Board of Century Motor Company, delivered the prize to Mr. Joe Andraos, the General Manager of Quality Price, on behalf of the company.

To conclude the ceremony, all the guests got a sneak preview of Hyundai’s new models that are yet to be launched in the Lebanese market.