Beirut is in the Eye of the Beholder: May Khalil, Turning Tragedy into Triumph 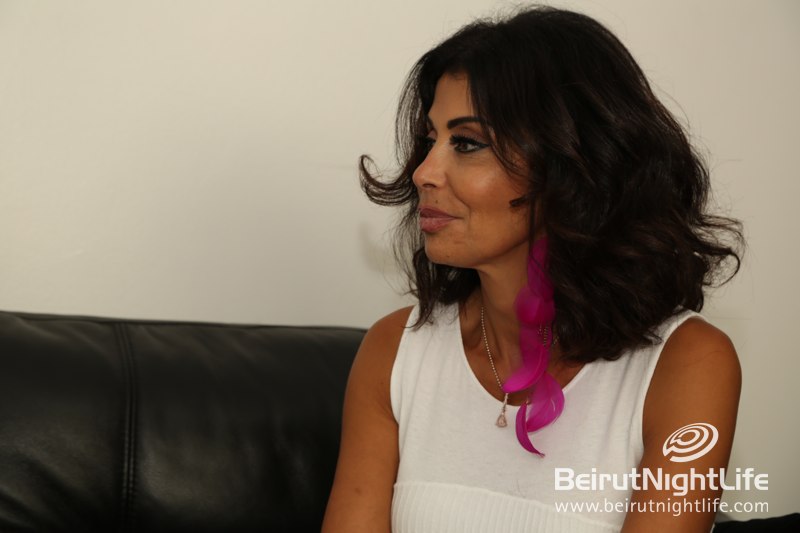 All of Lebanon has heard of the Beirut Marathon, but not everyone knows how it began. Many have seen the gracious lady who hosts it year after year, but not all know her story. Recently she’s been in the news a lot, from the official announcement of the Beirut Marathon on August 29, 2013 to the TED talk she gave which was published online a couple of weeks ago. She is May Khalil, and though she is always seen smiling, her life hasn’t always been a bundle of laughs.

This year the inspiring leader was invited to give a talk at the prestigious TED Global in Edinburgh, where she told the against-all-odds story of how she was hit by a bus while doing something she loved—running—ended up in a coma, stayed in hospital for 2 years and underwent 36 operations to be able to walk again. One may think that to live through the ordeal is triumph enough, but for May Khalil it was only the beginning. Her second wind brought something to the country that wasn’t seen before and has become a beacon of hope amid the turmoil: The Beirut Marathon.

I had the pleasure of sitting down with the Beirut Marathon Association founder just after the official launch of this year’s marathon. Perfectly coiffed, with a trendy pink feather earring and a brilliant smile Mrs. May welcomed me into her office at the BMA headquarters in Hazmieh for a chat about the marathon, the association, the TED talk, and more. 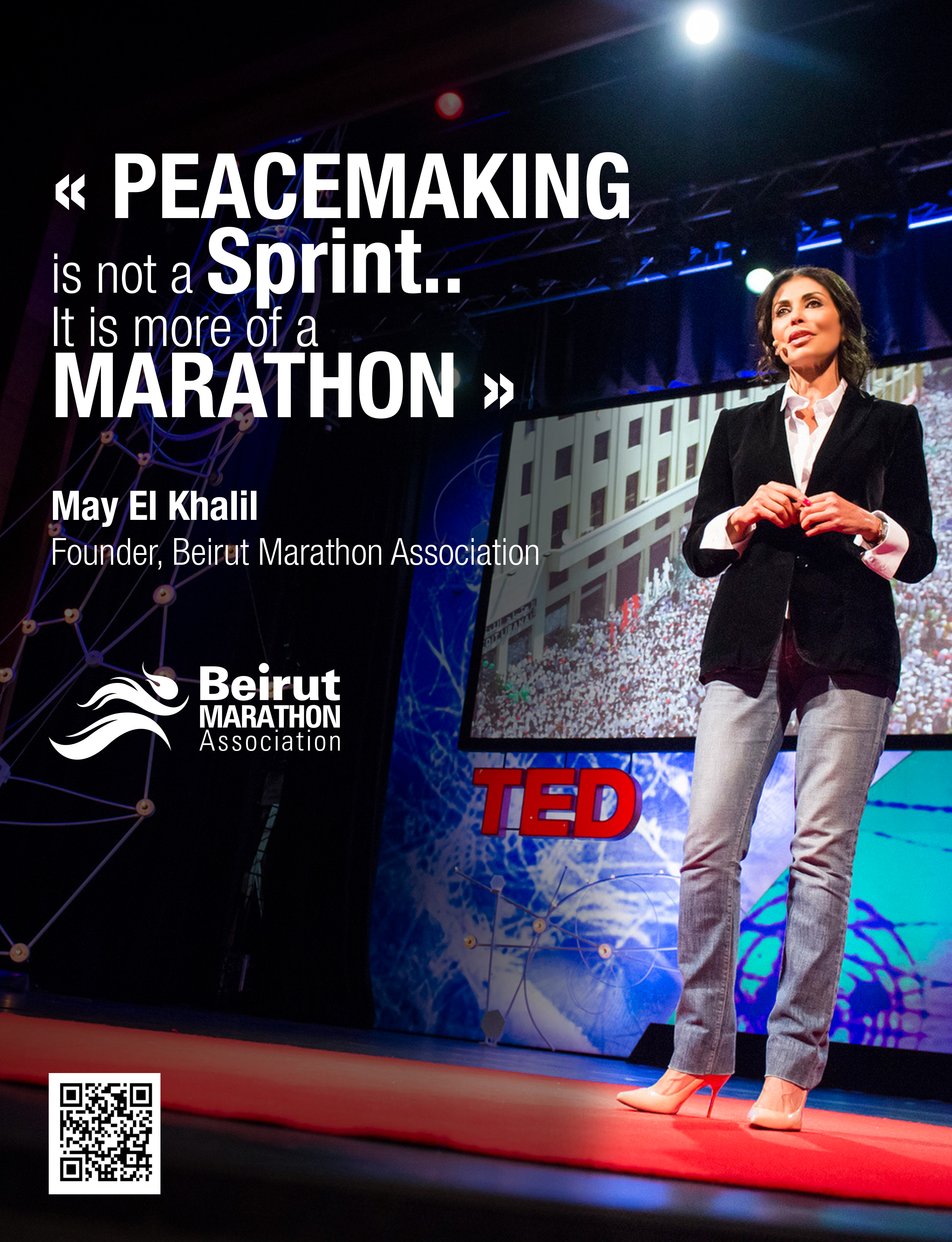 This year the marathon turns a decade old, and it’s partnered with the Banque Du Liban. The marathon launch on Thursday was huge, with a turnout of 500 people, and the stretch of Hamra Street where the bank lies was closed off and elaborately decorated with Lebanese flats.

“The amazing thing is that even with the problems that people are living with, when it comes to the call of the Beirut Marathon they come and support it because they feel our events are about Lebanon, promoting Lebanon through the power the sports. We’ve been able to place Lebanon on the international map,” she says.

Registration has already started for the marathon online, which will be held November 10 this year under the theme: Run for Lebanon. Mrs. May says, “through the power of sports we feel that we can definitely continue brining people together irrespective of background, color, or beliefs. People have been supporting us since the very beginning, since 2003, because they’ve noticed that the marathon is becoming a platform for them to show the world the true colors of Lebanon and who the Lebanese really are.”

This year’s marathon combines the two identities of BMA and the BDL, Lebanon’s central bank. When guests arrived they were each given a numbered square and asked to place it on a wall in the right place. By the end of then right the puzzle revealed a giant, vintage Lebanese Lira note with the BMA logo at the center.

Mrs. May says the partnership with BDL is “assurance that our event is becoming a real national event,” adding, “I’m really grateful for that because they are putting their trust in us as well. We’ve had incredible support by the whole government and we are really blessed to have such support from everyone.” 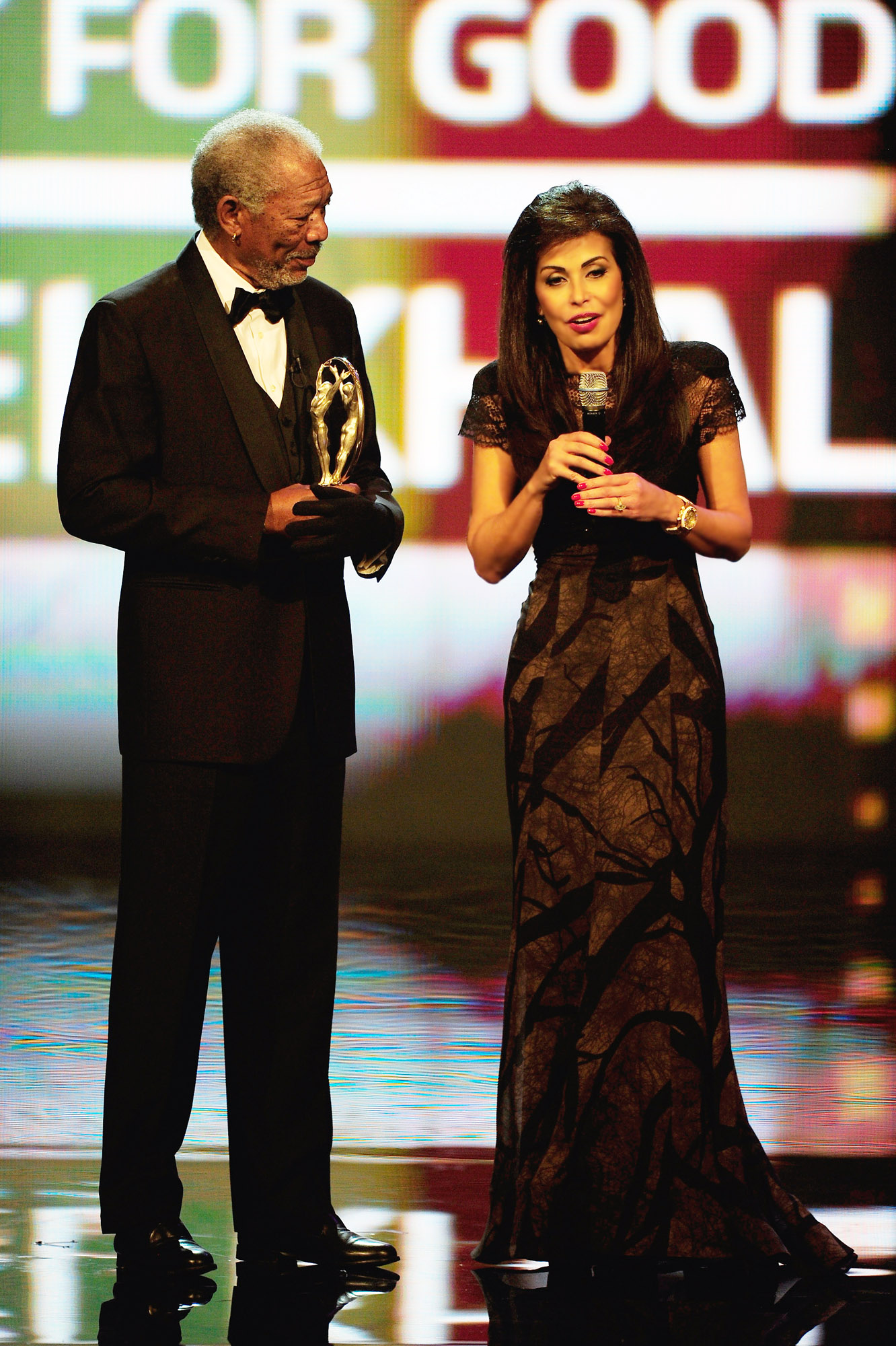 In her TED speech Mrs. May reveals that she was always a runner, so I asked her how this love for the sport first sprouted.

She told me her story: “I was young when got married, and went to Nigeria when I was 18 years old. I considered myself very lucky because I met the right man. So I lived there for 23 years and while there I developed my love for running and sports, and all kinds of activities. I always looked at myself as someone with a lot of inner strength, and sometimes with a lot of energy that needed to be steamed out—so sports was a way to let it out. At the same time—as I said in my speech—for runners not to be able to feel distances they need to keep their minds busy. That’s why I used to dream big, and the longer the distances I ran, the bigger my dreams became. This is how I became a marathon runner. It was good for my well being, it was a way to keep me fit, and at the same time it helped me a great deal to discipline myself.”

She also says it’s a good thing that she had all that strength being built up inside. “Doing sports is like investment in your body, and whenever you need it you will find it there. When my accident happened all the training that I did before was definitely there and helped me deal and helped me to come back, probably much faster than someone who never did sports,” she explains.

Her TED speech is truly inspiring, not only telling the story of her personal tragedy and how she began the marathon, but how that has in turn positively affected the lives of many in Lebanon. She was approached by TED—who heard she had an interesting story that fits the profile of what they do—to give a talk and she agreed to do it. Mrs. May admits that while she knew TED was a big deal she says she, “didn’t know size of the exposure and where this would take me.”

Her speech received a standing ovation, and Mrs. May says she was stopped 3 times during the talk because people were so touched. “Maybe they felt it was very honest and transparent. I was talking about my personal experience,” She says adding, “the audience was great. They are very cultured, supportive and genuine. The quality of people at TED is really remarkable.”

During the actual TED event the BMA story was featured on the TED blog. “They addressed the question of running for peace or running for a cause, and the BMA was the topic that people all over the world were expressing their opinions about. It was impossible not to notice it,” she says. 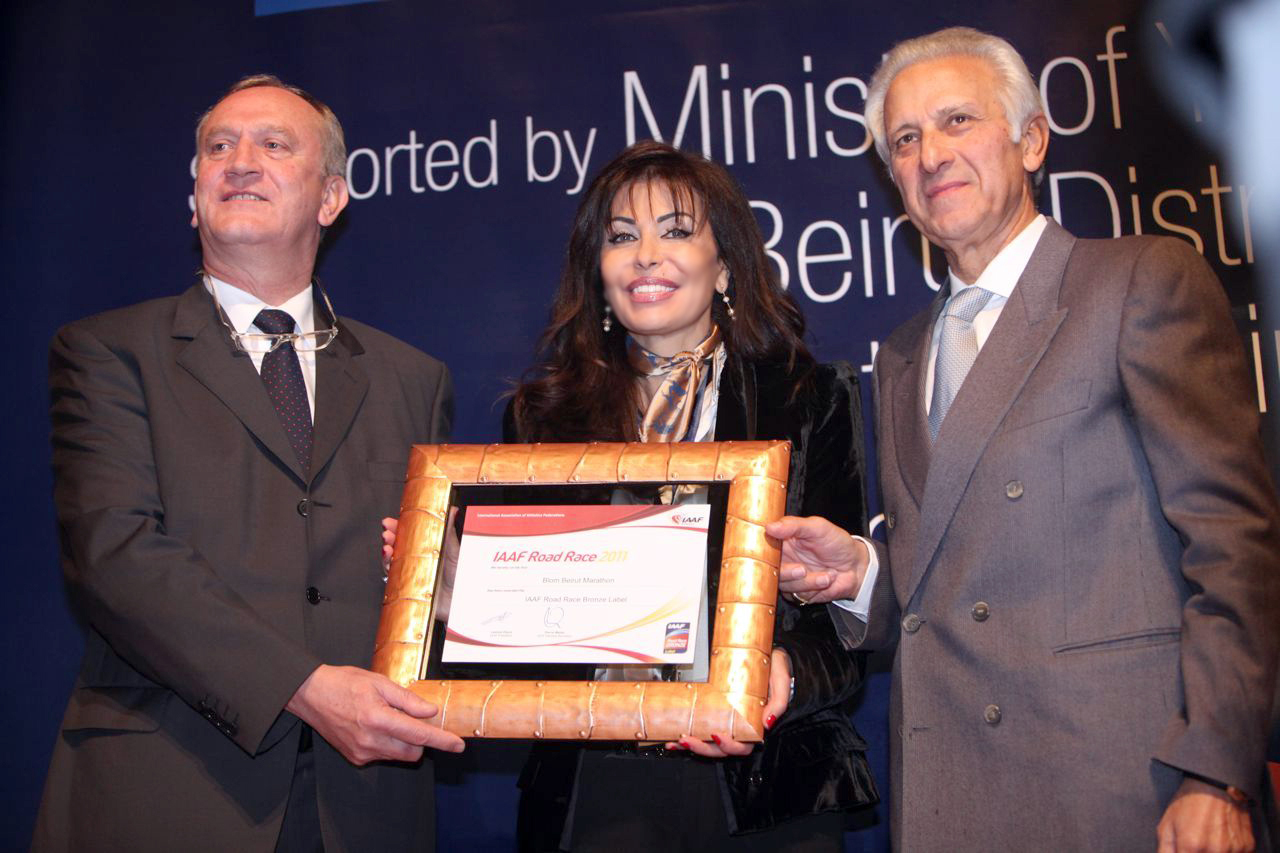 Since the speech has been released, several organizations have invited Mrs. May to speak and share with them her story. She received an email from long time American friends in New York who had heard her story from their pastor in church—which Mrs. May says is a testament to the reach of TED. “I’m really grateful for them. They took the Beirut Marathon from a Lebanese event (although it is international) to give it real international exposure,” she says, adding that this will definitely help BMA expand even further, for more marathons, more events and with the same values they sand for now.

“Thousands of people check the TED website daily. Now they are hearing about the Beirut Marathon, about Lebanon, the power of sports, the causes people run for and how people can run for peace and the strength,” explains Mrs. May. She adds that the most important thing is that it also shows the marathon is bringing people together irrespective of their backgrounds in a very fragile part of the world, and uniting them under the umbrella of peace. She brings forth the example of last week’s marathon launch at BDL. “It was very Lebanese, with the streets decorated with the flags—it was very national,” she says.

“Organizing a marathon in Lebanon is definitely different than organizing one in another country,” according to Mrs. May, where it’s more often about breaking records and sports. “Here its for unity, we are calling for them to run for their love of Lebanon. We encourage people to run for different causes and support NGOs, but at the same time we are still carrying a national call through our marathon. I hope with time we will be able to focus on brining more running elite but for the time being we can’t really live outside the regional challenges,” Mrs. May says.

She is also incredibly grateful for the Lebanese who support BMA. “Our success story is the result of the Lebanese trust in us, and the desire of the Lebanese to live in harmony. The Beirut Marathon’s execution is done through the passion and the incredible support that we have from the Lebanese, so all the credit goes to the Lebanese in general,” she states, adding that, “They look at the marathon as a vehicle to show the world who they are and their desire to live in peace and harmony.”

I asked her what the biggest lesson she has learned is. “When you ‘walk the talk’ people do listen, and with honesty and transparency, you can definitely achieve your goals,” she ascertains. “We’re definitely genuine in our message—the whole team—this message is for goodness, for the people of Lebanon and for the country itself, all the religions together and political parties together.” She is currently on her round of visits to various factions in the country, which she does every year and says is getting easier with time because people now trust the marathon. 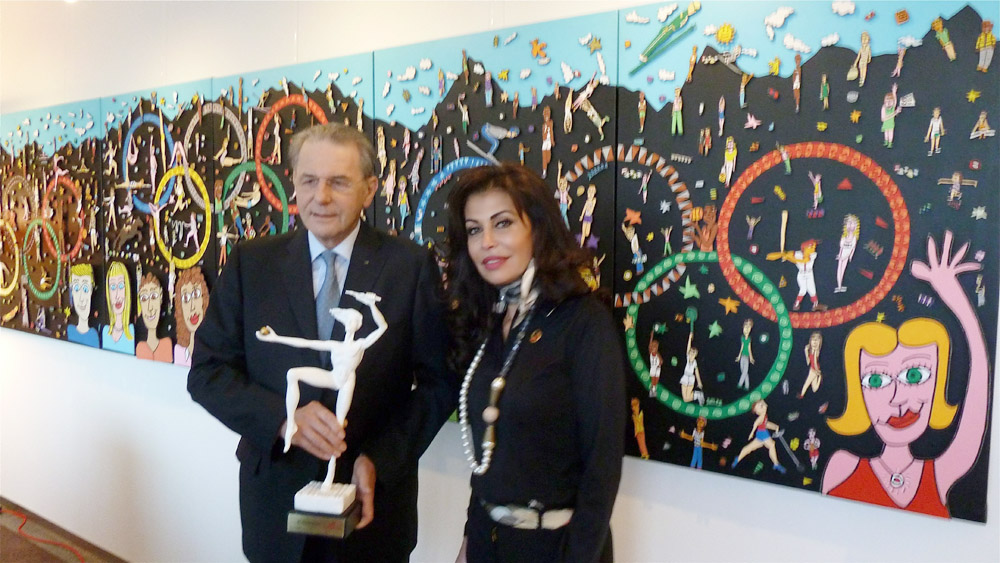 For all the hard work that goes into the organization and keeping people’s trust, Mrs. May Khalil has not gone unnoticed. She has received numerous awards, such as the prestigious Laureus Sport for Good Award in 2011, presented to her by Morgan Freeman, to the Achievers Award from Lebanon’s Ministry of Tourism in 2007, the Power of Sport Award from the International Sports Press Association in Lausanne in 2011, this year’s honorary doctorate from the Lebanese American University, and many others.

“Definitely the awards are great things, but they are not what makes you who you are. This tap on the shoulder is a good thing,” she says, but explains that there are other goals that are more important right now. The Beirut Marathon is currently at a bronze label, but Mrs. May has hopes it will reach silver and gold one day, and be one of the major international marathons. She says the biggest award is to see ongoing peace in the region, so that we can think of other issues, not the day-to-day problems we have right now.

“My biggest wish is to get out of this cocoon, to look at Lebanese society and see how to really make it better, for us and generations to come,” says Mrs. May adding, “we a reference for the world when it comes to quality of the Lebanese, who they are. We have so many great qualities, but unfortunately it’s all wasted with the political challenges that we face. I think the minute we get out of political dilemma people will be able to see the true colors of the Lebanese.”

The affable Mrs. May took a moment to thank the media for helping reach people’s hearts and left me with a few words of wisdom: “What I always share with my team is, continue dreaming big and don’t to be afraid because if you are, you’ll lose your focus. I always shoot, and then aim—and that doesn’t always work out!” she jokes, “but if you’re too calculated you lose your genuine touch,” she says.

Mrs. May states that, “the world needs people who can make a difference. Each of us is on a mission and BMA is my mission. It’s always good to dream, to dream big, and to fulfill that dream.”