Gate to Hell: Found in Turkey! 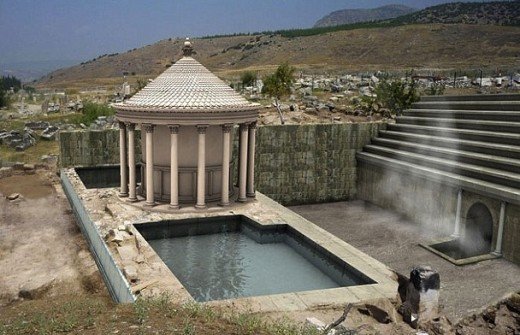 The alleged “Gate to Hell” has been discovered in modern-day Turkey.

Who would’ve guessed, given that you normally have to die to find it.

In all seriousness, a team of archeologists working in the ancient Phrygian city of Hierapolis in southwest Turkey claims to have located the Plutonium, or Pluto’s Gate.

That’s an ancient pilgrim site considered the “entryway to the underworld.”

In this place, they play the Kim Kardashian sex tape on a 24-hour loop.

A small cave near the temple of Apollo, the Plutonium became associated with death from deadly gases it emitted (see photo above) from beneath the surface.

Francesco D’Andria of the University of Salento announced the discovery at a press conference in Turkey in March, according to La Gazzetta Del Mezzogiorno.

D’Andria told Discovery News he also found remains of the temple, a pool used by pilgrims, and a series of steps descending under the surface:

“We could see the cave’s lethal properties during the excavation. Birds died as they tried to get close to the warm opening, instantly killed by carbon dioxide fumes.”

Austin Considine explains for VICE that the cave is a natural phenomenon, and that similar “openings in the earth’s crust” can be found elsewhere:

“Such noxious portals are found around the globe. Undoubtedly the coolest, a modern day hell gate in Turkmenistan has been burning for over 40 years.”

The geologists who accidentally created that portal decided to light it on fire to protect area residents from the gases, and it’s been burning ever since.

Hell or not, the new discovery has been exciting for geologists.

Hierapolis, near the modern Turkish city of Pamukkale, has been labeled a UNESCO World Heritage Site and sees more than 1.5 million visitors each year.