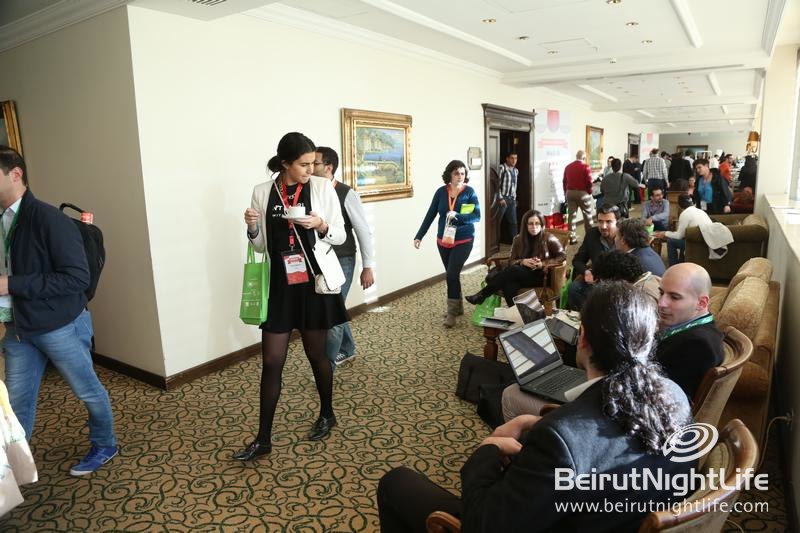 The official opening ceremony of ArabNet Beirut Conference 2014 was held this morning at the Hilton Beirut Habtoor Grand hotel, organized by ArabNet in collaboration with the Central Bank of Lebanon, and in strategic partnership with Bank Audi, Beirut Digital District, and Digital Media Services. ArabNet Beirut brings together more than 70 speakers, 40 sponsors and partners, and 600 attendees to discuss the latest trends and opportunities in digital business and entrepreneurship.

The opening was attended by Deputy Hagop Pakradounian, representing H.E. the Speaker of the Lebanese Parliament Mr. Nabih Berri, and Minister of Information Ramzi Jreij representing the Prime Minister Tammam Salam. In his opening speech, Harb ensured that “Lebanon is rich in the creative energies and technical skills of its youth, which has the potential to make it a central hub for the production of Arabic digital content, development, design, innovation and new digital applications.”   He also announced that he has “proceeded to solve the accumulated problems that are impeding the work of the ministry in staying abreast of the world of telecommunications that is evolving dramatically,” and that he’s re-arranging the house internally and mending relationships between the general directorates within the ministry including Ogero.

Harb relayed the greetings of H.E. President Sleiman, especially to those organizing the conference and its participants, as well as his appreciation of the cutting-edge insights and highlights about technology that participants are used to receiving at this event, which are contributing to enriching the knowledge economy in the Arab countries. He added “today, we are gathered with a select group of competent men and women, from the region and beyond, who have contributed with their research, culture, and work to a revival in the digital economy, at a time when questions about why governments, particularly in the Arab world, are not keeping up with the astonishing developments in the world of telecommunications are abundant.” Harb posed some questions: “does it make sense that governments continue to fall behind in this digital age, while the youth and the private sector continue to make immense strides? Should it be acceptable that the legislation for electronic contracts, for example, is still pending approval, when our delay on this front has an immense impact on local and global economic activity, and when an electronic signature could save us the trouble of taking a flight to complete a transaction, or the time it takes waiting for a package to arrive by mail?”

Harb added that “the knowledge economy can help reduce unemployment, especially amongst youth; in 2011 and 2012, the knowledge sector accounted for approximately 25% of the European economy. Yet despite the proven benefits of the knowledge economy, we see the youth of Lebanon being forced to leave their country and families, carrying their degrees and competencies with them, and enriching knowledge economies abroad, with their skills and know-how.”

Harb also noticed that: “in recent years, Lebanon has tried to modernize and develop its infrastructure in order to become the main digital platform in the region and  join the ranks of pioneering digital nations by the year 2015.The Lebanese state has exhibited a great interest in the digital domain, through the plans It has put forth for fiber optic connections, International Gateways, IP/MPLS for fixed-line telephones, the Alexandros submarine cable to increase international capacities to 700 gigabytes, the IMEWE cable and 3G and 4G connections for mobile phones. The Lebanese government has also set the regulatory framework for digital zones and the legal framework for preferential tariffs, and has also provided access to infrastructure for the aforementioned zones, with the hope that they become factories that produce digital services with added value, equipped to create job opportunities.”

He also pointed out that: “There is no doubt that the Lebanese and visitors to Lebanon feel the extent of the results of these investments in telecommunications, as the number of Lebanese mobile subscribers has risen to 3.8 million, and Internet speed has increased over fixed and mobile networks, and God willing, there will be greater prosperity with the up-coming high-speed fiber optic network, which will be spread, successively to the different Lebanese areas, so that DSM coverage reaches all Lebanese areas, along with 4G.”  Harb added “our youth, who are creative in the worlds of digital, information technology and telecommunications, and who are investing their competencies and energies for the sake of society, whether in Lebanon or abroad, are going to continue forward with the same enthusiasm and persistence, doubling their innovations and the technological services they are providing to the world, enabling Lebanon to rebuild itself on the foundation of this knowledge economy.”

Harb mentioned that “Lebanon has launched several free economic zones to serve as digital meeting points for stakeholders, suppliers, operators, programmers, developers, investors, and entrepreneurs, and in order to place Lebanon within the ranks of nations that are advanced in providing digital services. Of these free economic zones, for example, Beirut Digital District was launched recently in the heart of Beirut.” Harb added that the launch of the free economic zone in the Batroun Caza, in which “we are collaborating to achieve with the Maronite Association and the Archdiocese of Maronites in Batroun, which announced its willingness to donate the land for the project. We are focusing this free economic zone on digital, light and clean industries to protect Lebanon, especially the Batroun Caza, from environmental pollution, and in order to curb the migration of Lebanese seeking employment, through newly forged conditions which will be favorable for creative production, innovation and skilled endeavors.”

Harb pointed out that “external demand is greater in size than the internal market,” and that Lebanon is rich in the creative energies and technical skills of its youth, which has the potential to make it a central hub for the production of Arabic digital content, development, design, innovation and new digital applications. Harb stressed on how Lebanese citizens are “spread across the globe, will compensate for losses resulting from the migration of its youth with the successes its people achieve, like Atheer Labs’s smart glasses, which compete with Google Glass and were launched by Suleiman Itani, an innovative Lebanese living in California who is boosting the country’s reputation.”

Harb ended his speech that he has resolved, during the short term of this current government, to “take the most important step of placing the Ministry of Telecommunications back in the service of all Lebanese, through a commitment to a culture of respect for laws and their implementation, and this is what will equip this ministry to perform its national, technical, economic, and security roles in the best form, in order to stay abreast of the rapid movement of development in the world of telecommunications.”