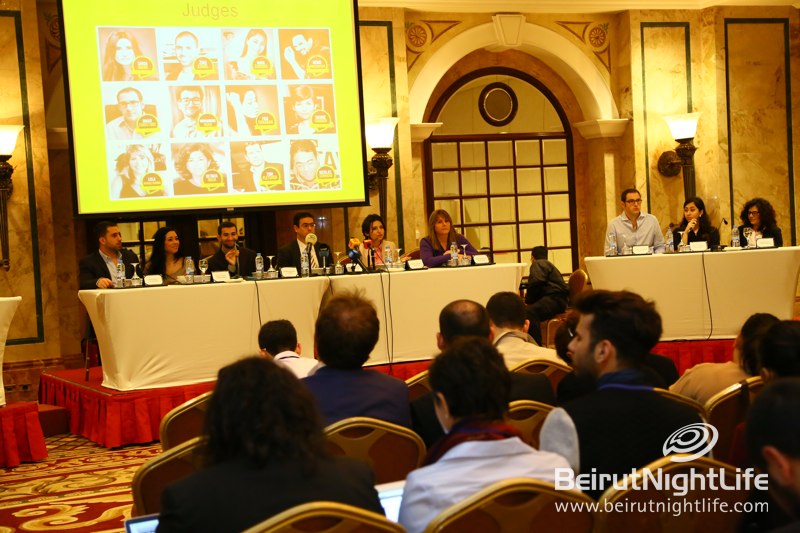 Beirut, Wednesday 27th March 2013 – During a press conference held at Phoenicia Hotel and following a one-month nomination phase from the online community and with over 600 nominations collected across 32 categories, the finalists have been announced by the judges’ panel opening the round of online voting.

The press conference was attended by Lebanese Minister of Telecommunications H.E. Mr. Nicolas Sehnaoui, who expressed his support to this initiative and hoped that this event will encourage social media in Lebanon and the process of online content creation. Also were present media people and social media people who live-tweeted the event.

Social Media Platforms have become a staple in the day to day life of the Lebanese population with over a third actively using Facebook. This is what has driven many brands, public figures, and even politicians online to interact and engage with their audiences in a more meaningful way. Seeing that intrinsic change in social behavior, the Online Collaborative in partnership with RAGMAG Magazine has sought to honor the individuals and organizations who have demonstrated an exceptional presence in the social media space through the Social Media Awards.

“Since inception, RAGMAG Magazine has been actively engaged with the Lebanese social media community. It was a natural progression when the Online Collaborative approached us with the offer of Strategic Partnership for the first annual Social Media Awards since a great deal of our focus is maintaining an engaged dialogue with our readership,” said Fida Chaaban, Editor-in-Chief, RAGMAG. “We’re pleased to stage the official Social Media Awards after Party in collaboration with BlackBerry Middle East. As firm believers in Lebanon’s online community, we look forward continuing the ongoing conversation,” added Chaaban.

In order to ensure nominees are evaluated fairly beyond the numbers of likes and followers, the SMAs have summoned a team of judges who are pioneers in the social media realm within their industries and who use social media in an exceptional manner.

The panel of judges includes Lebanese Minister of Telecom H.E. Nicolas Sehnaoui and British Ambassador to Lebanon H.E. Tom Fletcher among other notable personalities from the business, academic and media fields. Following online nomination submissions from the online community the judges have evaluated the nominations across different criteria and have announced the successful nominees that will advance to the next round, passing the torch back to the online community that will have a fifty percent say in voting for the winners. Beginning April 1st, voting will commence at www.smabeirut.com

“We are glad to support the SMA event, which aims at rewarding the online communities for their creativities because we believe that the online influencers have today become opinion leaders in our society… Allow me as well to take this opportunity to congratulate all the nominees on their efforts and wish them luck in this competition,” said Mrs. Aline Karam, Alfa’s Chief Communication Affairs Officer. “Amid the booming and progression of the digital technology in Lebanon, we as Alfa are playing a major role in fostering a supportive environment that caters to the needs of mobile users and tech-lovers in Lebanon, by providing latest technologies in mobile especially 3G and 4G-LTE.”

The SMAs will culminate in an awards ceremony at Beirut’s Phoenicia hotel on April 29th, 2013, bringing under one roof both offline personae and Lebanon’s top bloggers, most engaging personalities and brands with whom most of us can only interact online. By making the SMAs an annual event, the Online Collaborative wishes to empower the alternative online medium and its active collaborators promoting and demonstrating the undeniable power the internet has in driving change across all aspects of our lives.

As for Ms. Peggy Khoury, E-Commerce Assistant Manager at the Phoenicia Hotel “Taking part in the first Social Media Award in Beirut is taking another step, as Phoenicia Hotel and as individual citizens, to support, encourage and award the initiatives and creativity of the Lebanese online community, which we strongly believe has a powerful voice and increasing influence over the perception & reality of the country seen both from the local and global community perspectives”.

The annual Social Media Awards (www.smabeirut.com) allow the Lebanese online community to nominate, vote for and award the bloggers, journalists, content creators, community managers, public personae, users of social media, and celebrities for their efforts in communication and online creation.

ABOUT THE ONLINE COLLABORATIVE

Online Collaborative (www.onlinecollaborative.org) is an NGO that began at the American University of Beirut and now is actively expanding to different universities and schools in Lebanon. Online Collaborative seeks to group social media enthusiasts and experienced individuals in the digital media world to help promote proper digital citizenship through making the most of social media in the best ways possible. Spanning over 120 members, the OC has already organized many successful events and training in Lebanon such as GeekFest Beirut Music & Fashion in 2012, the Social Media Changing Lives conference in 2011, Blogging Lebanon Conference in 2010. The OC also actively seeks to provide support to various local and regional events in providing online coverage and community crowdsourcing.