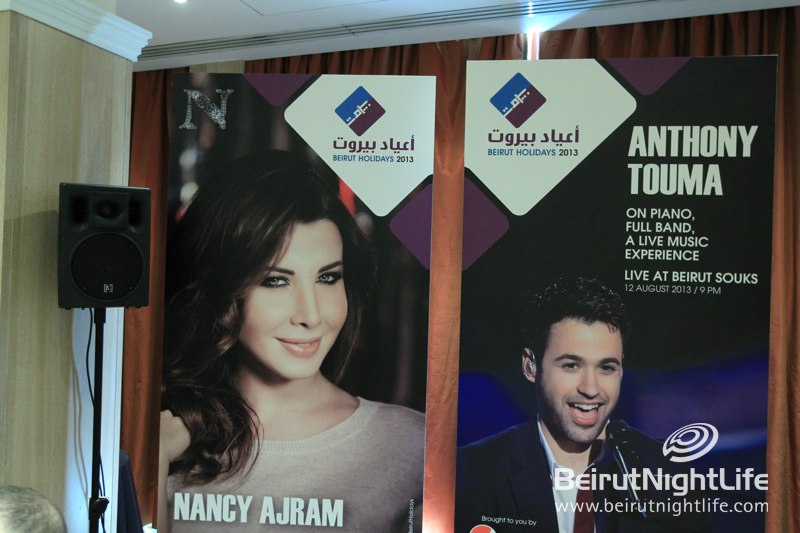 The second Beirut Holidays event is being held this year at the Beirut Souks and we’ve just found out who’s performing. At a press conference on Wednesday at the Warwick Palm Beach hotel it was announced there’s going to be 9 days of music, entertainment and arts right in the middle of the beautiful city of Beirut. Last year’s festival was a huge success, with exciting and dazzling shows wowing the crowds, and this year promises to be even more exciting!

Pop icon and multi-platinum superstar Nancy Ajram will kick off the festival on August 9 with a show for all ages. This will be followed on August 10 by talented Syrian artists Safwan Bahlawan and Samar Kammouj in a tribute to the great Mohammed Abdel Wahab, as well as maestro Adnan Nmeir with a musical band. On August 11 Wael Kfoury the “prince of romance” will take to the stage for a night of new and old romantic songs. Anthony Touma from The Voice, along with a band and special guests, will be performing his interpretations of popular songs on August 12. Living legend Mr. Sabah Fakhri will take to the stage on August 13 with his authentic Arabic tarab as well as Koudoud Halabiya unique performance. Then on August 15 and 16, it’s the modern ballet troop Boys of Dance, dancing “Rock the Ballet” to songs by the likes of Queen, Michael Jackson and Coldplay. On August 17 we’ll have the honor of listening to the lovely voice of Lebanese Diva Elissa. Last but not least on the program on August 18 is the Lebanese pop folk band Adonis.